Home » Lifestyle » What's That? You're Planning a Trip to Amsterdam and Don't Know Where to Start?

“Your country—it used to be better, but now I think it’s not so good,” said my Uber driver—politely, of course—as we zipped from the Hortus Botanicus over to the IJ River. I was in Amsterdam with my mom just a week after the leaked draft of the SCOTUS decision that would overturn Roe v. Wade hit everyone’s newsfeeds. Our trip had long been in the works (or, you know, whatever that means in Pandemic Times) and yet it came at a moment when I felt especially ready for some physical distance, and perspective, between me and America.

I had prompted my driver for his thoughts after spending the first half of our ride commenting on how damn clean his city was—I hadn’t spotted a single speck of litter, and the sidewalks lining every canal were covered with blooming potted plants and colorful rose bushes that crawled up painted brick facades. Oh, and there was hardly any traffic. No snarls of honking cars or plumes of sooty exhaust. Everyone, truly everyone, zoomed around on bikes.

So yes, I was feeling pretty charmed by Amsterdam that afternoon in the car. Which might come as a surprise to those of you who visited the city during your semester abroad and spent a hazy weekend getting stoned in the Red Light District and subsisting on a diet of French fries with mayo and Amstel Lights. If that’s your impression of Amsterdam, you’ve gotta go back now that you’re in your classy adult era. There are amazing restaurants, fabulous museums, and gorgeous things to look at around every corner. Bonus points if you go with your mom, though I can’t promise she won’t point out every handsome man she sees (the thing is…there are just so many of ‘em).

Here’s how to make the most of a mother-daughter trip to Amsterdam.

Full disclosure: The editor received a partially comped stay, a few meals, and activities while researching this trip.

That would be the Pulitzer, and I’m taking no further questions at this time. If you look up the word “chic” in the dictionary, I’m pretty sure you’ll find a pic of this hotel. Located on the Prinsengracht canal in the elegant Nine Streets neighborhood, the Pulitzer—an intricate labyrinth of 25 17th and 18th century canal houses—is both luxurious and hip. Considered to be Amsterdam’s oldest five-star hotel, it oozes historical charm (the courtyard garden will make you drool), but the permanent art collection delivers a hefty dose of cool.

Let’s talk about the art collection for a sec. First of all, it’s super eclectic. Nearly every inch of wall space in the serpentine hallways is devoted to something quirky and colorful. I’m told that in the Art Collector’s Suite hangs the renowned painting “Hals Brunch” by Thierry Brut. At six meters long (that’s nearly 20 feet, dear Americans), it’s said to bear a striking resemblance to “The Last Supper” by Leonardo da Vinci—but upon closer inspection, you’ll see that Brut included fixtures of modern life, like laptops, hamburgers, and cans of beer. Cheeky. 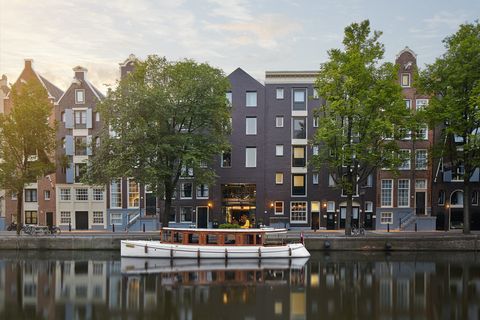 My mom and I stayed in one of their “generous” rooms, which was probably the most spacious hotel room I’ve stayed in…ever? The ceilings were high, we had two massive windows overlooking the central garden that let in lots of natural light, and plenty of floor space so we could move about without fear of constantly tripping over each other’s suitcases. I have a thing for hotel bathrooms and this one did not disappoint—decked out in white marble, our loo also nailed that hard-to-do combo of elegance and modern design.

Also important: The endless supply of stroopwafel waiting for you after every turn-down service (keep on scrolling for a visual—basically you can’t leave Amsterdam without trying and Instagramming them).

I guess this comes with the territory, being the hospitality biz and whatnot, but everyone I encountered at the Pulitzer was exceptionally warm and welcoming. Against all odds, the concierge helped us push back a dinner reservation at a “beloved” (his words) restaurant at the last minute, and was always available to advise us on our itinerary. The staff at Jansz. (their light and airy restaurant) and Pulitzer’s Bar (the cozy glam cocktail spot) made us feel comfy and right at home (and, you know, full of martinis). Zero White Lotus vibes, whatsoever.

Last thing I’ll say about the Pulitzer lest you accuse me of gushing: It’s perfectly positioned so that you can walk ev-er-y-where. From our hotel, we walked to the Anne Frank House (5 minutes), the Rijksmuseum (20 minutes), Dam Square (10 minutes), and all over the cute streets of the Jordaan neighborhood. When we needed to travel farther afield, the concierge team was always around to hail us a cab, which would show up in less than 10 minutes. 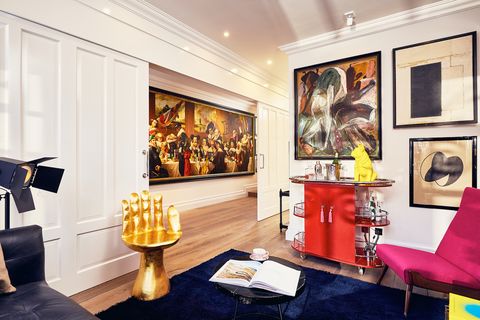 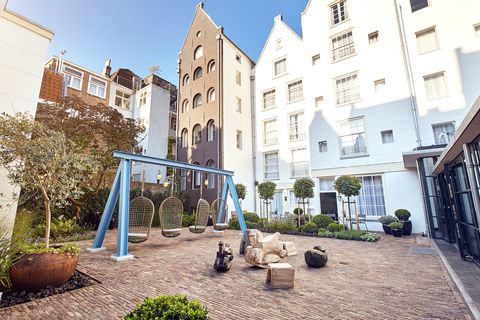 What You’re Seeing and Doing 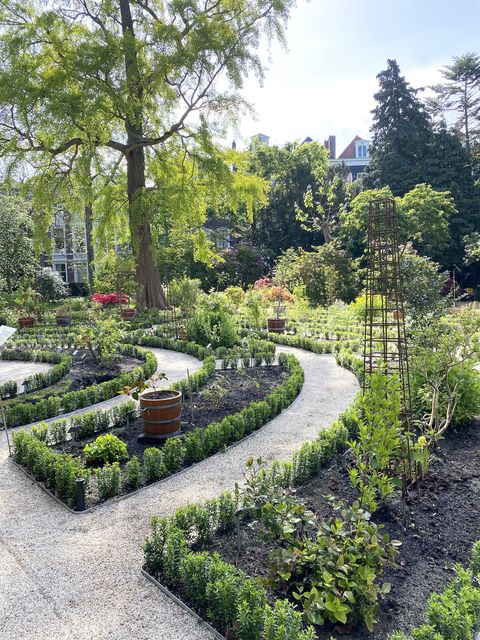 I didn’t really know what to expect from Dutch cuisine before I arrived. My mom kept on talking about this pub snack called “bitterballen” that involved deep-frying meatballs, and I had read that it was tradition to dip fries in “pindasaus,” a satay sauce that sounded a whole lot like peanut butter to me. My cholesterol and I braced for impact…

…And then I had some of the loveliest, freshest, most vegetable-forward-iest meals. Here’s a hit-list of the best restaurants we visited in Amsterdam:

If you’re looking to grab a quick bite, I’d also recommend any of these casual spots: Cafe t’Smalle near the Anne Frank House, Cafe Luxembourg in Het Spui, and Restaurant Café von Puffelen for your bitterballen experience. Also, you have to stop in at least one “brown cafe” (named so because of the tobacco stains that have permanently altered the color of the wall) for a beer while you’re there—these spots are apparently where locals go whenever they’re in the mood for a casual drink.

Watch out for bikers! I collided with a biker in the first 30 minutes of my trip. Look both ways, and then look both ways again. They won’t stop or slow down for you.