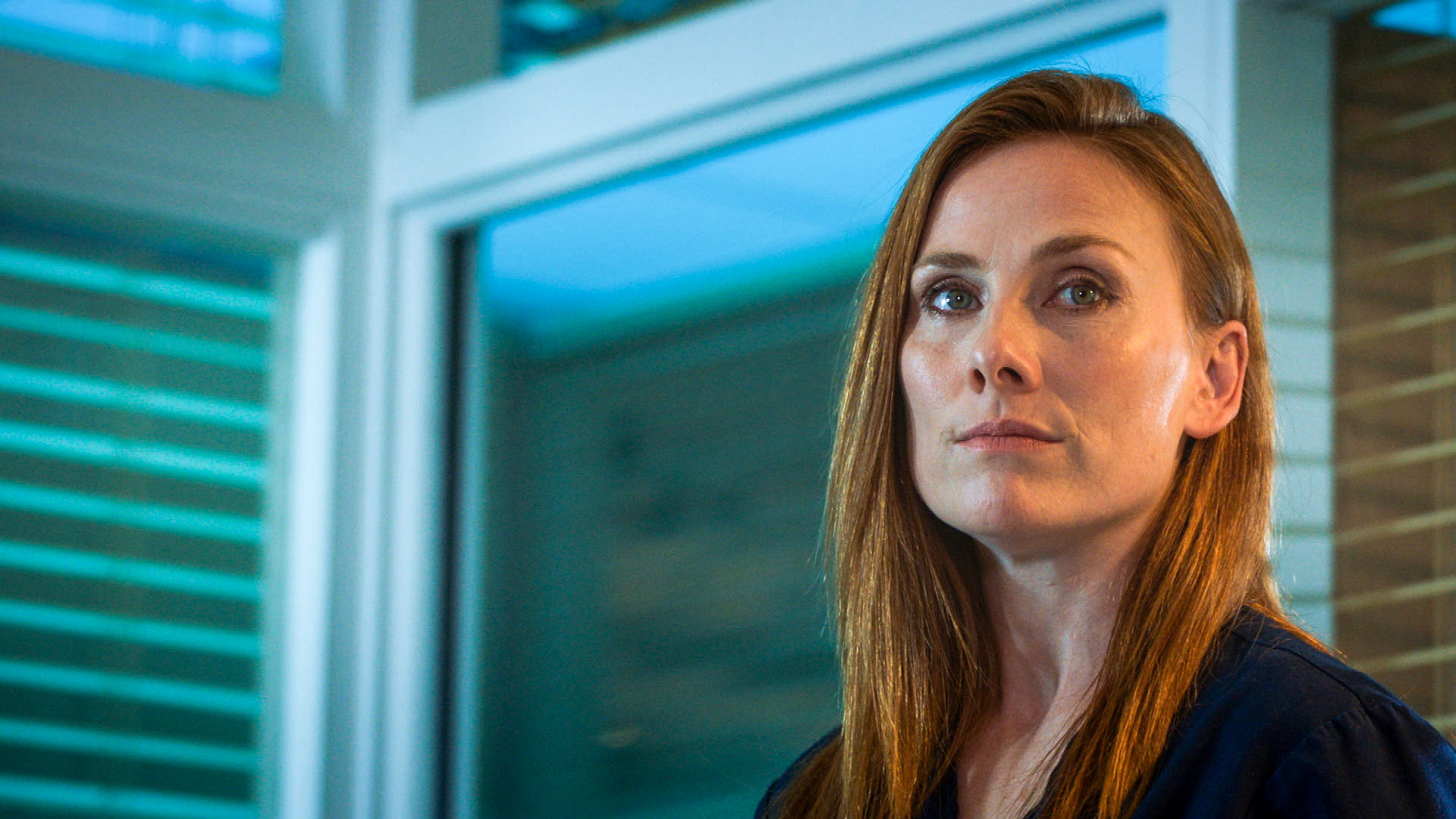 After fifteen years, Jac Naylor (Rosie Marcel) in Holby City finally decided it was time to say goodbye to the hospital she had spent so much of her life in.

The formidable Jac Naylor, the ice queen, whatever you may call her, Jac Naylor leaving Holby City Hospital was a huge moment for so many Holby fans tonight.

After a dramatic concluding scene in last week’s episode that saw viewers on tenterhooks wondering who on Darwin had been shot, tonight we finally discovered that while Jac, Kian (Ramin Karimloo) and Chloe (Amy Lennox) hadn’t been shot, Sarah Jane’s (Rose Escoda) mad boyfriend shot a security guard, and held everyone hostage until the police intervened.

Despite Jac not being shot, she wasn’t going get away from the situation without having a gun pointed at her…again. After the situation had calmed, Jac wandered the Darwin Ward looking for Kian, only to discover he was looking for drugs to cope with the severity of what had just happened, much to Jac’s disappointment.

Jac completed Sarah Jane’s operation and soon concluded that she had had enough of Kian relying on her, and following Max’s (Jo Martin) shock that Jac had resigned, she wondered why Jac was choosing to leave, only for her to tell Max that she’d ‘walk away from lies’ following Kian telling her he was ready to get clean.

Jac Naylor has been a staple of Holby City for so long, and many viewers won’t know Holby City without Jac, so we’ve decided to take a good look at Jac’s life in Holby, and why her departure will change so much:

One of the words we’d used to describe Jac is independent. Throughout her time she made it quite clear that she was a powerful force on her own. Coming from a difficult childhood where Jac lived with several foster families, she was considered a threat in the early years of her career and was often ostracised at medical school because of her talent. During the fifteen years at Holby, Jac spent most of them very much establishing that she can survive and live well on her own, but that certainly didn’t mean she didn’t make friends along the way. Despite her initial disagreements with Nicky (Belinda Owusu) and Zosia (Camilla Arfwedson), Jac was around to help the two of them when they needed her. Jac’s independent yes, but she has a kind and loving heart that means her friendships mean so much to her (even if she’s too afraid to admit it herself).

Jac’s friendship with Sacha Levy (Bob Barrett) has been a beautiful one to watch develop over the years. Sacha and Jac have been there for each other through the darkest moments of their lives. Jac supported and help Sacha through his depression and even though Jac was too unwell to see that Sacha was trying to help her during her breakdown in 2019, he was still there for her. Fact is, Jac is always there for her friends and the people she cares about. Even more recently, when Sacha was experiencing ‘complicated grief disorder’ that saw him behave in ways towards Jac that we have never seen before, she was always there.

With Jac gone, and suspicions that Jodie Rodgers (Sian Reese-Williams) will return for revenge on Sacha, his best friend not being there will certainly have a greater impact on him.

Jac had a gun pointed to her in tonight’s episode, but as viewers are fully aware, that isn’t the first time it’s happened. Back in 2017, a storyline began for Jac that would change her life forever. Fredrik Hanssen entered the hospital holding a gun and went on a serious shooting spree, shooting Jac and leaving her for dead. Luckily, Henrik (Guy Henry), Sacha, Essie (Kaye Wragg) and Professor John Gaskell (Paul McGann) were in the hospital basements and discovered Jac had been shot, and worked together to patch her wound up until they were able to go to theatre to save her life. This shooting led on to the real reason for mad Professor John Gaskell’s arrival, as he proposed to Jac that he would perform an intense operation that was part of his research project that saw him insert a dodgy implant into Jac’s back, which led to her almost becoming paralysed.

Jac’s life being in danger was a huge moment for the team. No one knew the truth about what Gaskell had put into Jac, which resulted in a race against time as they all worked together to try and find out how to reverse what the crazy Professor had done, and save Jac’s life.

Throughout this trauma, Jac’s half sister Jasmine coming into her life, evil Fran and everything else Jac has put herself through resulted in her breaking down in Fletch’s (Alex Walkinshaw) arms. This panic attack was heart-breaking to watch, with many viewers calling it the most accurate depiction of a panic attack on screen that they had ever seen.

Throughout 2019, viewers watched Jac’s life spiral downwards as she began to struggle with her mental health. Jac’s paranoia grew over the thought of her daughter Emma being taken away from her and add this to Professor Elliot Hope (Paul Bradley) returning and falling unwell, the pressure of performing Elliot’s operation and her increasing overwhelming emotions became too much for Jac, which resulted in another traumatic breakdown that led to her being sectioned. The episode, titled ‘Bell Jar’ impacted viewers in ways that saw them reach out to Rosie and tell her about their own mental health struggles, the breakdown scenes of this story became high on the list of Holby City’s most memorable narratives ever.

Jac’s trauma with Gaskell, her recovery, her mental health battles, who was always there? Fletch.

‘Our friendship means a great deal to me’ Jac told Fletch’s daughter Evie (Phoebe French) in an episode. Put Jac and Fletch’s characteristics together on paper and people would tell you they would never get on, which was why we couldn’t take a look back at Jac’s life in Holby without mentioning her friendship with Fletch. What started as Fletch annoying Jac with his new director of nursing job eventually led to the two of them having to address the chemistry between them. Fletch certainly was an unlikely person to be Jac’s love interest, and while Jac ended up telling Fletch they could never be together, he’s always been there when she needed him, another example of how vital Jac’s friends are to her.

The many relationships Jac has had over the years have been interesting journeys to say the least. From the love triangle with Joseph (Luke Roberts) and Faye (Patsy Kensit) to becoming a mother after sleeping with Johnny (Michael Thomson), all of Jac’s love interests have impacted her life in huge ways, but commitment and plenty of other aspects all meant they led back to her remaining to be the strong independent woman we know and love.

The clashes with other people and iconic one liners are two major things we will miss now Jac has gone. Whether Jac was in the right or the wrong she was prepared to go to hell and back to make sure she won an argument with Max, Zosia, Connie (Amanda Mealing) and so many others.

Ultimately, what’s changed Jac forever is her daughter. She struggled to commit to being a mother but the life threatening situations she has been faced with, and even in tonight’s episode where she thought about Emma in the moments the gun was pointed to her, allowed her to realise it was time to stop, time to say goodbye to hospital life and be a mother.

So whether you remember Jac as the fierce doctor who was never afraid to say what she thought or the doctor who has been through so much in her life but underneath her front she puts on she’s actually a kind and loving person, Jac’s exit will leave a huge hole in so many people’s lives.

Her reign may have come to an end, but all that Jac has done over the years will impact Holby City Hospital and the people who work there forever.