The moment went down during a Facebook Live concert on Friday to celebrate the release of her fourth studio album.

Willow Smith might have been offering up a revamped pop-punk take on her iconic “Whip My Hair” track, but the artist would not be whipping her hair by the end of it — because she didn’t have any left.

Reprising a stunt she’d first pulled on tour back in 2012, per E! News, the daughter of Will Smith and Jada Pinkett Smith shared the surprise moment with her fans toward the end of her “Willow in Concert: lately I feel EVERYTHING” event on Facebook Live.

The first time she did it she was only 11 years old, riding the surprise success of “Whip My Hair” on a tour Will revealed she was not into. The actor opened up about the incident back in 2017, admitting that he’d been pushing her to continue the tour as she was ready to quit only five shows in (with 30 to go).

Waiting for your permission to load the Facebook Video.

So one night, she simply saved her head during the live performance. “I’m looking at that girl and I’m like, ‘Got it. I understand. You will not have this trouble out of me ever again. Let’s go, baby. We can go.”

Will was speaking on fatherhood as part of Jay-Z’s “Footnotes” for his own album release for “4:44,” and in particular his track “Adnis,” inspired by Jay’s relationship with his own father, Adnes Reeves.

“For me, it was that soldier that was pushing and wasn’t paying any attention whatsoever to what was going on emotionally with this beautiful little creature in front of me,” recalled Will. “And that was the first part of the collapsing of my father’s suit that I was wearing that wasn’t mine.” 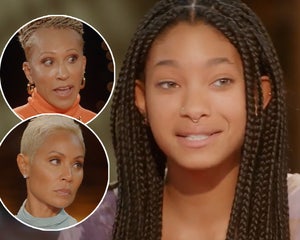 This time, fans had already seen the look on social media, as Willow’s bold on-stage move inspired her mother and “Red Table Talk” co-star, Jada, to follow suit. And this time, rather than as an act of rebellion against the tour, Willow did it on stage, during that song as a statement that she had full control of her career and path.

Jada shaved her own head, with the women sharing their shorn looks in a beautiful mother-daughter post on Instagram July 12.

“Willow made me do it because it was time to let go,” she captioned the image. “BUT … my 50’s are about to be Divinely lit with this shed.”