An ex-wife has shared the incredible gift she received from her ex-husband’s ‘other woman’, who has said ‘sorry for sh******’ him.

Elizabeth Lindsay, from Scotland, revealed how her partner’s mistress, who didn’t realise he was married at the time, sent her biscuits to celebrate the one year anniversary of her leaving her husband.

In a viral TikTok video, that has received over 165,000 views, Elizabeth explained how the two women have since bonded after discovering the man’s lies and affair. 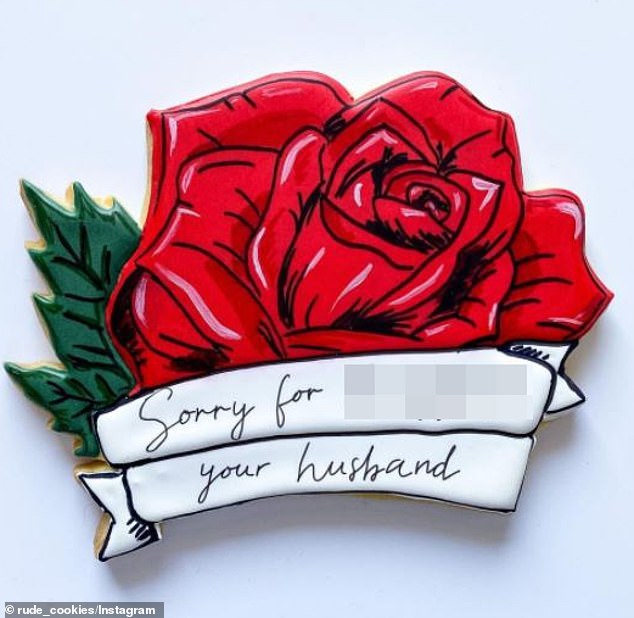 Elizabeth Lindsay, from Scotland, shared the incredible gift she received from her ex-husband’s ex-mistress – with one cookie reading: ‘Sorry for sh****** your husband’

Opening the gift from the ‘other woman’, she revealed a box of cookies poking fun at her ex – including one reading ‘sorry for sh****** your husband’ and another saying ‘sisters before vertically challenged misters’.

In the clip, Elizabeth recalled how her partner lied to both women throughout the affair by using a fake name – before eventually being busted.

The two women have since struck up an unlikely friendship and on the one year anniversary of her split, the ex-mistress sent a package of symbolic cookies to her new friend with hilarious messages written on them in decorative icing. In a TikTok video, Elizabeth explained how the two women have struck up an unlikely friendship and the other woman sent biscuits to celebrate the one year anniversary of the split 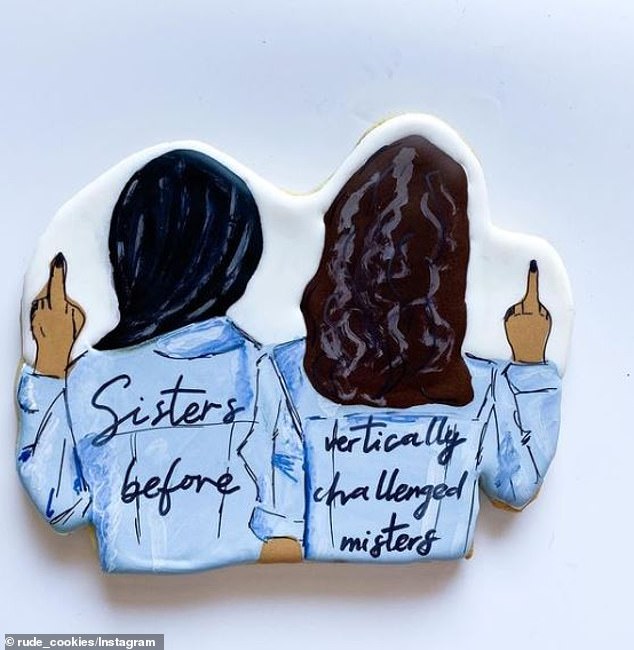 Opening the gift made by Rude Cookies, based in Glasgow, she revealed a box of cookies poking fun at her ex – including one saying ‘sisters before vertically challenged misters’

Elizabeth said: ‘It’s the anniversary of me leaving my husband, so the lady – who was having an affair with him didn’t know his real name and was being quite badly abused by him – gave me a present.

‘So I’m just going to explain the present, it’s cookies!’

She held up the first cookie which was shaped like a small, smiling penis, with the name ‘SlyBry’ written on it in icing, which she explained was her ex’s nickname.

‘This one is his nickname – modified a little bit’ she laughed. 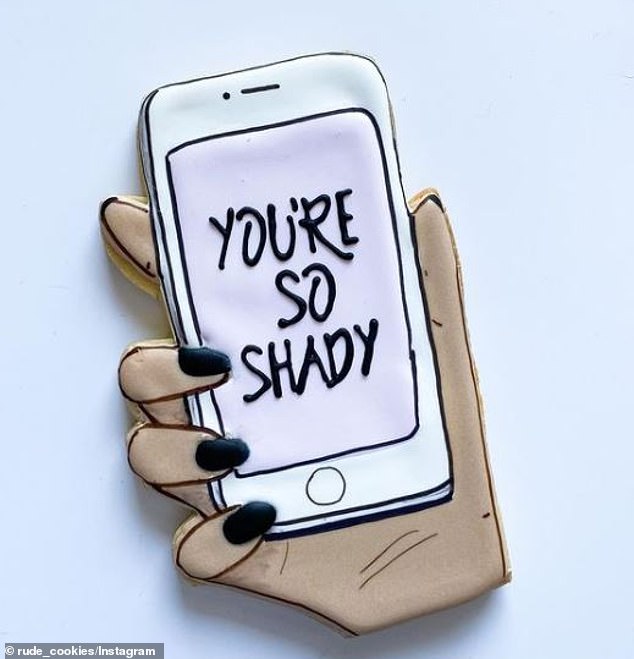 The next cookie she showed to the camera was shaped like an iPhone, held in a woman’s hand with the words, ‘You’re so shady’ written on it in black icing.

Elizabeth explained: ‘The night that I caught him with the affairs and finally had proof and was speaking to the girl, he caught me speaking to her and was pushing through the door shouting at me and calling me “shady”, saying that I was being shady – well who’s the shady one?’

Another cookie showed two women facing backwards, with the words, ‘Sisters before vertically challenged misters’, written on the backs of their jackets.

The final cookie was a red rose, as Elizabeth explained that she loves the flower, with the words: ‘Sorry for sh****** your husband’, iced beneath it.

TikTok users flooded to the comment section to to voice their approval of the pair’s friendship, with one writing: ‘Women supporting women’

TikTok users flooded to the comment section to to voice their approval of the pair’s friendship, with one writing: ‘Women supporting women… with the best sense of humour humanely possible.’

Another wondered how the cookie shop felt about receiving the order, commenting: ‘I can only imagine the person she ordered this from being so confused and amused’.

The business who made the biscuits, Rude Cookies, based in Glasgow, took to their Instagram to share their support for the two women, writing: ‘Such an empowering story – more women should be like this!’