Home » Lifestyle » Would you send your boss a selfie in a skirt for a bonus?

Russian aluminium manufacturer Tatprof has made international headlines for paying its female staff to take seflies flashing their bare legs, and then send the pictures to their (mostly) male managers.

According to The Moscow Times, the flash for cash campaign, officially titled “Femininity Marathon” pays female employees 100 rubles ($2.20) to encourage them to wear skirts and make-up. Sending the selfie is reportedly required as proof of compliance. 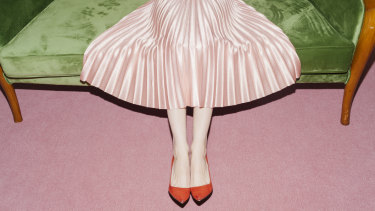 One Russian company is very keen to see feminine “essence” in the workplace.Credit:Stocksy

Anastasia Kirillova from the company's department of corporate culture and internal communications, explained to Russian state-run news agency Sputnik, reported by the BBC, that the selfie campaign was inspired by the company’s concern – and I use that term loosely – for its female employees’ femininity.

“Many women automatically put on trousers, so we hope that [the campaign] will increase our ladies’ awareness, allowing them to feel their femininity and charm when they make the choice of wearing a skirt or dress,” Kirillova said.

The fretting over the female staff’s femininity feelings came all the way from the top of the company. CEO Sergei Rachkov is reportedly very concerned about the consequences of mixing gender roles.

“He really wants to maintain the female essence in every female employee of the company,” Kirillova said. “So that young women do not have male haircuts, do not change into trousers, so that they engage themselves in handicraft, project all their warmth into raising children.”

Turning Tatprof’s female workforce into to eye candy will reportedly “brighten up” the workdays of the 70 per cent male workforce and “unite the team”.

But, alas, not everyone has been as supportive of Tatprof’s efforts to restore its female employee’s “female essence”.

Russian feminists have slammed Tatprof’s Feminine Marathon as “news from the Middle Ages”, pointing out that “We are not here to make mans [sic] days brighter”.

Despite the criticism, the aluminium company has dug in, citing proof that the campaign is a great success. Reportedly, 60 women have already sent selfies to their managers and the women “are smiling and even seem to be glowing”.

The campaign is easy to dismiss as ridiculously comical. It is, after all, laughable that the definition of female essence just happens to maintain male dominance and comply with cliched male sexual fantasies.

But while the Russian firm’s efforts to police women’s identity is ham-fisted, it’s not as if we in the West are completely above it. We’re just more sophisticated and subtle about keeping women within tightly scripted gender roles within work settings.

It was only three months ago that Virgin Atlantic relaxed its dress code for women, announcing that female flight attendants no longer have to wear make-up or skirts.

In the corporate world, the ghost of lady dressing still lingers. The dress code entitled “Women: Business Professional” on the website of Graduate Australia says: “Women should wear firm, professional-looking ballet flats or office heels, pencil skirts or slacks no shorter than the knee…”

The word "slacks" appears to be so hastily inserted that the sentence doesn’t even make sense. If the hem line of slacks is anywhere near the knee they would, by definition, be shorts.

Policing women to keep them “ladylike” and non-threatening to men in work environments goes way beyond dress codes. Behaviour that would be interpreted as assertive in men is judged as bossy in women.

Women are penalised for showing anger at work, and are regarded as emotional. Angry men, by comparison, are viewed as more competent. At the other end of the emotional spectrum, women who joke at work tend to be regarded as disruptive, whereas men’s jokes are judged to reflect positively on their abilities.

While more subtle, these kinds of evaluations are built on deeply-ingrained ideas about what men and women are permitted to do. Men, on the whole, are granted more leeway on their dress, behaviour and emotional displays, while women must be restricted.

Perhaps the larger lesson of the Russian firm’s policy is that “natural” gender roles are so “unnatural” that they need to be consciously imposed. After all, if femininity really is part of women’s “essence”, then why would a company need to pay women in order for them to display it?

Kasey Edwards is the author of The Chess Raven Chronicles under the pen name Violet Grace.