PARIS — Roger Federer has not dropped a set at the French Open and eased into the quarterfinals with a 6-2, 6-3, 6-3 win against the unseeded Argentine Leonardo Mayer on Sunday.

With temperatures reaching 88 Fahrenheit (31 Celsius) on a sun-soaked center court, the third-seeded Federer was rarely troubled in beating Mayer for the fourth time in four meetings.

Federer has not played at Roland Garros since 2015, deciding to skip the clay season for health reasons until returning to the surface this year.

In his last French Open, four years ago, Federer lost in the quarterfinals to his Swiss countryman Stan Wawrinka in straight sets.

He could get a chance to make amends. Federer next faces either Wawrinka or the rising star Stefanos Tsitsipas, who beat Federer in the fourth round at this year’s Australian Open.

Federer is chasing a record-extending 21st Grand Slam title. He won his only French Open in 2009.

The women’s quarterfinals got some fresh faces Sunday.

Petra Martic has followed up her win over second-seeded Karolina Pliskova by rallying past Kaia Kanepi, 5-7, 6-2, 6-4, to reach her first Grand Slam quarterfinal. 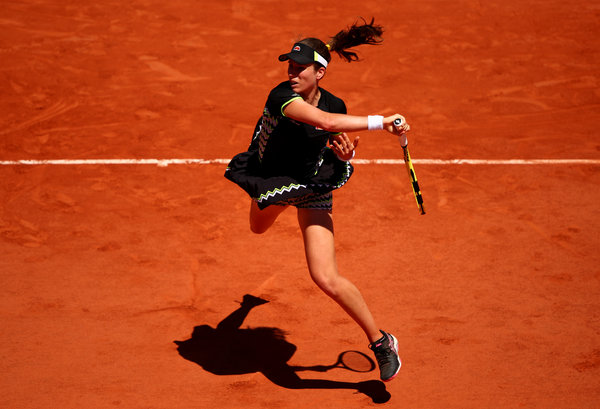 The 31st-seeded Martic had entered with an 0-4 record in the fourth round at majors — first reaching the last 16 at Roland Garros seven years ago.

With both players trading moon balls late in the tense third set, Martic ran down a drop shot and responded with a forehand winner up the line to break for a 5-4 lead, then converted her first match point in the next game.

Martic next plays 19-year-old Marketa Vondrousova, who has reached her first Grand Slam quarterfinal without dropping a set.

The only two games that Vondrousova lost came immediately after she took a medical timeout to receive treatment for an apparent cut on a finger of her left hand — her playing hand — while leading by 3-0 in the first. She appeared to pick up the cut when she slipped and fell to the clay in the previous game.

Vondrousova improved to 25-5 since exiting the Australian Open in the second round — a stretch that includes finals in Budapest and Istanbul.

Although Konta had reached two Grand Slam semifinals, at the Australian Open in 2016 and at Wimbledon in 2017, she had never been past the first round at Roland Garros in four previous appearances.

Konta’s quarterfinal opponent will be either the 2016 champion, Garbiñe Muguruza, or the 2017 United States Open champion, Sloane Stephens.