In the second day of the round of 16, hardcourt specialists will be on display, trying to adjust to the slower, heavier conditions of the red clay in the autumn in Paris. This can lead to interesting dynamics, with players who would normally have a clear understanding of each other’s games suddenly facing curveballs in the form of both the surface and their opponents.

Here are some matches to keep an eye on.

Because of the number of matches cycling through courts, the times for individual matchups are at best a guess and are certain to fluctuate based on the times at which earlier play is completed. All times are Eastern.

Djokovic, the top seed at Roland Garros, is a 17-time Grand Slam champion, and the French Open is his least favorite of the four major championships. Djokovic won the French Open in 2016, but in the three years since he has reached the quarterfinals twice and the semifinals once.

For a player who strongly prefers hardcourts, Djokovic skated easily through the first week, losing only 15 games on his way to the round of 16. However, that stretch was against relatively unproven opponents, including a pair of qualifiers. Now he’ll face Khachanov, the 15th seed, and be truly tested for the first time.

Khachanov, a powerful predominantly baseline player, has been consistent in making deep runs at the French Open since his first appearance in the main draw in 2017. His first two years, he lost in the round of 16, and he last year took it one step further, reaching his first major quarterfinal. Djokovic holds a 4-1 record in their previous matchups, but they have only met on faster surfaces. Khachanov’s only victory came in the final of the 2018 Masters tournament in Paris.

With Djokovic’s defensive style favored on the clay, it seems that he will be victorious in Monday’s match, especially considering Khachanov’s early exits from the Italian and German Opens in the run-up to Roland Garros. 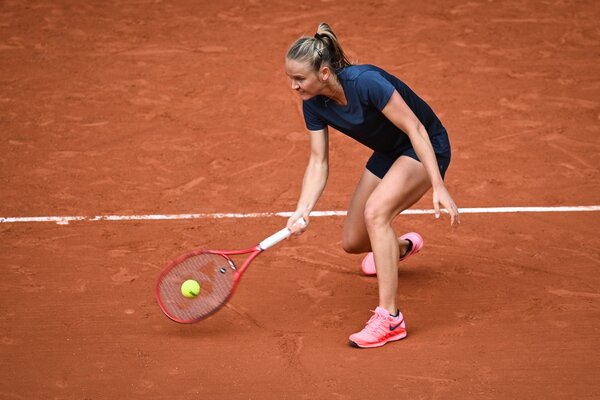 Kenin, the fourth seed and sixth-ranked player on the WTA Tour, won the 2020 Australian Open and has since faced pointed questions of whether she’s capable of repeating that feat. After a loss to Elise Mertens in the round of 16 at the U.S. Open, plenty of pundits suggested that Kenin might have been a flash in the pan. Those thoughts can be easily dismissed when considering that Kenin is the only player on the WTA Tour to have made it to at least the round of 16 in each major tournament this year.

In her third-round match against Irina Bara, Kenin lost the first two games before winning 12 straight with an effective combination of powerful baseline strokes and well-disguised backhand drop shots to finish the match.

On the other side, Ferro is a new face in the second week of a major tournament. Ranked 49th in the world, she won the Palermo Invitational in the lead-up to the French Open, and upset the 14th-seeded Elena Rybakina in the second round. Ferro’s movement is the strongest part of her game. She uses it to dig into defensive positions and to attack the net, a relatively unusual strategy on clay courts.

Ferro’s style of play may be enough to unsettle Kenin, whose usual weapons seem to fit the description of Ferro’s ideal opposition. While another upset would be a tall order for Ferro, it’s not entirely out of the question.

Tsitsipas, the fifth seed, has had a relatively successful clay-court season. On the day the French Open began, Tsitsipas was playing in the final of the German Open against Andrey Rublev. There were some concerns the quick turnaround would contribute to the exhaustion that many people feel during the five-set format of the Grand Slam tournaments. After a marathon, five-set match against Jaume Munar in the first round, Tsitsipas stayed fresh, moving quickly through his next two rounds while dropping only 11 games.

Dmitrov, a mainstay of the ATP Tour, has made the semifinals at the other three major tournaments, but this is his first time in the round of 16 at the French Open. Of his eight titles, only one has come on clay, in Bucharest in 2014.

Both Dimitrov and Tsitsipas are strong baseline players with dynamic one-handed backhands, and although they have never met on tour, their styles of play are familiar, and it is easy to imagine a battle predicated entirely on who can best execute their plan better.

Jabeur, the 30th seed, made history in January at the Australian Open by becoming the first Arab woman to reach a quarterfinal at a Grand Slam tournament. Now, in her second round of 16 at a major, she seems exceptionally comfortable on the big stages. After upsetting Aryna Sabalenka, the eighth seed, in the third round, Jabeur should feel confident in her ability to outplay big hitters.

Collins, ranked 57th in women’s singles, upset the 11th seed, Garbiñe Muguruza, in an intense three-set match. The two baseliners were nearly matched in quality, with Collins winning only two more points. Collins reached the semifinals of the 2019 Australian Open, but since then has struggled to replicate her success, not making it past the third round of a major until this tournament.

Jabeur and Collins prefer very different styles of play, with Collins emulating the baseliners that tend to dominate the WTA Tour. With Jabeur’s recent victories against such players, it seems unlikely that Collins will be able to make it farther in the tournament.