Luis Grijalva, who qualified to race in the Olympics for his native Guatemala, may not be able to return to the United States if he leaves. 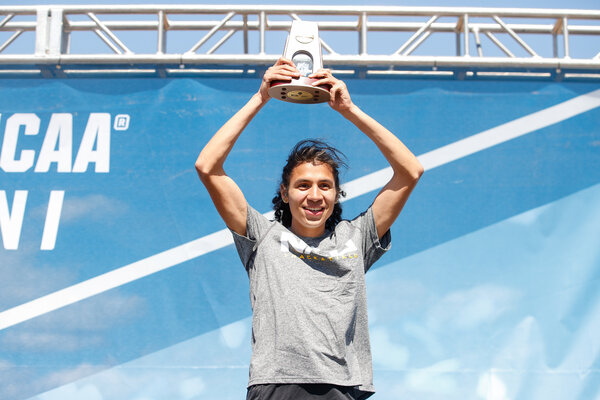 When Luis Grijalva crossed the finish line second in the 5,000-meter race at the N.C.A.A. track and field championship meet last month, he had plenty to celebrate: a new personal best time, a national record in his native Guatemala and a ticket to the Olympic Games.

It should have been a joyous occasion. But the 13 minute, 13.14 second effort also created a crisis for Grijalva, who has spent the last several weeks petitioning the United States government to allow him on a plane to Tokyo.

Grijalva is a beneficiary of Deferred Action for Childhood Arrivals, a program introduced in 2012 by the Obama administration that protects about 650,000 undocumented immigrants who were brought to the country as young children from deportation. With few exceptions, DACA recipients who leave the country are not permitted to return. Like other unauthorized immigrants, they face a decade-long bar from re-entry after living in the country illegally for many years.

“It’s been frustrating,” said Grijalva, whose parents moved with him and his two brothers from Guatemala City to New York when he was 1. “It makes me wonder about the opportunities I’ve lost, being born in a different country.”

Grijalva and his lawyer have been petitioning U.S. Citizenship and Immigration Services, the agency that controls immigration, to let him leave the country briefly to compete for Guatemala in Tokyo. The agency can grant DACA recipients so-called advance parole, or permission to travel, if they provide a good reason related to education, employment or a humanitarian cause.

But Grijalva has not yet received an answer, and the preliminary 5,000-meter race is on Aug. 3. He hopes to fly to Tokyo this week to give himself time to adjust to the time change. On Monday morning, Grijalva, a student at Northern Arizona University in Flagstaff, was visiting the government’s immigration office in Phoenix, hoping to plead his case one last time.

“I’m pretty anxious right now,” he said. “To have an opportunity like this in Tokyo to represent Guatemala at the Olympic Games would mean the world to me.”

The immigration agency declined to comment. News of Grijalva’s situation was reported earlier by the running site LetsRun.com.

Grijalva’s family, he said, was struggling to make ends meet in Guatemala, and came to the U.S. searching for a better life. When he was 3 years old, his family moved to Fairfield, a town in California’s Central Valley, where his father washed cars and worked at a nearby factory making cabinets. His father still lives there, while his mother and brothers have returned to Guatemala.