Since Monday, when baseball began enforcing stricter guidelines on ball-doctoring, pitchers on their way back to the dugout have occasionally been intercepted by umpires. As part of M.L.B.’s crackdown on sticky stuff on the balls pitchers throw, they have been asked to submit for inspection their hats, gloves, fingers and, if requested, more. (At least one has dropped his pants in frustration.) If any illegal substances are found, the new policy calls for an immediate ejection and 10-game suspension.

Of course, any gripping agents beyond rosin have long been against baseball’s rules. But M.L.B. had largely turned a blind eye to the issue, allowing concoctions made of things like pine tar or rosin mixed with sunscreen that, pitchers said, made it easier for them to better grasp a ball that has been particularly inconsistent in recent seasons. In recent seasons, though, that practice had morphed into a performance enhancer, according to M.L.B., thanks to super pastes or other substances being used to not only improve the grip but increase the spin, and thus the movement, of pitches.

“We were so stupid as hitters, saying: ‘Oh, yeah, it’s for control. We just don’t want them to hit us,’” Kris Bryant, a star for the Chicago Cubs, told reporters this week. “That was such a cop-out.”

Knowing how much of pitchers’ effectiveness to attribute to gummier grips is impossible, but an extended period of offensive impotency had the league and its hitters looking for solutions. Entering Friday, the overall batting average in baseball (.238) was the second lowest in history, and the strikeout rate (8.93 per team per game) the highest.

So after warnings about prohibited substances over the past year and a half didn’t change pitchers’ behaviors, and in hopes of leveling the playing field, M.L.B. has empowered its T.S.A. agents on the field — umpires — to step up the enforcement of the existing rules and randomly inspect all pitchers in each game. And just as they could before — although it rarely happened — opposing managers can request that umpires check a pitcher if something seems suspicious.

The blunt-force deterrent seems to be working: In the last week, spin rates are down and offense is up.

“The data seems to suggest that we’re moving the game in the right direction, that we found a problem that needed to be addressed and it’s being addressed,” M.L.B. Commissioner Rob Manfred told The New York Times this week.

But even as many pitchers have publicly rolled their eyes at the inspections, and most of the checks have gone off without a hitch, there have been several tense — or surreal moments — on the field. One star pitcher angrily stared down an opposing manager for requesting an additional check that reeked of gamesmanship. A reliever ripped off his belt and dropped his pants as umpires approached him. And in a moment of comic relief, Joe Musgrove of the San Diego Padres lost his grip on a bat and Trevor Bauer of the Los Angeles Dodgers offered him some rosin to shore up his grip.

For fans of entertainment, it was great theater. But to some players, it was embarrassing not only for them but the sport as a whole.

“If I’m a young kid at the game and I’m asking my dad” ‘Well, hey, what’s going on? Why are they getting checked?’” Yankees reliever Zack Britton told reporters. “What he’s going to say? ‘Well, they think everyone’s cheating.’ Is that what we want the game to be about, like we’re assuming you’re cheating? I just think it’s a bad look.” 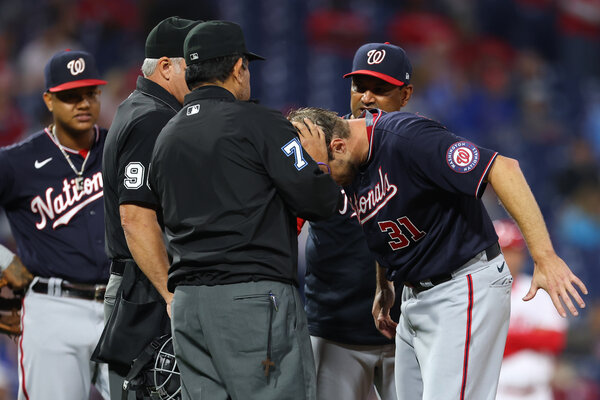 In Tuesday’s game against the Philadelphia Phillies, Max Scherzer, the ace of the Washington Nationals, a three-time Cy Young Award winner and a top players’ union representative, was deemed clean after being checked by the umpires after the first and third innings.

But during the bottom of the fourth inning, with a runner on base, the umpires walked toward the mound again at the request of Phillies Manager Joe Girardi. Standing in front of the mound, a chafed Scherzer flung his hat and glove to the ground, undid his belt and threw his hands up in frustration ahead of a third pat-down.

Girardi insisted he had never seen Scherzer take off his hat and touch his head so much, which had prompted his request. According to M.L.B.’s policy, a manager can be disciplined for making a request in bad faith, such as to disrupt a pitcher in a critical moment of the game.

Scherzer later explained that he normally licks his fingers during games and was sick of tasting rosin, the only substance pitchers are allowed to use. So he reached for the only moisture he could find on a not-so-warm night — the sweat under his hat — to mix with the rosin to improve his grip on the ball. He said gripping the ball had been a challenge, and noted that he had thrown a pitch near a batter’s head in the at-bat before the request for the third check.

When Scherzer left the game an inning later, he stared into the Phillies dugout. Girardi emerged, shouted and motioned toward the Nationals to come at him — and was immediately ejected. From his dugout, Scherzer held up his glove and hat while his teammates and coaches taunted Girardi.

“I’d have to be an absolute fool to use something tonight when everybody’s antenna is up,” Scherzer said.

In a radio interview the morning after the game, Nationals General Manager Mike Rizzo called Girardi “a con artist.” Rizzo, known for his fiery personality, later told reporters that he respected Girardi and the Phillies, and was simply defending his player.

“I didn’t mean to offend anyone,” Girardi added. “I’ve just got to do what’s right for our club.”

After Scherzer’s public examination, Romo, a reliever for the Oakland Athletics, took things a step further that night in Texas. As an umpire approached Romo after he finished an inning against the Rangers, the pitcher tossed down his hat and glove in the umpire’s direction, yanked off his belt and pulled down his pants.

“He’s a playful guy,” Athletics Manager Bob Melvin told reporters of Romo’s performance. “I don’t think he meant anything by it.”

There has been at least one inspection-related ejection so far: A discolored hat. When Castillo, a reliever for the Tampa Bay Rays, entered Wednesday’s game against the Boston Red Sox in the ninth inning, the umpires surveyed Castillo’s gear and asked him to switch to a different cap.

After the game, Rays Manager Kevin Cash and Red Sox Manager Alex Cora said it was simply because the hat was discolored rather than sticky. Still, Cora was confused why a hat could be questionable enough to be changed without the pitcher’s being ejected. Regardless, Cash had to bring a new hat to Castillo on the mound.

“The only thing I really don’t like is it makes every pitcher that comes onto the mound kind of look like a guilty culprit until proven innocent,” Treinen, a reliever for the Los Angeles Dodgers, told reporters this week.

Treinen wondered if the entire effort was a facade or a sincere crackdown, suggested that umpires inspect pitchers in the dugout instead of in front of everyone, and questioned if hitters were eyed with the same rigor on the rules applying to them. “Nobody checks every single bat or every pine tar placement on the bat,” Treinen said.

Star pitchers like the Yankees’ Gerrit Cole and the Nationals’ Scherzer have exasperatingly called for M.L.B. to re-examine the policy by talking to players, or have argued that there are better ways to stamp out foreign substances. But Kelly, a reliever for the Dodgers, was among the pitchers to applaud the new practice.

When umpires stopped him in Tuesday’s game against the San Diego Padres, the reliever not only handed over his hat and glove but his goggles, too.

“They didn’t want to check them, but I said, ‘You should check these anyway, because they’re sick,’” Kelly recounted. “And they laughed. That’s not in the rule book, but I just wanted to make sure they check them so they could see what I was wearing.”

Imagine being an umpire and having to run your fingers through someone’s moist hat, head, hands or glove. Snell, the 2018 American League Cy Young Award winner, was checked twice on Tuesday and said he had no problem with it. He was, after all, on the receiving end.

The checks were not a big deal for two players in the middle of dream seasons.

Ohtani, the Los Angeles Angels’ two-way star, laughed and smiled as umpires checked his hat, glove and belt when he walked off the mound after the second inning on Wednesday.

DeGrom, the ace of the Mets who has a 0.50 E.R.A. through 12 starts, was the first pitcher checked during the new enhanced enforcement and was entirely unfazed during yet another dominant start.

“I handed them that stuff and went along my way,” he said.