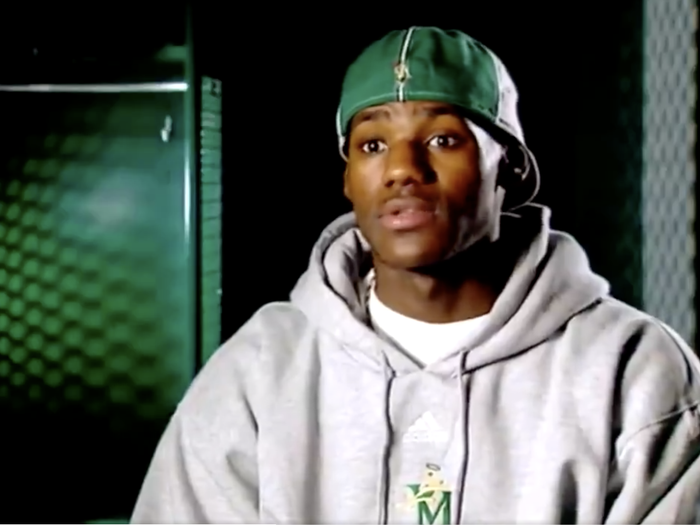 LeBron James' career is something of a miracle.

Before he ever played in an NBA game, people were already comparing him to the likes of Michael Jordan and Kobe Bryant. Such lofty expectations might have been enough to thwart the development of a lesser player, but James has surpassed what anyone could have imagined his career to have been.

Looking back today, it's easier to imagine James noting the comparisons between himself and fellow NBA greats. Still, an interview from 2002 that resurfaced recently shows that James' faith in himself and his ability were a part of his mindset since well before he was an NBA superstar.

In the interview, James was asked what it felt like to be compared to some of the greatest players in NBA history.

"It makes me work even harder to get to the level that Magic, Michael, Bird, Julius, and now that Kobe and Tracy are in the league," James said. "It's great to be compared to some of the greats. When I look at that, I want to be like Michael Jordan and Magic Johnson, not on the court, but off the court."

James said that while he recognized the expectations put upon him, he was mostly concerned with his own growth.

"I think I'm setting the bar for myself. I'm just going to keep working hard and keep doing what I've been doing for the last four years to get myself better. And the bar is going to be even higher if I keep working.

"I don't think I'm hard on myself. If you're hard on yourself, it gets to a point where it might be too hard, and it might be too much pressure. If you just keep doing what you're doing, don't change … You've got to come back to yourself and realize who you are. I'm LeBron James, and that's not going to change."

James retweeted the video as it was making the rounds on social media, taking time once again to praise the basketball greats that came before him.

Now entering his 18th season in the NBA, James has accomplished all there is to accomplish in the sport. He's a four-time champion, MVP, and Finals MVP, and has now won titles with three franchises after leading the Lakers to lift the trophy in 2020.

And after signing another extension that will keep him in Los Angeles through 2023, it's clear he doesn't plan on slowing down any time soon.