Groves, who won silver in the 200 metres butterfly and 4×100 medley at the 2016 Rio Games, announced her decision on Instagram before following up with a furious tirade on Twitter on Thursday. 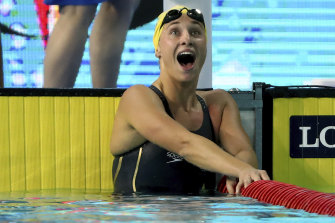 Madeline Groves, pictured at the Commonwealth Games on the Gold Coast in 2018.Credit:AP

“Let this be a lesson to all misogynistic perverts in sport and their boot lickers – You can no longer exploit young women and girls, body shame or medically gaslight them and then expect them to represent you so you can earn your annual bonus. Time’s UP,” she tweeted.

In December, Groves wrote on social media that she had made a complaint a few years ago about a man in swimming who stared at her in her swimsuit and made her feel uncomfortable. Groves alleged the perpetrator had been promoted in their area of employment.

She also wrote that a coach had made a “creepy comment” to her and apologised 15 minutes later, “possibly because the team psych told him to”.

Governing body Swimming Australia said they had reached out to Groves following her comments in December.

“Swimming Australia reached out to Maddie in December 2020 to enquire about a tweet sent by her that referenced potential abuse by someone connected with swimming,” SA said in a statement.

“Maddie declined to provide further information nor do we have any previous complaints on record from Maddie.

“We consider the welfare, safety and wellbeing of children and young people as paramount, and we have a duty to make inquiries to uphold the standards of our sport.”