Brad Simpson, who has been the boys’ basketball coach at Wakefield Memorial High School in a Boston suburb for decades, first met Nets guard Bruce Brown at an informal summer workout before Brown entered eighth grade.

“He looks awful, so spindly. His legs are like pipe cleaners,” Simpson recalled. But then Brown started shooting baskets to warm up. “The third time through, he throws it down like a monster jam. I almost fell out of the bleachers.”

Selected by the Detroit Pistons in the second round, with the 42nd overall pick, of the 2018 N.B.A. draft, Brown, who grew up in Dorchester, hasn’t forgotten where he came from. The Nets are facing the Boston Celtics in the first round of the playoffs, and the teams will play at TD Garden on Friday in Game 3. The Nets lead the best-of-seven series, 2-0. But this won’t be the first trip back home for Brown, 24. 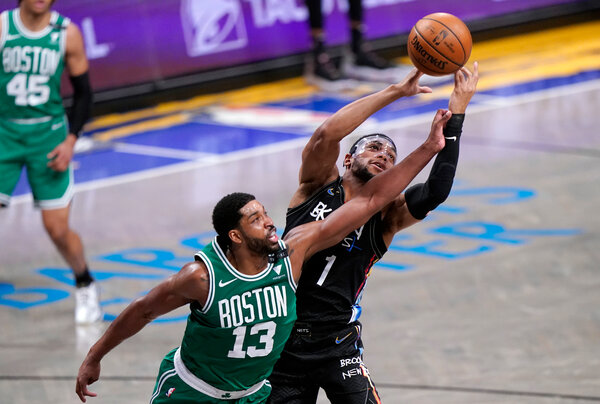 In his two seasons with the Pistons, Brown played in Boston four times, including once in late December 2019. The night before that game, he drove north of Boston to Wakefield Memorial High, where his basketball career first began to take off.

On that night, eight years after meeting Simpson, Brown was returning to take 10 Wakefield students to the Nike superstore on Boston’s posh Newbury Street. He gave them $200 gift cards and told them to get whatever they wanted. Like Brown before them, these students had come to the affluent suburb of Wakefield from working-class Boston neighborhoods like Dorchester, Roxbury or Mattapan, as part of the city’s Metropolitan Council for Educational Opportunity program, a voluntary school desegregation effort started in the 1960s.

A bus picked them up between 5:45 and 6:30 every morning and drove them 21 miles north to Wakefield, a town with a median household income of $100,278, according to the U.S. Census Bureau, double the $47,200 median in Dorchester, according to the Boston Planning and Development Agency.

Brown played for Wakefield during his freshman and sophomore years before he was recruited by Vermont Academy, a prestigious prep school in Saxtons River, Vt. Karen Henry, his guidance counselor there, called Brown the night before the Pistons played at TD Garden in December 2019. She asked if she should bring him anything — perhaps a school hoodie or some photos.

No, but he did need something else: maple syrup.

So Henry smuggled bottles of Vermont maple syrup tapped in the school’s sugar factory into the arena under her winter coat. She described Brown as a “once-in-a-lifetime kind of kid” with a “special quality to him.”

“He had a drive and a motivation like I haven’t seen before,” she said. “He had a goal, and there was nothing getting in the way of that goal.”

That one-of-a-kind kid from Dorchester could now be a thorn in Boston’s side. While the Celtics had their worst regular-season record in six years (36-36), the Nets have been the talk of the league. Based in New Jersey until 2012 and usually lurking in the shadow of the Knicks, the Nets have assembled a Big Three for the ages in Kevin Durant, Kyrie Irving and James Harden. They’re the No. 2 seed in the Eastern Conference and heavily favored to make it to the N.B.A. finals.

Championship teams, however, need more than big-name stars. Every title-winner has its glue guys, the players whose contributions may not be reflected in the box score. Brown averaged 8.8 points, 5.4 rebounds and 1.6 assists per game in a little more than 22 minutes a game during the regular season. He started 37 games because of injuries to the usual starters.

Nets Coach Steve Nash told reporters earlier this month that Brown is “a solution for us. He’s a Swiss Army knife, so to speak. He can guard multiple positions. He does the dirty work.”

Brown, a 6-foot-4, 202-pound guard, collided with his 220-pound teammate Harden in practice a few weeks ago and has been wearing a face mask since. The week after his injury, Brown put up three consecutive double-doubles. The local “Talkin Nets” fan podcast started printing “Masked Bruce” on T-shirts.

On Tuesday night, in Game 2 against the Celtics, Brown’s eight rebounds were matched only by Durant among Nets players. In their quest for a championship, the Nets’ Big Three, who played only eight games together in the regular season, will score the buckets and hog the headlines. But Brown has his role, too.

By the time he turned 13, Brown had grown to be 6-foot-1 and 145 pounds. He started competing for the Boston Amateur Basketball Club, a youth travel team, under Leo Papile, a scout for the Los Angeles Clippers who once worked for the Celtics.

Brown’s mother, Roberta, saw his athletic ability and wanted him to have access to more educational resources at Wakefield. So Brown woke up at the crack of dawn to get on a bus to the suburbs. By his senior year, he was at Vermont Academy and Division I college scouts from all across the country were calling Simpson, Papile and Alex Popp, his coach at Vermont Academy, to inquire about him.

Brown would take a three-hour bus ride to Boston from Vermont on Thursday nights, take his high school classes remotely on Friday, and then fly to Indiana, Los Angeles or Philadelphia for games with the B.A.B.C. team.

Brown’s parents had divorced, and his mother had moved to Atlanta for a job with Delta Air Lines, and he was unable to stay with his father in the Boston area. Papile set him up in a small basement apartment below a popular New York Pizza store in a building he owned in Roxbury. Colloquially known as The Club among B.A.B.C. players, the building served as an office and a bed-and-breakfast, Papile said. “Bruce could run up the stairs and they would hook him up with pizza,” he said. “It was very family-oriented.”

With advice from Papile, Simpson and others, Brown chose to play college basketball in Florida for the University of Miami and spent two seasons under Coach Jim Larranaga, averaging 11.7 points, 6.2 rebounds and 3.5 assists in 52 games, 48 as a starter. He visited Wakefield in between his two seasons, and Simpson opened the school’s gym for him to practice — the same gym where he dazzled his peers, and his coaches, with dunks and with his tenacity.

“He’s that blue-collar, strait-laced player who’ll get the ball by any means necessary,” Papile said. “That role is invaluable on a superteam like the Nets.”

He joined the Nets in November as part of a three-team trade, two months before a trade added Harden to the starry duo of Irving and Durant. Brown has credited his gritty playing style to teary childhood afternoons hustling against his older brothers on a hoop outside their Dorchester home.

In March, during an appearance on the University of Miami’s basketball podcast “Behind the U,” Brown talked about playing against his brothers and was asked what he brings to the Nets.

Speaking of Durant, Harden and Irving, Brown said: “I know when those guys put up 30 or 40 points a night, my role out there is to play defense, bring energy, rebound the ball, and then make shots when I’m in.”

On Friday night, back in his hometown, that’s what the Nets will need him to do.