Gwangju, South Korea: Cate Campbell says she was inspired by ironman backstroker Mitchell Larkin as the sprint queen produced a sizzling anchor leg to drive Australia to world championships gold in the mixed medley relay, a new Olympic event in Tokyo next year. 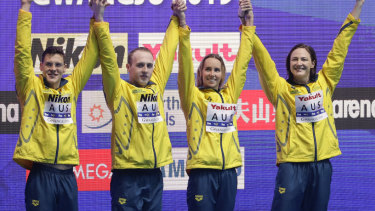 For Campbell, it was another superb relay swim and she will hope to carry that form into the individual women’s 100m freestyle final on Friday night.

Teams must deploy two male swimmers and two female swimmers across the four strokes to be swum in any particular order. It's a quality spectacle for fans, with huge swings during the race and often multiple lead changes.

Wilson swam the race of his life to keep the Australians in touch before McKeon rose off her sickbed to return to the pool with a typically gutsy swim in the fly leg. She was eventually gunned down by American superstar Caeleb Dressel but she did enough to put Campbell in touch at the final change.

"Obviously, I haven’t had a great start to the week with my health but just to get into a relay I think it’s a good way to get back into the racing pool," McKeon said.

"On the turn, I knew that the boys would be coming at me so I kind of just shut my eyes as soon as I turned because I didn’t want to see where they were and just swam as hard as I could home."

It was the third gold medal of the meet for Australia, while Ariarne Titmus added a silver earlier in the night in the 200m freestyle, won by Italy's defending world champion Federica Pellegrini.