It should have been as good as over: Bob Gibson on the mound in Game 7 of the World Series, facing the bottom of the Yankees’ order with a four-run lead in the ninth inning.

But Clete Boyer homered with one out, and Phil Linz homered with two out. Due up was Bobby Richardson, who somehow had seven hits off Gibson in the World Series. The dangerous Roger Maris would follow Richardson.

Gibson was pitching on two days’ rest and coming off a 10-inning complete game. Yet Johnny Keane, the manager of the St. Louis Cardinals, left his ace on the mound. The 1964 World Series would be Gibson’s to decide.

“I had a commitment to his heart,” Keane said later, a telling and touching comment about both Gibson — who died of pancreatic cancer on Friday, at age 84 — and his era. But while logic said Gibson was tired that day, his stuff did not show it.

Gibson’s final pitch was a fastball, just high enough that Richardson could not hit the line drive he wanted. He swung under the pitch and lifted a harmless fly to second base. The Yankees’ glory years were over, and Gibson was a champion.

“That fastball I popped up was just as good as it was at the start of the game,” Richardson said on Sunday from his home in Sumter, S.C. “I never thought for a moment that Johnny Keane would take him out.”

Gibson died on the final day of the season for the Cardinals, the only team he played for in his Hall of Fame career. They were eliminated from the playoffs with a shutout by the San Diego Padres, who used nine pitchers to do what Gibson often did by himself, especially in October.

Gibson made three trips to the postseason, all in the years when the regular-season champions advanced directly to the World Series. He made nine starts and threw 81 innings, going 7-2 with a 1.89 earned run average and is the only pitcher to win Game 7 of the World Series twice.

The second time was in 1967, at Fenway Park in Boston. The Red Sox used their Cy Young Award winner, Jim Lonborg, on short rest, and the Cardinals battered him. Gibson struck out 10, hit a homer and went the distance for his third win of the Series.

“You knew you had to stay close to beat him, and Lonborg just didn’t have his stuff,” Rico Petrocelli, Boston’s shortstop that day, said by phone on Sunday. “He was exhausted, and with Gibson, there was no change. It was like the first game, same thing — boom, breaking ball, boom, fastball in, right on the black on the outside corner. He had it all.”

Gibson saved his most dominant performance for the opener in 1968, when he set a World Series single-game strikeout record with 17 against Detroit. He won again in Game 4 and was pitching a shutout in Game 7 when center fielder Curt Flood misjudged a two-out fly ball by Jim Northrup in the seventh, turning it into a decisive two-run triple.

Though he pitched a complete game that day — of course — Gibson lost to Mickey Lolich, ending a season in which he was never pulled from a game in mid-inning. Gibson had a 1.12 earned run average, a modern record, and won the National League Cy Young and Most Valuable Player Awards.

With offense waning across the game, Major League Baseball lowered the mound in 1969 from 15 to 10 inches, hoping to give hitters a better chance. Gibson responded with a 20-win season and even more strikeouts than he had had the year before.

“It didn’t affect me much, because I was probably more of a three-quarter pitcher anyway,” Gibson said in a 2015 interview, referring to his arm angle. “I think it would affect the guys who threw overhand, the guys who threw a lot of curveballs, because that curveball started being up in the strike zone. But my slider, I just had to adjust that just a little bit and I was OK.”

Gibson’s slider was a devastating weapon but a physical hazard; try turning a doorknob as hard as you can, over and over. His success with the pitch inspired a young teammate, Steve Carlton, to use it as well — but Carlton modified his release and used innovative training techniques, all to minimize the pain he saw Gibson endure.

“Gibby always used to say: If you throw, it’s going to hurt,” Carlton said in a 2015 interview. “There’s truth in that.” 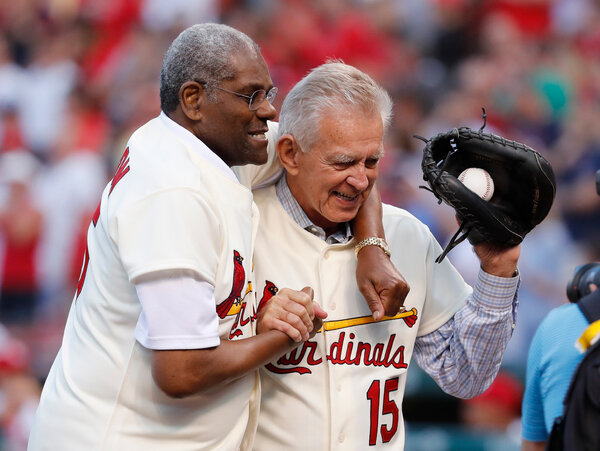 Carlton pitched longer than Gibson and also wound up in the Hall of Fame. At a reception before his induction ceremony, in 1994, Tim McCarver saluted Carlton in a speech, with Gibson in the crowd. McCarver, who caught both pitchers in their primes, told the crowd that if Carl Hubbell had the best screwball ever, Nolan Ryan the best fastball and Sandy Koufax the best curveball, then surely Carlton had the best slider.

“Everybody applauded, it was very emotional, very fitting,” McCarver said a few years ago. “And we’re hugging, and I look over Steve’s shoulder and I see this figure swinging through the crowd — a ‘he had to get to me’ type of deal. Well, that figure was Gibson. He gets about six inches from my face and says: ‘The best left-handed slider in the history of the game!’ He kind of skulked away and laughed. He had to have the last word.”

Gibson’s intimidating persona has only grown lately, as M.L.B. tries to eliminate brushback pitches with fines and suspensions to promote player safety. But Gibson never actually led the league in hit batsmen, and when he did hit a batter, it was usually a right-hander moving up on the plate to reach the slider.

Their fault, Gibson would say.

“When you go guessing for a ball outside and you go out there to get it — especially with that slider out there a lot to right-handers — they would start out there to get that ball,” Gibson said in 2015. “Well, if I threw a fastball inside, especially a two-seamer, it’s going to hit them. And I wouldn’t acknowledge, ‘Oh, I’m sorry.’ I would never acknowledge that. I just said, ‘Gimme another ball, let’s go,’ so they thought I was throwing at everybody. And that was OK.”

Deep into retirement, Gibson pitched in an old-timers’ game and gave up a home run. The next batter was Richardson, just as it had been at the end of the 1964 World Series. With nothing at stake but pride, Gibson decided to play to his persona.

“The guys on the bench said, ‘I wouldn’t go up there if I were you!’” Richardson said, laughing. “And I said, ‘Surely not.’ I’m 65 years old, no helmet. Well, I got up and the first pitch was right behind my head. I was glad to pop up later on and get out of there. But he was quite a competitor.”

Gibson was generous off the field, Richardson said; when they served together on the board of the Baseball Assistance Team, Gibson would sometimes cover an ailing player’s expenses by himself. He was intensely loyal to friends like McCarver and Joe Torre, and gentle with children.

After a banquet in the 1990s, Gibson engaged in a conversation with a 9-year-old Little Leaguer and shared his attitude on the mound.

“He asked me if I pitched, and we got to talking about how much he took it personally when the hitter stepped in the box against him, making him feel uncomfortable and attacking him, trying to embarrass the guy,” said the boy, Drew Storen, who grew up to pitch in the major leagues. “That’s something I always took to heart: you have to go out there and have that mound presence.”

No pitcher ever had a presence quite like Bob Gibson, the master of the big moment and a monument to prideful endurance.