Her death, announced by her sister Nancy Inglese on Facebook, came a week after Inglese sustained a traumatic brain injury in a fall. A family statement did not say where she died.

The Hartford Courant reported on Sunday that Inglese had undergone two surgeries at the North Shore University Hospital in Manhassett, N.Y. She was hired last month to be an assistant coach at nearby Hofstra University on Long Island. The newspaper said she had fallen down a stairwell before a summer workout by the Hofstra team.

Inglese won more than 400 games in her 27 years as a head coach. She coached at Boston College from 1993 to 2008, and in the Eagles’ seven N.C.A.A. tournament appearances under her, they reached the Sweet 16 three times.

Inglese led the Eagles to their lone Big East Tournament championship in 2004, when they became the only school to capture the title by winning games on four straight days.

Inglese went to Boston from Vermont, where she had led the Catamounts to consecutive undefeated regular seasons in 1992 (with a record of 29-0) and 1993 (28-0).

In 1993, Vermont was the only undefeated team entering the Division I N.C.A.A. tournament from the North Atlantic Conference, though it did not have a starting player 6 feet tall or over. 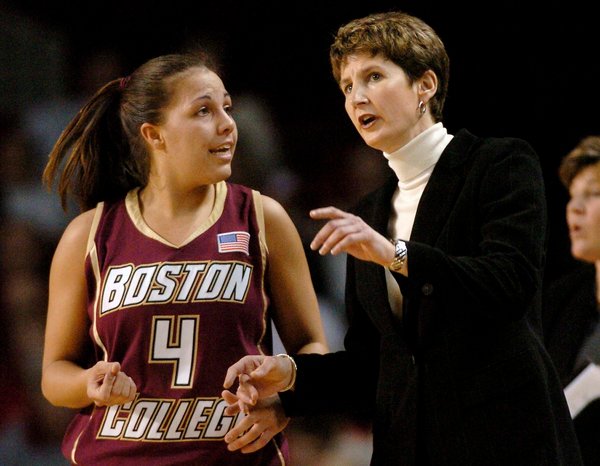 “Since we don’t have the size,” Inglese told the columnist Ira Berkow of The New York Times, “we have to play a tenacious defense, a swarming defense, all over the court.”

After her 15 years at Boston College, Inglese became head coach at the University of Rhode Island. In 2005 she was an assistant coach of the United States team in the World University Games, held in Izmir, Turkey.

Inglese was born on Dec. 16, 1958, in Wallingford, Conn., to Vincent and Nancy Inglese. Her father was the principal at Lyman Hall High School in Wallingford; her mother was an elementary school teacher, The Courant said.

Cathy Inglese helped Sheehan High School, Lyman Hall’s crosstown rival, win a basketball state title in 1976. She went on to play basketball at Southern Connecticut State University and was also a three-year letter winner on the university’s softball team. She graduated in 1980.

That year, she began her coaching career at Glastonbury High School in Connecticut. She went on to become assistant basketball coach and assistant athletic director at the University of New Hampshire for three years before accepting the head coaching post at Vermont in 1986. She earned a master’s degree in education from New Hampshire in 1987.

Before joining Hofstra, she had for two years been an associate coach at Fairleigh Dickinson University in New Jersey.

Inglese was awarded several coach of the year honors during her career and inducted into state and university halls of fame.

Complete information on her survivors was not immediately available.