Kyle Chalmers and Mitch Larkin smashed  personal bests and posted world-leading marks on day four of the national trials in Brisbane to put their global rivals on notice ahead of next month's FINA World Championships in Korea.

Chalmers doubled down on his impressive heat swim by dominating the final of the 100m freestyle. The Olympic champion turned in second behind Cameron McEvoy and motored home in 47.35s ahead of Clyde Lewis, who booked the other individual spot. McEvoy was third and Alex Graham fourth. 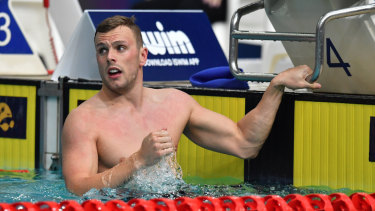 Pretty special: Kyle Chalmers checks out the clock after winning the 100m freestyle.Credit:AAP

His time eclipses that of Russian rival Vladislav Grinev, who recorded a 47.43s at his national championships in April. But Chalmers is the one with the big race chops, and his performance will have American gun Caeleb Dressel on edge.

Chalmers is swimming with immense confidence and in peak physical condition. It shows in his racing, and from the moment he touched with the pack at half-way, poolside announcer James Magnussen, the recently retired former world champion, declared it game over.

I think that was pretty special tonight, to be honest.

"My goal was just to do a PB. It's been a long time since I've done two PBs in a season. To do it back-to-back, it's good for the confidence," Chalmers said.

The goal now is to go faster in Korea and more importantly, win. Chalmers has emerged as a leader of the Dolphins and wants to claim a maiden world title to go with his Olympic gold.

"I think that was pretty special tonight, to be honest. Over the next couple of weeks, I really want to hone in on my skills. Tonight I felt a lot better but I want to win . . . I don't swim to make up the numbers.

"I want to give it my best every time I get in the pool. Hopefully in four weeks I can produce something faster than that." 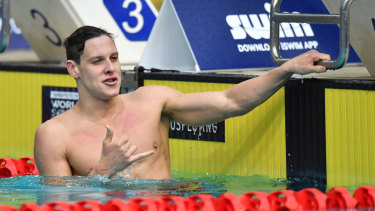 Having fun: Backstroke specialist Mitch Larkin after his win in the 200m individual medley. Credit:AAP

The rejuvenated Larkin was just as impressive in the 200m individual medley – an event that remains almost a part-time concern. The backstroke specialist has added it to his program in recent years, picking up where he left as a junior, and has taken his racing to new levels.

Larkin looked in brilliant form as he raced clear  to beat his own Commonwealth record and touch in 1:55.72, with that time now the pick of the pack ahead of Brit Duncan Scott. If he can repeat that at the world titles, he's a huge chance of topping the podium.

"I thought it might have been close [to the best time this year]. We saw Duncan Scott post a good time, he was number one. Warm-up felt great, it stung a bit more than I would have liked but that's the reason why," Larkin said.

Larkin has thrived under the coaching of Dean Boxall and wants to revisit the kind of form that had him on top of the world four years ago at the Kazan world titles.

"Looking back four years ago I was in a similar position. I said to Dean 'I want go get back there'. I don't care about pressure or expectation . . . I just want to swim fast and to the standard I'm capable of. I'm pretty happy with the week so far."

University of WA butterflyer Brianna Throssell won her 200m race and nailed the qualifying time, while Ariarne Titmus was safely through in the 800m, qualifying in 8:18.23s, just over a second outside of her national record.