Whether a potential time-keeping error cost her Giants a Super Netball victory in Perth or not, coach Julie Fitzgerald was more frustrated her team didn't put away West Coast Fever before that.

The Giants were on top of the Fever for virtually the entire game on Saturday evening at RAC Arena and still led by four goals with about three minutes remaining. 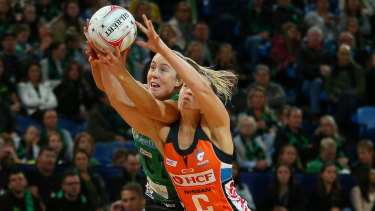 Controvery: Jessica Anstiss of the Fever battles for the ball with the Giants’ Jamie-Lee Price.Credit:AAP

However, they wouldn't score again – although it did appear Caitlin Bassett got her shot off in time which would have been the match winner.

It wasn't to be and the Giants had to accept a 62-62 draw which left them in fourth place with three wins, three losses and a draw from seven matches.

Fitzgerald was left agitated the Giants didn't fully take advantage of their control of the game earlier.

"That last quarter or the last three or four minutes cost us three points virtually, two points for the win and the bonus point, so I can't be too happy about it," she said.

"We don't know whether that was an error or not but the fact that we let them back into the game was the frustrating thing.

"We had ample opportunities to win that game and we didn't finish it off.

"Converting our possession game is something we really have to get a lot better at."

There were still a number of positives for Fitzgerald to take from the game.

Bassett scored 42 goals from 46 attempts while Jamie-Lee Price was especially strong through midcourt.

Kristiana Manu'a and Sam Poolman did what they could defensively to make it tough for Jhaniele Fowler, although the Jamaican goal shooter finished with 61 goals from 65 attempts.

"I do think we're getting better every week," Fitzgerald said.

"Our defensive effort, especially from our two defenders, was the best that we've seen this year, so that's a positive to take away from the game.

"I still think we make silly errors at crucial times and that we don't have the ability to build on leads.

"That's what we will be concentrating on." 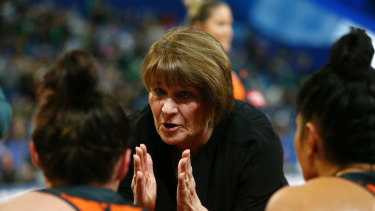 The Giants return to Sydney to take on the league-leading NSW Swifts next week, seeking revenge for a round one loss.

"Every game's a big one now, this competition is so close. I just feel every game you play now is almost like a grand final," Fitzgerald said.