LAS VEGAS — When the Croatian national team arrived for the N.B.A.’s Las Vegas summer league this month, the players knew they would not dominate squads with big-name prospects. They were just hoping to avoid getting mopped off the court.

“I was afraid we would get destroyed,” said Veljko Mrsic, the team’s coach.

But by the time Mrsic huddled with his team before a game against the Oklahoma City Thunder last week, Croatia had proven itself worthy of inclusion with a pair of close losses. Mrsic had a team that moved the ball on offense and played beefy defense. He could also sense that his players wanted to test themselves against some of the best young players in the world, even if basketball was just one part of this 6,000-mile journey to the center of the summer hoops universe.

The Las Vegas summer league is many things — casting call, reunion of sorts for the American professional basketball set, junket for the N.B.A. and its hangers-on. For Croatia’s national team it was like one of those loosely chaperoned summer tours for privileged American teenagers.

A country of about 4 million people, Croatia has seven players in the N.B.A., including Ivica Zubac, a center for the Los Angeles Clippers who was among the high-profile spectators for some of the team’s games. Its most famous basketball exports are Drazen Petrovic, who died in a car accident at 28 in 1993, and Toni Kukoc, who played for four N.B.A. teams over 13 seasons. None of the current N.B.A. players competed for Croatia at summer league, clearing the stage for lesser-known teammates in the national program.

For many of those who did play, summer league was a unique experience: first time outside Europe, first time going up against bona fide N.B.A. competition, first time playing in an arena that was as large as the Thomas and Mack Center. They went to Caesars Palace — and to an outlet mall.

“It’s going to be hard to go back to reality,” said Pavle Marcinkovic, a 30-year-old forward who was recently voted the most valuable player of Croatia’s top pro league. “Everything is so fast, and everything is happening. You go down to the lobby and see Karl-Anthony Towns — all these guys you see on TV.”

It was also the first trip to Las Vegas for Igor Kolaric, the team manager, though he felt uniquely equipped for all that the city could offer.

As far as the basketball went, the summer league odyssey was everything they could have hoped for. N.B.A. officials invited them to participate along with a national team from China, an opportunity for the players to gain invaluable experience ahead of Olympic qualifying next year. Stojko Vrankovic, the president of the Croatian basketball federation, sat at the end of the bench during games to evaluate their progress. Kolaric had been bracing himself for the worst.

“But even if they get their butts kicked,” he said, “it will only motivate them to work harder.” 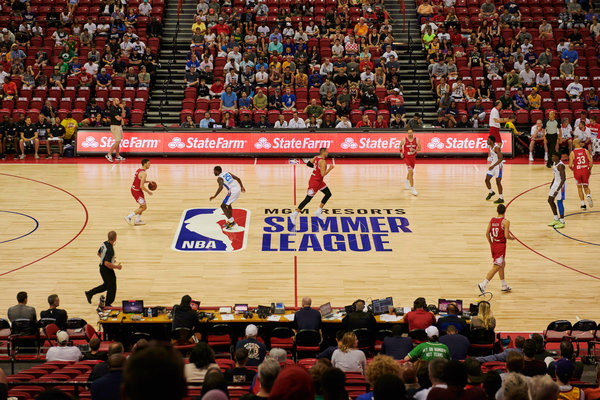 When Mrsic spoke, his players listened — carefully. He seemed to command authority without having to raise his voice. It was simply understood that he was in charge.

“Don’t give up any easy baskets,” he told his team in the locker room. “Hold our rhythm. If we play at their pace, we’ll be in trouble.”

Sure enough, Croatia got off to a dream start against Oklahoma City, creating a turnover on the opening possession. At the other end, Marin Maric, a former center at DePaul who most recently played for pro teams in Turkey and Belgium, tipped in his own miss for the game’s first points. The bench erupted.

The players had come from teams like Sixt Primorska (Slovenia), Stelmet Zielona Gora (Poland) and Duke (Atlantic Coast Conference), where Antonio Vrankovic, a 22-year-old center and the son of the federation president, had spent the past four seasons coming off the bench. He said it was fascinating to observe some of his teammates’ impressions of Las Vegas.

“It’s funny to think that this is their sense of America,” he said.

Vrankovic was hoping to use summer league to showcase his skills for scouts after having played sparingly in college.

“I’m struggling to be patient,” he said. “I’m young, so I want everything to happen now. But it’s a work in progress.”

The team was sticking to a budget. Instead of renting out a conference room at the hotel for pregame film sessions, the players crammed inside Mrsic’s room and crowded around a laptop computer. They also ate every meal for two weeks at the Palms Casino Resort’s all-you-can-eat buffet. Not that anyone was complaining.

Kolaric laundered uniforms, handled ticket requests for friends and extended family, moonlighted as the team’s official photographer and even taught the television broadcasters how to pronounce the players’ names. He drew the line at doing social media.

Kolaric joined the federation in 2016, working year-round as a jack-of-all-trades. He keeps in close contact with the Croatian players who are in the N.B.A. — Dario Saric of the Phoenix Suns is one of his best friends, he said — and he will answer their phone calls at 2 a.m. if they need help or advice.

Kolaric had slept about three hours ahead of Croatia’s game against Oklahoma City. He had been on his computer, filling out paperwork for some of the team’s additional travel this summer. He was still to check out the Gold and Silver Pawn Shop, home of the “Pawn Stars” television program.

“My parents would kill me if I didn’t go to ‘Pawn Stars,’” Kolaric said.

The players were on a curfew: midnight before game days and 2 a.m. before off days. In the small hours after a tip-off party at one of the luxury hotels on the Strip, Kolaric went around to knock on the players’ doors just to make sure everyone was in decent shape. “It was an open bar,” he said.

It was clear, though, that their focus was sharp. Against Oklahoma City, Maric was revealing himself to be an absolute load on the interior, and Croatia led by as many as 11 points in the third quarter. But then, in the fourth, the Thunder rallied by taking advantage of some sloppy passing and went on to win, 84-76.

In the locker room afterward, Zeljko Sakic, the oldest member of the team, sat in silence. Marjan Cakarun, a center who had scored 13 points in 18 minutes off the bench, had his left hand wrapped in an ice pack. Zubac stood in the doorway as Mrsic went around the room, offering high-fives. Amid the gloom, the coach was encouraged.

“We were so close, but our bad habits came out,” he said in an interview.

As Maric put it, “We’re showing we can play against these teams.”

On the team bus back to the hotel, Sakic showed off a picture that he and a couple of his teammates had gotten after the game with Vince Carter, the veteran swingman who was working with the broadcast crew. During a trip full of them, it was another moment worth remembering.