Civil rights proponents say one of the Morrison government’s key reasons for deporting Novak Djokovic is weak and could create a precedent to block travellers with undesirable political views who pose no real risk to the community.

Lawyers for Immigration Minister Alex Hawke relied on comments made by the tennis world No.1 in April 2020, before COVID-19 vaccines were created, in which he said he was “opposed to vaccination” but was “no expert”, had an “open mind” and wanted “an option to choose what’s best for my body”. 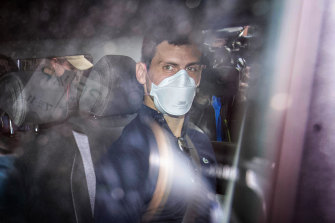 The government’s barrister, Stephen Lloyd, SC, argued on Sunday that Djokovic’s views were “widely understood” and he had “become an icon for the anti-vaccination groups”. However, he said it was not only what Djokovic had stated in the past that had an impact, but also how people perceived him now and how that might encourage them to reject vaccination.

Pauline Wright, president of the NSW Council for Civil Liberties, said it was reasonable for the government to suggest a famous person such as Djokovic who is unvaccinated may influence some people to refuse inoculation.

But it was a “big leap” to argue his previous comments on vaccination were serious enough to deem his presence in Australia a public health risk.

“Do the comments in 2020 disentitle him from playing a tennis game in Australia in 2022?” she said. “Does that really pose such a threat to public health in a situation where we’ve got 95 per cent of the adult population vaccinated?

‘The reliance on how someone might be perceived sets an impossible standard for that person to meet.’

“People are free to be sceptical of vaccination … As long as they can prove they are COVID-free, I don’t see why they should be excluded from public life.”

Michael Stanton, a barrister and the president of Liberty Victoria, said it was “particularly unfair” to focus on how others might perceive Djokovic’s views, rather than the seriousness of what he has actually said.

“It’s very different from [denying a visa] for someone who has expressly said something about inciting violence or encouraging unrest,” he said. “The reliance on how someone might be perceived sets an impossible standard for that person to meet.”

It was also ironic that the government’s attempt to remove Djokovic had given his views a week of international attention, he said. “They have magnified the anti-vax voice.” 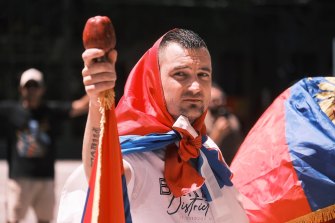 A supporter of Serbian tennis star Novak Djokovic outside the Federal Court on Sunday. Credit:Luis Ascui

Mr Stanton and Ms Wright said the case highlighted the danger of the Immigration Minister’s power to make what they described as arbitrary decisions. Under powers described by a former Labor immigration minister as “god-like”, the minister can cancel someone’s visa if they believe the person may – rather than will – risk public health or good order.

The debate came as fans of the 20-time grand slam winner protested outside Melbourne’s Federal Court buildings on Sunday. A contingent of about 20 gathered hoping to see their hero free from immigration detention and back on the court this week.

Australian Lawyers Alliance spokesman Greg Barns, SC, a barrister experienced in migration cases, said the government would be justified in blocking Djokovic if he was coming to Australia to spruik anti-vaccination views. “But he’s coming here to play tennis, and his views [on vaccination] are somewhat muddied,” he said.

“While we understand the importance of public health … it’s dangerous in a democracy to refuse entry to an individual who happens to have views contrary to government policy, particularly when the person is coming to Australia for a purpose that is unrelated to those views.”

Mr Barns said the case could, hypothetically, set a precedent for a musician to be blocked if they were well known for opposing the US-Australia alliance, on the basis the person might diminish public support for a pillar of Australian foreign policy and national security.

The government initially blocked Djokovic’s visa on the basis he did not have a valid medical exemption. But its second visa cancellation was underpinned by the new rationale that he was a risk to public health and good order based on his vaccine-scepticism.

Ms Wright said the new reasoning used by Mr Hawke “smacked of arbitrariness” and highlighted the undue extent of the minister’s discretionary powers.

The protest group gathered outside the Federal Court building on Sunday was listening to the live stream of the court proceedings on a loudspeaker. The stream was also being translated into Serbian by local news outlets, according to reports. 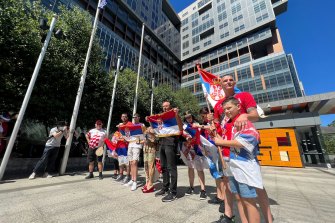 Djokovic supporters outside the Federal Court in Melbourne on Sunday.Credit:Ashleigh McMillan

Wearing a cap emblazoned with the Serbian coat of arms, Cveta Dimitrovici said she would boycott the Australian Open if Djokovic is deported. “I think this is very, very unfair, what they’ve done to him,” she said.

“I’m not going to go to the Australian Open if they’re going to reject him. I refuse to go.”

Tennis fan Nick, who did not give his surname, said the group was prepared to accept the court’s final decision – regardless of which way it fell.

“We’re here to stand up for a person who we believe stands up for us and for Serbia as a nation as well. From the turnout and pride here, you can see how much he matters [to us].

“If it all goes well today, elation will come. Right now we can only hope for the best, but we will respect the court process.”