MELBOURNE, Australia — Men’s tennis in 2021 can feel like a fairly homogeneous affair. Big people. Big forehands. Big serves. A lot of guys seemingly trying to hit the ball through the wall behind the back of the court, even on their one-handed backhands.

And then there is Daniil Medvedev, a lanky Russian who provides any number of answers to the question of how he’s different from other tennis players.

There’s the bizarre service motion, in which Medvedev bounces the ball twice, then tosses it in the air without first bringing it into contact with his racket (try it sometime — it’s super awkward). In an era of ripped physiques built for power, Medvedev takes the court with a wiry 6-foot-6 frame and a slouching posture that seems like the creation of a caricature artist. Often, he likes to turn a furious baseline rally on its head with a sudden, deadly drop shot from the back of the court. Or a moonball. Or a twisting, beguiling slice.

Medvedev has honed a quirky and creative mix of spins and surprise. He seems to care little about trying to dictate the terms of a match, and more about deducing which weapons the match requires and forever looking out for another trick.

“That’s what I work on in practice, to have a lot of different weapons,” Medvedev said earlier this month as he was leading Russia to the ATP Cup, in which players compete for their countries. “Sometimes it works, sometimes it doesn’t. Sometimes the opponent is too good, sometimes you don’t play good. It depends. It’s tennis.”

Medvedev’s approach has made him the player who now elicits the lusty praise of the tennis aesthetes. Jim Courier, the former world No. 1 and two-time Australian Open champion, has called Medvedev a “shape shifter” because of his talent for taking points where no one thought they would go and finding the undiscovered angle. John McEnroe, the seven-time Grand Slam champion and ESPN analyst who was a favorite among tennis snobs of a previous generation who could tolerate his temper tantrums, said Medvedev was his favorite player to watch right now.

“He’s like a chess master,” McEnroe said during a recent conference call. “He just plays old school a little bit. He’s strategizing, he’s thinking ahead. These are the types of guys that we need.”

Whether tennis gets them remains to be seen. So many players in the emerging generation rely so heavily on their cannon-like serves and forehands. Also, Medvedev, who does have a booming serve and the ability to blast groundstrokes when he needs to, is already 25 and has yet to win a Grand Slam title. Each year that passes without a major championship will only increase the questions about whether his creativity can prevail during repeated five-set showdowns in the biggest tournaments. (It takes seven consecutive victories to claim a Grand Slam title.) 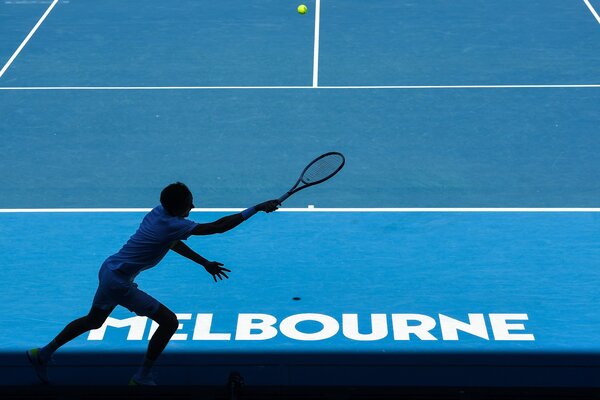 Medvedev’s next test occurs Wednesday, when he faces Andrey Rublev, a fellow Russian, close friend and tennis alter ego, in an Australian Open quarterfinal. Rublev rarely sees a ball he does not want to pound into oblivion, or a point he does not want to end as quickly as possible.

At 23, Rublev is two years younger than Medvedev and grew up playing junior tournaments against him in Russia. For a long time Rublev, seeded No. 8, and Karen Khachanov, 24, the third member of Russia’s latest golden generation, were better than Medvedev. The rise for Medvedev came in 2018 and 2019, when he nearly beat Rafael Nadal in the 2019 United States Open final.

“He reads the game really well,” Rublev said of Medvedev. “It’s amazing, the patience he has to stay so long in the rallies, to not rush, to take the time, because in the end these little details, they make him who he is.”

Russia is the only country with two players in the top 10. Khachanov gives it three in the top 20. Aslan Karatsev, 27, another Russian ranked No. 114, came out of nowhere to make the quarterfinals here in his first Grand Slam tournament.

Medvedev comes into the quarterfinal on perhaps the best roll of his career. He has won 18 consecutive singles matches. He won the ATP Tour finals in London in November, pulling off the nifty trick of beating the world’s top three players — Novak Djokovic, Nadal and Dominic Thiem — in a single tournament. For Russia at the ATP Cup, he beat Alexander Zverev of Germany, a 2020 U.S. Open finalist, in a tight, three-set match in the semifinal round.

Medvedev spent his early childhood in Moscow and played few sports other than tennis growing up. He worshiped Russia’s last golden generation, which included Marat Safin and Yevgeny Kafelnikov, who were in their prime when he was a young child. He moved to France to train as a teenager and became fluent in English and French.

Medvedev could be heard screaming at his coach, Gilles Cervara of France, in French during his third-round match against Filip Krajinovic of Serbia, as he frittered away a two-set lead before recovering to win the final set, 6-0.

As Krajinovic controlled the match in the third and fourth sets, Medvedev screamed at Cervara — who is prohibited from coaching during the match — to leave him alone and just let him play.

It was a flash of Medvedev’s personality from a few years ago, when, as he put it, he “could go crazy” at any moment.

“Sometimes that can still get out, and usually it doesn’t help me to play good,” he said.

Ultimately, it’s not clear how much any guidance can really affect such an idiosyncratic player and person, someone inclined to go his own way.

For instance, Medvedev has spoken with nutritionists about his diet. He is not so strikingly thin because he watches what he eats. He has the appetite of a horse and one of those metabolisms that allows him to sample all the offerings at a Viennese table and never gain a pound, which is good, because he has a major weakness for desserts. Tiramisù, pie, candy; if it is sweet, he wants it.

“Many people hate me probably for this,” he said. “I know that with age it can change, so I need to be careful about this because you never know when it’s coming.”

He swears he cuts back on his sugar intake during Grand Slam tournaments, but he also said he had several cakes waiting for him in his room for after the tournament.

He is hoping the cakes can wait a few more days and serve as a reward for him and his unique style.