He finished 20-under par and defeated Cameron Smith and Sunjae Im by five strokes.

It is Johnson’s second major championship.

Johnson struggled through his first few holes, leaving many wondering whether there would be an opening for Smith, Im or Justin Thomas to take advantage.

He made par on holes 1 and 2 and then birdied hole 3. But he raised eyebrows on holes 4 and 5 when hit recorded back-to-back bogeys. After the tough fifth hole, Johnson recovered nicely.

He would never bogey again for the rest of the round and recorded five birdies to help seal the deal. Johnson will get to wear the green jacket as Masters champion for the first time in his career.

FRUSTRATED J.J. WATT SNAPS AT TWEET OVER STRUGGLE TRYING TO WATCH THE MASTERS

The previous course records belonged to Jordan Spieth and Tiger Woods. Both golfers finished 18-under par for the course. Spieth tied Woods’ mark in 2015 with a four-stroke victory. Woods set the record previously held by Raymond Floyd in 1997 when he won the tournament by 12 strokes.

Johnson is the 12th player to win without ever trailing at the end of any round. 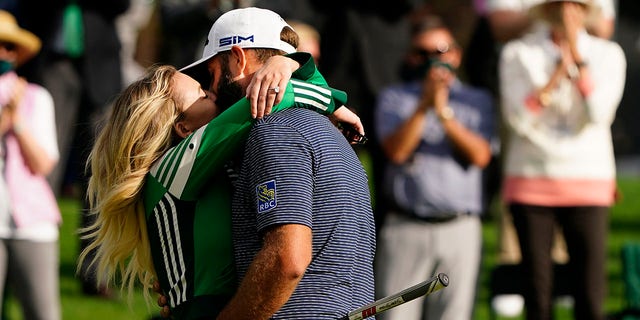 Woods, the defending Masters champion will be the one to hand Johnson the green jacket.

Woods had a rough final round at the Masters but had no real shot at getting into contention as the four aforementioned golfers had already pulled away by the end of the third round.

Woods recorded a septuple-bogey 10 on the 12th hole after hitting the ball into the water three times. He would birdie the last five of six holes to finish with a 76 in the round. His worst score ever at the Masters was a 77 in the third round of his first appearance in 1995.

Johnson may be putting a green jacket on someone else very soon. Because of the coronavirus pandemic, the 2020 Masters was pushed back from April to November. The 2021 Masters is expected to take place this coming April.