BRISBANE. — Bomb squads with sniffer dogs searched the Queen Elizabeth II Stadium yesterday after it was evacuated because of a bomb threat. 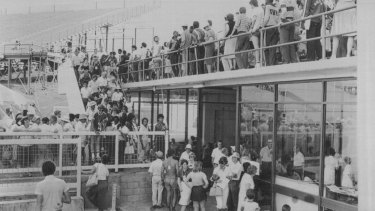 The Queen Elizabeth stadium in Brisbane is evacuated during the bomb scare.Credit:SMH Archives

Officials and athletes are now worried that daily bomb threats will seriously disrupt the Commonwealth Games, which open at the stadium tomorrow.

In yesterday's incident, which turned out to be a hoax, 1500 spectators, officials and athletes were evacuated for two hours during the final track and field pre-Games meeting. 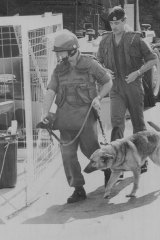 Police bomb squad and sniffer dogs arrive at the stadium during the bomb square.Credit:SMH Archives

An anonymous telephone caller warned that three bombs had been planted at the stadium, two of which would explode.

Security staff sealed off the area around the stadium, refusing to let the public in or out.

As soon as the call came, at 2.34 pm, units from Federal and State police, the fire brigade and the army were called in. Ten bomb disposal experts and sniffer dogs took 90 minutes to search the stadium, including the grandstand, which will hold 10,000 during the Games, before giving the all clear.

Officials are concerned that other calls could come during the Games, which will continue until 9 October. They also fear that threats may be directed at other Games venues including the Chandler Complex, where the swimming will begin on Friday.