Eager to reverse a recent trend, Marwin Gonzalez, Xander Bogaerts and the Boston Red Sox are off to a terrific start against their old rivals this season.

Bogaerts hit a two-run single with two outs in the 10th inning and the Red Sox held off the struggling Yankees, 6-5, in a wild finish Sunday night for their first three-game sweep in the Bronx since June 2011.

Gonzalez launched a tying homer in the seventh and made a slick defensive play at second base with a runner in scoring position for the final out. A fired-up Gonzalez also turned a tough double play in the bottom of the 10th — and committed a throwing error that put Tyler Wade on second with two outs after his R.B.I. infield single.

“It was a total team effort,” Red Sox Manager Alex Cora said. “We just grind games and we keep playing till the end.”

Gleyber Torres lined a tying double in the bottom of the ninth off closer Matt Barnes, but Boston (36-23) recovered to win its fourth straight and move a season-high 13 games over .500.

The Yankees went 9-1 versus the Red Sox last year and had won nine straight home series against them since August 2017 until Boston took the first three of 19 scheduled meetings this season.

It was the first sweep for the Red Sox in the longtime rivalry since taking four games at Fenway Park in August 2018 during their World Series championship season.

“It was real nice,” Bogaerts said with a grin. “We know we haven’t had a lot of success these last couple of years, but this team is different. We have a lot of winning players.

“I think this was a good statement that we made coming in here.”

Gary Sanchez had a two-run double off Garrett Richards in the first inning, but the fourth-place Yankees have dropped four in a row and 10 of 13.

“No concern at all. We’re a really good team,” Sanchez said through a translator. “There’s no doubt that we’re going to be able to get out of it.”

Alex Verdugo homered on the fifth pitch from Yankees starter Domingo German, the only run he gave up in five and two-thirds innings.

Gonzalez connected for a two-run shot off reliever Lucas Luetge following a leadoff walk on four pitches to Hunter Renfroe.

“It’s no secret I’ve been grinding offensively lately,” said Gonzalez, who began the night batting .201 with one home run. “It was special to hit that homer and tie the game.”

Boston is 15-3 in its last 18 games against A.L. East opponents and leads the majors with 21 comeback wins.

Stroman Helps Himself in Win Over Padres 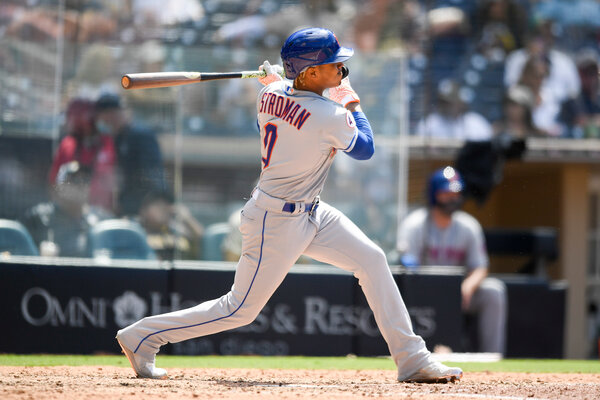 SAN DIEGO — Marcus Stroman won his second straight decision after four consecutive losses and doubled in a run, leading the Mets over the San Diego Padres, 6-2, on Sunday for a four-game split.

Stroman (5-4) gave up an unearned run and four hits in six and two-thirds innings with seven strikeouts and four walks, his most since Sept. 12, 2019. He hit an R.B.I. double down the left-field line in the seventh inning, scoring Jose Peraza from first for a 4-1 lead.

“We used a lot of split-changes today, sliders, sinkers — I kind of threw everything,” Stroman said. “Their lineup is incredible. That is one of the best lineups in baseball, so I think you just have to have a great mix.”

San Diego loaded the bases in the fourth when Webster Rivas hit a sharp grounder to third baseman Brandon Drury, who grabbed the ball while on his knee, tagged third and threw to first for an inning-ending double play.

“That was huge, I thanked him about a million times throughout the game,” Stroman said of Drury. “It is a huge momentum shift right there when I am able to get out of that inning pretty much unscathed.”

Miguel Castro and Trevor May finished a six-hitter. The Mets have won eight of 11 heading into an off day following a flight to Baltimore, where they start a two-game series Tuesday that completes a nine-game trip.

San Diego was held to four runs and 17 hits in the final three games of the series. The Padres lost for the sixth time in their last eight games.

“He didn’t have his best command, but he was able to bounce back so I think he set the tone,” Mets Manager Luis Rojas said of Stroman. “This is a good offensive team. To keep them quiet for two straight games that’s going to give the batters a chance to score enough runs for us to win.

“We took advantage of some pitches left up in the zone. But it is the pitching again that is setting the tone for us.”

Eric Hosmer hit an R.B.I. grounder in the sixth after Fernando Tatis Jr. reached third leading off with a comebacker. Stroman, a Gold Glove-winning pitcher, bounced his throw past Pete Alonso for an error that was compounded when the first baseman, while trying to throw, let the ball slip out of his hand and roll wildly down foul territory in front of San Diego’s dugout on the first-base side for another error.

Tommy Pham got the Padres’ second run-scoring grounder in the ninth.

Padres Manager Jayce Tingler was ejected in the first inning by plate umpire Tripp Gibson after leaving to argue a ball four call on Chris Paddack against Dominic Smith, who umps decided held on a check swing. Tingler has been ejected six times, including four this season.

“I was ultimately just super frustrated,” Tingler said. “Right now, offensively we aren’t scoring enough runs. Right now, we are in the middle of the pack crossing the dish. We have got to get more balls in the air.”

Paddack (2-5) dropped to 1-4 in his last seven starts, giving up three runs and six hits in six innings.