Herschel Walker was the star freshman running back on Georgia when he led the Bulldogs to their last national championship in 1980 and was among the first to congratulate Kirby Smart and the team for beating Alabama for the title on Monday night.

Walker, who is running for U.S. Senate in Georgia, was among those who were pumped for the Bulldogs’ 33-18 victory over Alabama. In 1980, Walker ran for 1,616 yards and 15 touchdowns and helped the team beat Notre Dame for the title in the Sugar Bowl. Walker had 150 yards and a TD in that game. 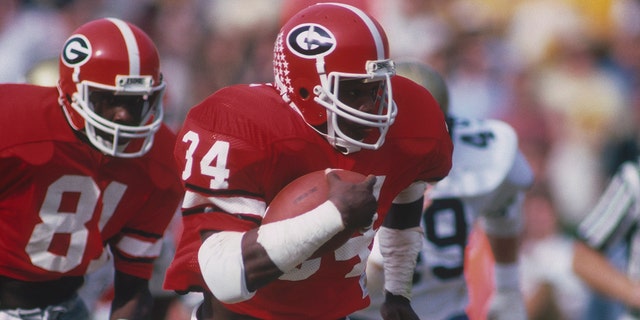 Georgia Bulldogs’ running back Herschel Walker #34 runs with the ball during a circa 1980s game.
(Focus on Sport via Getty Images)

University of Georgia’s running back Herschel Walker #34 looks over his shoulder from the sidelines during a game circa 1980-1982. Herschel Walker was elected to the College Football Hall of Fame in 1999.
(Focus on Sport via Getty Images)

With 3:33 left, Heisman Trophy-winning quarterback Bryce Young would get the ball back to try to force overtime. Young would throw a Pick Six to Kelee Ringo, which would seal the deal. 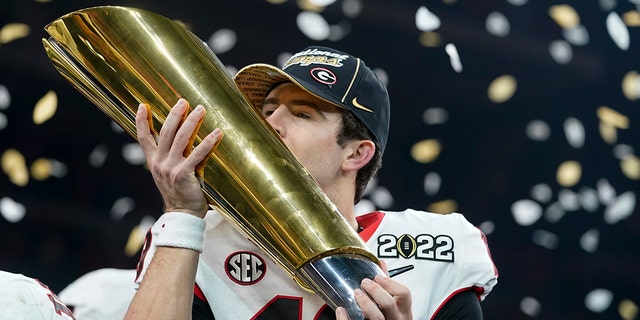 Bennett finished 17-for-26 with 224 passing yards and two touchdown passes. Mitchell had two catches for 50 yards and Bowers had four catches for 36 yards.