When the Dodgers won the National League pennant last week, Dave Roberts, the Los Angeles manager, was unusually emotional as he spoke at a lectern about how this would prove to be the Dodgers’ year.

Roberts is normally seen as an unflappable, self-possessed figure standing in the dugout, calmly writing snippets of tactical information and other managerial data into a small blue notebook.

Some of those attributes are innate, but Roberts credits an early mentor named Jeff Manto for teaching him the value of a measured and composed approach to baseball through a specific technique that still serves him, as he seeks to block out the tumult while attempting to guide the Dodgers to their first World Series title in 32 years.

“You want to make sure it doesn’t speed up on you,” Roberts said on Friday before his Dodgers beat the Tampa Bay Rays, 6-2, in Game 3 of the World Series.

Baseball may appear ponderously slow to some. But for a manager, time can move rapidly during games, as crucial decisions roll by in speedy succession, especially late in games when vital elements stack up: the status of each of the manager’s own players and the other team’s players; the state of the game; how someone looked in a previous at-bat; weather conditions; field conditions; piles of statistical information that need to be sorted, prioritized and applied at the right moments. And all of it measured against gut instinct.

Roberts, who has led the Dodgers to three World Series since he was hired in 2016, had much less to worry about when he was a 26-year-old minor leaguer simply hoping to break into the majors.

In 1998, he had just been traded by the Detroit Tigers to the Cleveland Indians and sent to the Class AAA Buffalo Bisons. It was there that he met Manto, a veteran minor-league third baseman for several organizations. 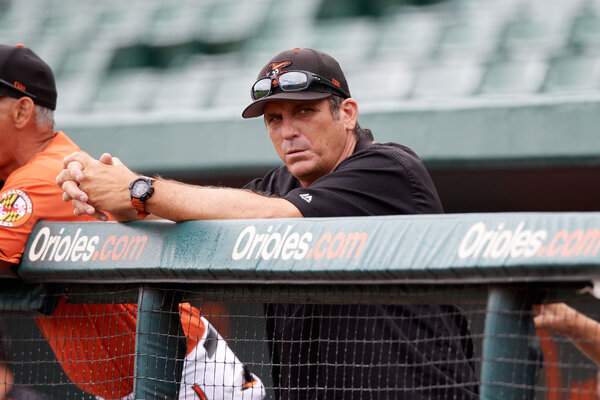 Manto was 33 at the time and had played over 1,100 games in a 15-year career, mostly in the minor leagues and Japan. But he also shuttled back and forth to major league clubs in places like Cleveland, Baltimore, Boston, Seattle and the Bronx. He was as respected and knowledgeable as he was persistent. He is one of only three Bisons players to have his uniform number retired.

Roberts describes Manto as a Crash Davis type, referring to the main character in the movie “Bull Durham” — a sage veteran of the minor league circuit with much to teach. Roberts, known for his curiosity, soaked up a good deal of it.

“When he came to our ball club, he was high, high energy,” Manto said of Roberts last week in a telephone interview. “But the main thing was that he wanted information. He was always asking quality questions to the veteran guys about how to do everything. It made an impression on you.”

The feeling was mutual, because Roberts recalled how Manto, who now runs a player development academy in Pennsylvania, explained to him one of the keys to success in professional baseball, a method to prevent the game from spinning out of control.

“It was one of the tricks I learned over the years,” Manto said. “When things started speeding up and something was going too fast — maybe even off the field, like a family situation — I would do everything slower.

“I drove the speed limit to get me back to point, I’d eat slower. Whatever that means, it meant a lot to me.”

It also meant something to Roberts, who still recalled the advice 22 years later. On game days, Roberts would drink his coffee slowly, move around his house slowly, get to the park early and get dressed slowly. And when it came time to hit, he would walk slowly to the batter’s box.

This is perhaps a bit unexpected for a player whose singular moment of fame — stealing second base in Game 4 of the 2004 American League Championship Series to ignite the Red Sox’s historic comeback against the Yankees — was all about speed. But mentally, the approach needs to be relaxed enough to make the game appear slow.

“When Dave stole that base, I knew there was some element of it that he had learned by asking a question,” Manto said. “There is no doubt. Maybe it was his lead, how to read the pitcher, checking the catcher. Maybe all of it. But that is what made him unique.”

Manto described Roberts as extremely respectful, not only to him, but also to the game and to the process of being a player and a teammate. Once, in 1999 in Buffalo, Roberts was responsible for the shoebox that contained the fine payments for the players’ kangaroo court. But he lost it, and the money inside. Some of the players told Manto, who was the judge that week, and he waited to see how Roberts would respond.

“He came up to me a couple days later and just told me the truth,” Manto said. “He said he left it on the bus. In Double-A, you use the same bus all the time. But in Triple-A, one bus leaves and another one picks you up. He was really apologetic, and I just told him to pay it back. But it showed how seriously he took it, because it was about being a part of a team.”

Roberts made an impression on many people back then, including Mark Shapiro, now the president of the Toronto Blue Jays. In 1998 Shapiro was Cleveland’s assistant general manager, and even though the two spent only a couple of years in the same organization, they remain friendly. Shapiro calls Roberts one of five or six people in his career with whom he shares a special connection.

Three years after Roberts left Cleveland, he ended up in Boston on a team that would make history in October 2004. Shapiro told Roberts at the time that his brother David, who worked for a nonprofit, lived in a modest home in Boston and that he should visit for dinner.

Shapiro said he wished he could claim he always knew Roberts would make a successful manager, but he admits he never really through of it, mostly because he was focused on him as a player and later as a friend. Now, even when Roberts gets criticized for a decision that backfires, he realizes it makes perfect sense.

“He’s so well-grounded and authentic,” Shapiro said. “That is what enables him to deal with things, the criticism that comes with the job. He definitely learned a lot along the way, but a lot of it is just who he is.”

Years later, Roberts is the mentor to a group of players who appreciate his calm, steady approach. Mookie Betts, the Dodgers star right fielder, said players respond well to Roberts’s demeanor, and noted how it helped when they fell behind in the N.L.C.S.

“Even when we were down 3-1 against Atlanta, he still believed, he still was the same guy,” Betts said. “He had no panic in him.”