After he was humbled and before he was heroic, Mike Brosseau was ready. The 2016 major league draft had come and gone, 30 teams passing on him for 40 rounds. Nobody wanted a senior shortstop with pop, plate discipline and a .355 average in the Horizon League. Brosseau packed his bags for pro ball, anyway.

A Tampa Bay Rays scout, James Bonnici, had seen Brosseau play at Oakland University in Rochester, Mich., but did not imagine him launching the Rays into the American League Championship Series someday with a home run off the Yankees’ Aroldis Chapman. He had not even recommended Brosseau for the draft.

“You couldn’t put a huge tool grade on anything he had,” Bonnici said by phone on Sunday. “He picked up the ball fine, got it across the infield, he ran fine, he always hit the baseball, but he was undersized. It’s the industry’s fault: You always want the 6-foot-4 guy that’s athletic. You get a guy that’s 5-foot-9 with a stockier build, you think, ‘OK, good college guy.’”

But the Rays had told Bonnici that their Gulf Coast League team in Port Charlotte, Fla., was short an infielder, and asked if he knew anyone. A “good college guy,” he figured, could fill out a roster for a summer, and his friend John Musachio, the baseball coach at Oakland at the time, had always pushed for Brosseau.

So Bonnici arranged to meet with Brosseau at the Red Ox Tavern near Oakland’s campus, explained that the Rays needed a body at their lowest minor league level, and offered him $1,000 to sign. Brosseau accepted on the spot, and all but asked for directions to Port Charlotte.

“He was like, ‘My bags are in the car,’” Bonnici said. “He was ready to drive down there. I said, ‘You want to go now? I was planning to send you out tomorrow morning,’ and he goes, ‘No, I want to go now.’ I called our travel agent and got him on a flight and he was down there that evening.”

Brosseau had no time to waste. On Monday, before Game 2 of the American League Championship Series against the Houston Astros, he acknowledged he had no career backup plan. His university had not produced a major leaguer since the 1970s (pitcher Don Kirkwood), and teams had just deemed 1,216 others to be more worthy of a chance via the draft.

But Brosseau trusted his skills and statistics. He had consistently excelled in college, with a 1.022 on-base plus slugging percentage as a senior. Somehow, he thought, his performance would earn him a chance.

“I thought I did what I could to get on teams’ radars,” he said last Friday, after his go-ahead homer off Chapman, who had buzzed him with a fastball last month at Yankee Stadium. “It didn’t work out that way, but it was kind of a blessing in disguise. When I take a step back after every season and see how everything unfolded, there’s still that chip on the shoulder, for sure. It’s a day that I look at quite often, honestly — that day in June in 2016 when nobody wanted me. That’s always a driving factor.” 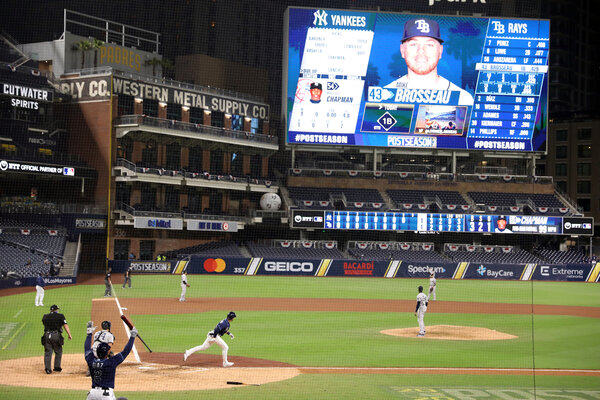 Musachio had also been undrafted, but played a year in the minors for the Chicago White Sox organization. He saw an uncommon drive in Brosseau, an inner confidence that could help him outlast more heralded prospects.

“Pro ball’s not for everybody,” Musachio said. “Night in and night out, you’re going up against electric arms, the relentless grind of professional baseball — I’m not going to call scouts unless I feel really good about the makeup of the young man being able to handle that life and that failure. If you don’t have a strong psyche and a lot of mental and emotional resilience, you’re going to get eaten alive — and we knew Mike wouldn’t.”

Brosseau reported to the Gulf Coast League and hit .319. At two Class A levels in 2017, he hit .321. The Rays then sent him to Perth, Australia, and he hit .427 in a winter league. He kept climbing the minor-league ladder, and he never stopped hitting.

“The tools didn’t stick out when he came to us — they were OK — but he got better,” said the Rays senior adviser Mitch Lukevics, the team’s farm director when Brosseau signed. “He got stronger, he had the will to learn, he did it without complaint — and he hit. And when you hit, you hang around. And when you hang around, you get an opportunity.”

The Rays emphasize versatility, so Brosseau learned how to play every infield position, as well as left field. By June 2019, just three years after that meeting at the Red Ox, he had earned his way to the majors, pushed by minor league coaches with the same vigor Musachio had shown Bonnici.

“Our player development pounded the table for this guy to get an opportunity,” Rays Manager Kevin Cash said. “‘You’re going to love him, he can help you win in so many ways, his intangibles are off the charts — and on top of that, he’s a really good baseball player.’”

Brosseau batted .273 in 50 games for the Rays last season, then played three infield positions in their wild-card victory over the Oakland A’s. He hit .302 this year, with a .738 slugging percentage against left-handers that makes him an ideal platoon option.

Brosseau did not start against the Yankees right-hander Gerrit Cole for Game 5 of the division series in San Diego. But he entered as a pinch-hitter against the left-hander Zack Britton and connected off Chapman, the most intimidating lefty of all, on the 10th pitch of an epic at-bat.

The homer — and the final three outs from reliever Diego Castillo — put the Rays in the A.L.C.S. for the first time since 2008. They do not plan to stop there, and neither does their most unlikely contributor.

“There’s definitely some good feelings about where I’m at right now, but the story goes on,” Brosseau said. “I’m going to do my best to make sure this isn’t the last of it.”