Baseball megastar Manny Ramirez laughs when you ask him to say a few nice things about Rachel Balkovec.

“Rachel has helped me a lot with training, lifting, hitting,” Ramirez said, as he braved the heat in Sydney’s west on Thursday. 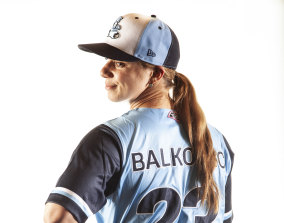 “She’s smart, she’s a woman of integrity, she knows what she wants and she’s persistent. Rachel has a big future.”

Balkovec made headlines last year when appointed the New York Yankees’ first full-time female hitting coach. It was a big deal. And because of the COVID-19 lockdown in America, she took the opportunity to escape to Australia for the summer and join Ramirez at the Sydney Blue Sox.

Ramirez is a 12-time All Star and two-time World Series champion with the Boston Red Sox whose reputation speaks for itself. He is enjoying a city apartment with glorious views – his one request was a pad without carpet because of allergies – a flashy car and the beauty of remaining anonymous in public.

Even though the 48-year-old Ramirez is worth more than $100 million, Sydneysiders wearing the Boston caps have no idea who he is. 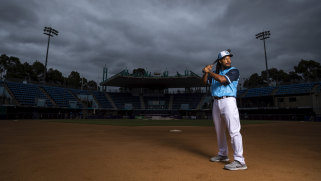 The 33-year-old was once told by a Major League franchise she would not be hired “because you’re female”. 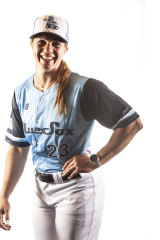 So she changed her name on her CV to “Rae” and sat back and took phone calls from interested clubs thinking she was a male.

As she perched herself high in the stands before the Blue Sox faced the Melbourne Aces in their Australian Baseball League opener on Thursday, Balkovec told the Herald: “Diversity is a buzzword. Hiring women now is popular. I can say that confidently and it’s the truth. Back in 2013, it wasn’t so popular.

“A team called me in the middle of spring training in 2013, they said, ‘Are you in the Phoenix area because we need someone tomorrow’.

“They said they’d call and get the paperwork sorted.

“But they never got back to me. A few weeks later this guy finally called and said, ‘I’m sorry to be the bearer of bad news, but I want to be honest and tell you the reason we couldn’t hire you is because you’re a woman’. I won’t say the name of the team.

“But this guy said, ‘I wanted to hire you, but when I told them who I wanted to hire, from the administration all the way up to ownership, it was an ‘absolutely not’.

“I was way over-qualified for internships but I was getting nothing back.

“So the next year came around and I thought I can’t take any chances, so I’ll change my name to ‘Rae’. That way I might at least be able to get a phone interview. I was desperate.

“I made my CV all gender neutral, and I changed division-1 softball catcher to division-1 catcher. I sent it to about 10 major league organisations.

“When I sent it out I got all these responses back.″⁣

Balkovec landed a job with the St Louis Cardinals, where she had completed one of her six internships a year earlier, and went on to work with the Houston Astros before linking with the famous Yankees last year.

Balkovec knows so much has changed for women in sport and society the past seven years. She loves to work hard. She has moved 15 times in 12 years. She has kept herself so busy in Sydney she has passed on the chance to surf at Cronulla and do the Harbour Bridge climb.

Balkovec learned to embrace being the underdog while growing up in blue-collar Nebraska. Not once did she give up on her Major League dream.

Balkovec, whose name has Slovenian roots, wants to be a general manager of a Major League organisation.

Blue Sox general manager Shane Barclay is backing Balkovec to become the second female GM. Sydney owner Adam Dobb, who was interviewed this week for the New York Times about Ramirez, said he could no longer split the importance of Ramirez and Balkovec to his organisation.

“Six weeks ago if you had asked me to prioritise who would be the most influential person to us this year out of Manny and Rachel, I would have said ‘Manny’ without batting an eyelid,” Dobb said.

Ramirez missed Thursday’s opener with an oblique injury. He will play his first ABL game after Christmas. Balkovec will make sure he is ready.

Sports news, results and expert commentary delivered straight to your inbox each weekday. Sign up here.