Halfway through the Super Netball season it's time to break out the oranges, take a knee and cast an eye over each team. 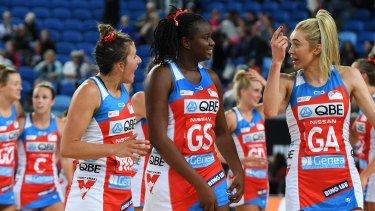 The NSW Swifts have been the best team in Super netball so far this season.Credit:JAMES ROSS

Up until mid way through the third quarter of Sunday's smashing of the Queensland Firebirds, when Maddy Proud ruptured her ACL, it was tempting to think that no other team was going to get close to the Swifts this year. They are a complete package, with a defensive end that is gaining in confidence, a workhorse midcourt, a lethal shooting line and unbelievably strong belief in themselves. They will be sorely tested though by the loss of proud and will be relying on English rose Natalie Haythornthwaite to get through the World Cup and bolster their midcourt in the closing rounds of the season.

Yet to settle on a consistent starting line, last year's premiers have had a mixed<!–ffxnote–>season. After capitulating to the Collingwood Magpies in round one, they then reeled off four straight wins to be looking the goods until being thumped by the Vixens and limping home against the Thunderbirds in recent weeks. Their major trump card is their coach, Noeline Taurua, who is as astute a string-puller as any coach in any league in the world. You get the distinct impression that she is looking over our heads towards the end of the year while the rest of us get our knickers in a knot about short-term results. 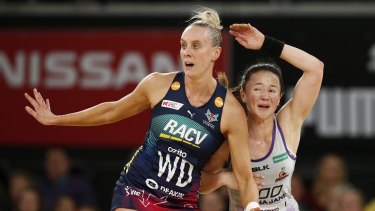 Early favourites Vixens have been exposed occasionally this season as a team that knows only two speeds – fast and faster. Veteran shooter Caitlin Thwaites has settled in well and Renae Ingles has added steel to the back line. The challenge for this super-talented young outfit is not to make the finals – they are almost a certainty to do so – but rather to win their first Super Netball post-season game. Having missed the finals last year after going out in straight sets the year before, the end of the season is where the real mind games will begin.

I'm going to admit I thought the Giants would finish in the bottom two this year. I thought the double blow of losing Serena Guthrie and Bec Bulley would be too much, and they would not be able to win enough ball back to be competitive. Yet here they are, sitting fourth and looking more ominous by the week as Caitlin Bassett finds some form and the defensive line improves with each outing, including the rise and rise of young wing defender Amy Parmenter. Of course with Julie Fitzgerald as their coach, no one should be surprised, and yes, I should have known better. 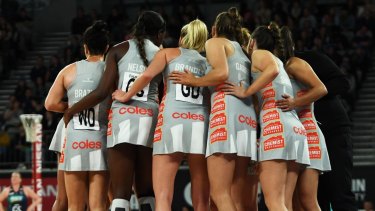 The Magpies got a much-needed derby win last weekend.Credit:JAMES ROSS

Sitting just outside the top four, the Magpies salvaged some redemption from a disappointing opening half of the season by racking up a much needed victory against their cross-town rivals the Vixens last weekend. Prior to this win they looked out of sorts, out of form and out of ideas, which is almost unthinkable given the massive talent they have in their ranks. With just three wins and a draw at the halfway mark they will need a much better return if they are to avoid missing the finals for the second year in a row.

Injuries to bookends Jhaniele Fowler and Courtney Bruce have cruelled the high hopes for last year's grand finalists. However with minimal personnel disruption during the World Cup – only two players, Fowler and Bruce, are playing – the experience gained in last year's run to the grand final could make them dangerous in the second half of the season, although they will need a mighty run home to play finals. 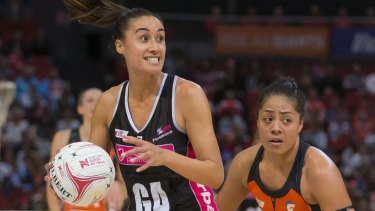 Star recruit Maria Folau’s Thunderbirds have improved, but not by much.Credit:Craig Golding

A stellar line-up has not quite produced the stellar form that is needed to threaten the season frontrunners. With star recruits Maria Folau and Shamera Sterling at each end of the court, the Thunderbirds were always going to be better than their last two seasons. Having said that, it is a low bar that they have only just managed to clamber over. While they have won back plenty of ball – they have more defensive gains than any other team in the competition – they have struggled to convert it, shooting less goals at a lower accuracy than anyone else.

Still looking for their first win, the once fearsome Queensland side is a shadow of its former self. The retirement of Laura Geitz was always going to hurt, but it has gone from bad to worse with injuries to key players Mahalia Cassidy, Romelda Aiken and Kim Jenner robbing their line-up of any stability. There have been some bright notes, with the form of goal attack Gretel Tippett nothing short of phenomenal, and a young defence line that will be a menace in years to come. Their myriad fans will need to stick strong because it's going to be a loooooong season.