But a spokesperson for World Athletics, the sport’s international federation, said testing is necessary to preserve “fair and meaningful competition” in women’s sports.

The conversation on this contentious topic, which encompasses both the right to participate and the need to protect women’s sports, continues to center around South Africa’s Caster Semenya. She is the two-time Olympic gold medalist in the women’s 800 meters who has a rare genetic condition that significantly elevates her testosterone levels.

Semenya, 29, will not be able to defend her title at the rescheduled Tokyo Olympic Games in 2021 unless she agrees to lower her testosterone levels through hormone therapy, according to a regulation that was put in place by World Athletics in 2018 and upheld by the Court of Arbitration for Sport and the Swiss Supreme Court. Semenya has said she will not comply with the 2018 rule. 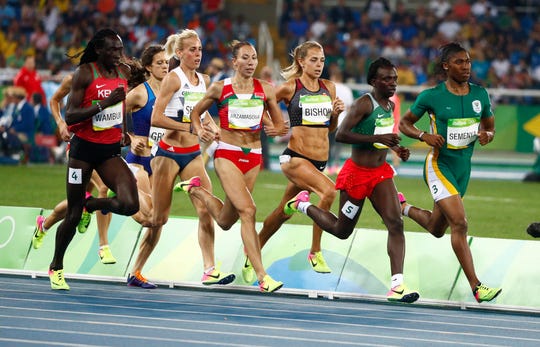 Human Rights Watch’s 120-page report, detailing “practices that violate fundamental rights to privacy and dignity,” is based on interviews with 13 female athletes. When asked how many women around the world were subject to these practices, report co-author Kyle Knight said in an interview with USA TODAY Sports that he didn’t know, but “13 obviously is an undercount.”

Said Knight: “In concert with the United Nations, HRW is calling for an end to sex testing and the institution of a human rights policy at World Athletics that corresponds with international human rights law.”

“We remain committed to fairness for women in sport and reject the allegation that biological limits are based on race or gender stereotypes,” Jeffery said. “On the contrary, they provide an objective and scientific measure to define the category, and are a necessary, reasonable and proportionate means of attaining what both the Court of Arbitration for Sport and the Swiss Federation Tribunal agreed was a legitimate objective, namely preserving fair and meaningful competition in the female category.”

In its report, titled “They’re Chasing Us Away from Sport,” Human Rights Watch told the stories of the 13 female athletes from Asian and African nations, who spoke of racist and sexist policies that resulted in physical and psychological trauma, humiliation and the loss of careers.

“World Athletics eligibility regulations for the female classification constitute a continuation of the historic harms of sex testing, and do more than just drive women out of sport: they ruin lives,” the report said.

Added Knight, “I don’t think this conversation ends quickly and it certainly doesn’t end in the next couple years. It’s going to keep coming up.”