Former Indigenous Diamonds have revealed the "anger" they expressed to Netball Australia after Jemma Mi Mi was snubbed for court time during Super Netball's Indigenous round.

Mi Mi is the only Indigenous player in the league and received no court time, despite being used for promotion of the round.

In response to backlash over the incident, Netball Australia announced on Monday that 20 national, state and territory-based and club bodies had signed a 'Declaration of Commitment' to acknowledge the barriers experienced by Indigenous athletes, referees and coaches in netball. 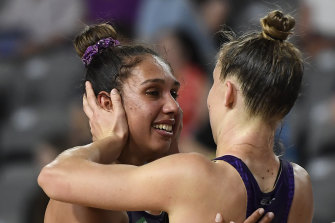 Jemma Mi Mi is at the centre of a storm in Super Netball.Credit:Getty Images

"I would expect to see a significant increase in Aboriginal and Torres Strait Islander involvement in netball, right from grassroots to the Diamonds, and not just in a voluntary capacity, but in paid positions over the next five years," she said.

Netball Queensland boss Eugenie Buckley defended the Mi Mi incident and said the round as a whole was rushed due to COVID-19.

"Not making excuses, but looking at the context of COVID, we have to remember that normally the Indigenous round you would have four different matches across four different states in Australia with nine months preparation of each state," she said. "Just in an operational sense, I think we had two weeks notice."

Buckley said it was now a matter of shifting the conversation "away from [Mi Mi]" and looking towards the future.

"Everyone had their heart in the right place and the willingness, I just think we can't look at the 2020 indigenous round and think that is where it is," she said. "I'm not necessarily in full agreement that she was front and centre of everything."

Netball Australia chief executive Marne Fechner offered an apology to any Indigenous person within the netball community who felt barriers within the sport had not yet been acknowledged.

"We know that it is unacceptable to only have one Aboriginal player in Suncorp Super Netball league, but our challenge as a sport goes far beyond what happened to one player in one single game," Fechner said.

Sports news, results and expert commentary delivered straight to your inbox each weekday. Sign up here.