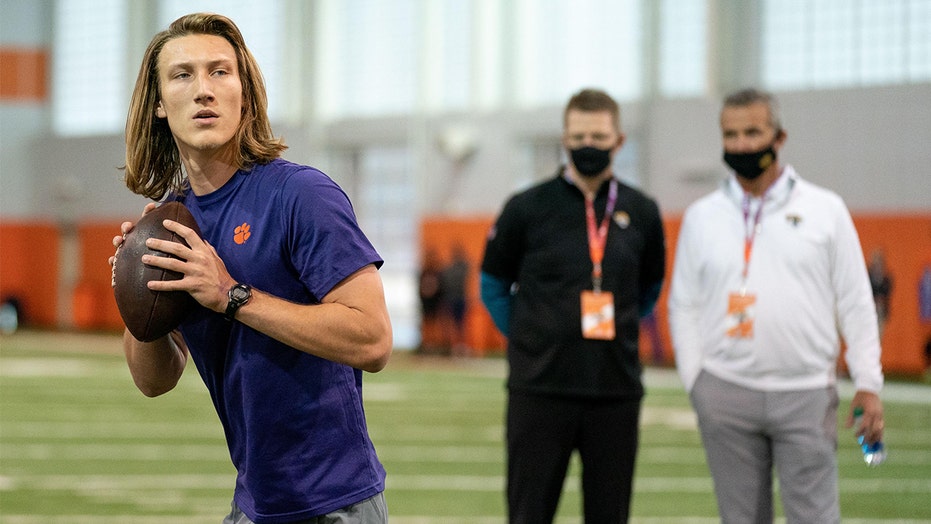 The Jacksonville Jaguars will be drafting former Clemson quarterback Trevor Lawrence with the No. 1 overall pick in next month’s draft — unofficially, of course.

First-year head coach Urban Meyer was asked directly about Lawrence in an interview this week with veteran sportswriter Peter King and admitted that the Jaguars are headed in that “direction.”

JAGUARS’ URBAN MEYERLOKS TO TOM BRADY AS EXAMPLE FOR QUARTERBACKS, RECALLS MINICAMP: ‘I WAS BLOWN AWAY’

Lawrence finished his junior season with 3,153 passing yards, 24 touchdowns and only five interceptions in 2020. Clemson was undefeated with a 9-0 record with Lawrence under center but lost in the College Football Playoff semifinals to Ohio State.

But Meyer sees Lawrence’s talents as more than just what he has to offer on the field.

“Trevor checks all the boxes, you know?” he told King. “The number one common quality of every great player, not just quarterback, is a competitive maniac. He’s 34-2. Won a national title as a true freshman. Is a winner. I’ve seen him up close and in person compete.”

Meyer said he has seen it in the past “when the guys get drafted high, a lot of people get . . . They have influences in their life. Like, whether it be social media, whether it be other things that really don’t pertain to winning. What I’m really pleased with and I don’t want to say surprised, but him, his agent, his family, they’re focused on one thing. He wants to become the best version of himself for the National Football League, which is, well, it is somewhat refreshing.”

Lawrence has reportedly declined the NFL’s invitation to attend the draft and will instead watch it at Clemson with a few family members and friends.