‘You’re a fighter… let’s hope we can give you a great memory’: Jurgen Klopp and James Milner send poignant messages to Liverpool fan who was due to go to Madrid but now has just days to live after being diagnosed with cancer

A Liverpool fan from Coventry who is fighting to stay alive to watch his beloved Reds in the Champions League final has been blown away after receiving messages of support from Jurgen Klopp and James Milner.

Dave Evans was diagnosed with terminal cancer just weeks after emigrating from Coventry to New Zealand.

He and wife Liz saved £10,000 as the club made it through each stage of the Champions League, and even booked a hotel in Madrid ready for the final. 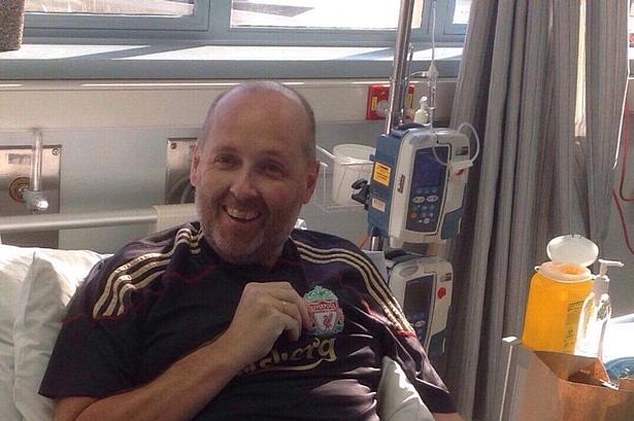 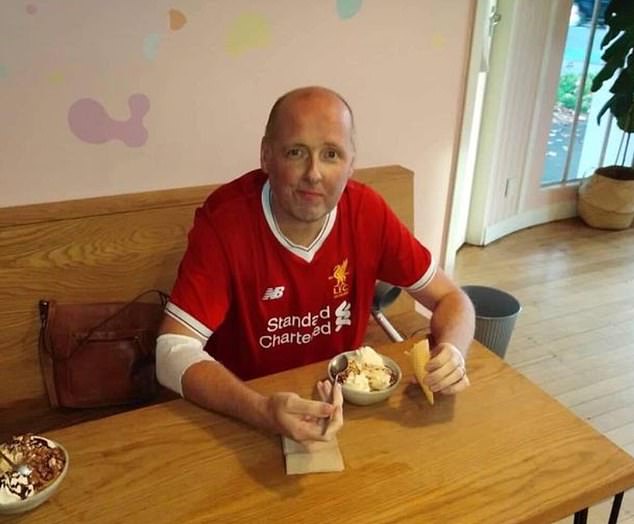 However, now the hope is for him to make it through the next 36 hours so he can watch his beloved club in the European final from a hospice bed.

In the last day, messages from across the football world have been pouring in for Dave, including support from former Liverpool player Stan Collymore.

Dave’s wife Liz, a mental health nurse, has also set out to get as many video well wishes from Liverpool legends past and present and the response has been phenomenal.

In the last 24 hours alone, Dave has received videos from Jamie Carragher, and current Liverpool player Milner and manager Klopp.

Just moments before heading out to Madrid, Klopp said: ‘Hi Dave, Jurgen Klopp here from Liverpool in a moment like an hour before we leave to Madrid.

‘I heard about your story and of course it is something really difficult to take even for me but of course you.

‘I heard you are an unbelievable fighter but the only thing I can tell you is we think of you. You are really with us.

‘That is the only message I want to give to you and that you fought so hard I could not make comparisons to what the team did over the year because it is more than football, it is about life and the only thing what we would try to do the whole year is to give people some hope. Some joy. Some good moments to remember. 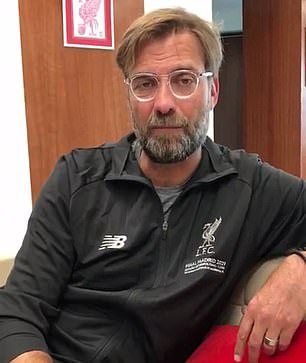 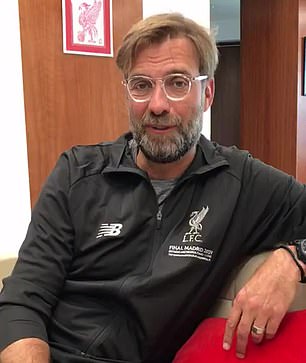 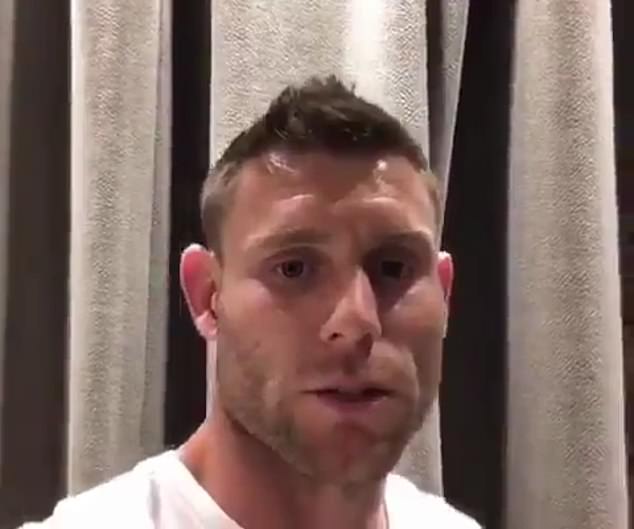 James Milner also weighed in with a message: ‘We’ll do everything we can to do our job’

‘We share these moments. This season or three and a half years since I’m in. We share these experiences. That makes us actually friends.

‘I wish you from the bottom of my heart all the best and I’m Christian so see you.’

Milner, who is travelling out with the squad to Madrid for the final, also took time out to send a message of support to Dave.

‘I hear you’re not going to make it to Madrid unfortunately and know you’ll be supporting us from home and we’ll do everything we can to do our job and finish the job and hopefully win a trophy and just wanted to send my best wishes to you and the family. All the best.’

Club captain Jordan Henderson has become the latest player to send his best wishes to Dave on the eve of the final.

Henderson said: ‘Hi Dave, it’s Jordan. I’ve heard you have been going through a tough time lately so I just wanted to send my best wishes to you.

‘I know you can’t get over to the game in Madrid tomorrow but hopefully we can do the business and bring the trophy back for you. Take care mate.’

Dave and Liz also found positivity in getting former Liverpool players to send videos with well wishes, but were blown away by the message from Milner.

Liz said: ‘It is just unreal. ‘I woke up at 4am and we just had so many messages.

‘When I saw Jamie Carragher had sent a message, I woke Dave up and we just couldn’t believe it. 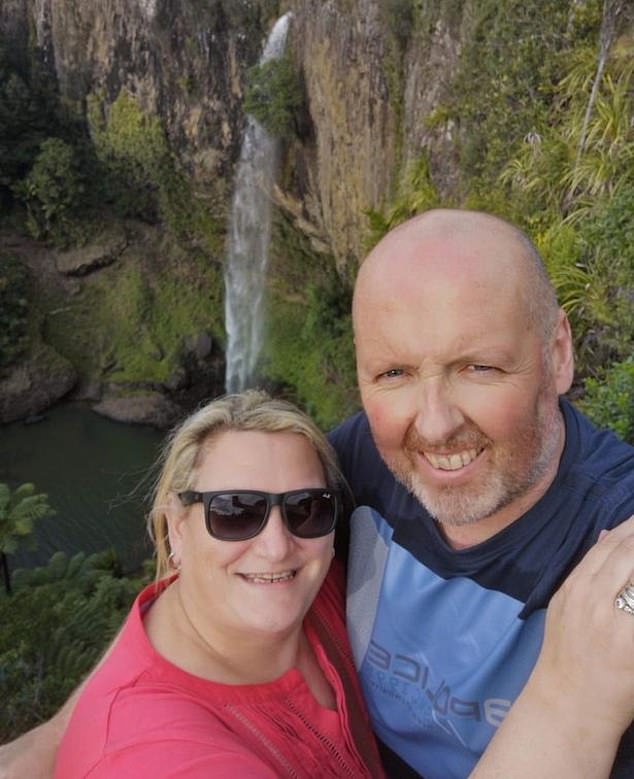 Dave with his wife Liz, who said the pair have been ‘completely blown away’ by the messages 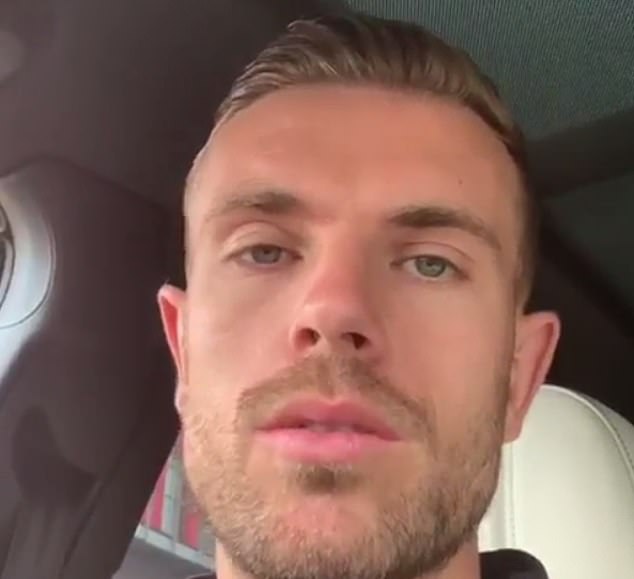 ‘You just can’t make it up. We were completely blown away when we received the message of James Milner.

‘For him to take five minutes out of his time to wish Dave well when he’s just a day away from such a big game means so much.

‘The love and support as well from Stan Collymore and all of the replies to that just really lift your spirits.

‘It’s really made Dave smile, and kept us positive.’

Jamie Redknapp sent a video saying: ‘Hi Dave it’s Jamie Redknapp here, how you doing mate, I heard its been a tough time for you lately but you’re keeping strong and you’ve got a massive game on Saturday to look forward to.

‘I’m in New York at the moment so will be watching, cheering the reds on fingers crossed we can do it.’

In a Tweet, Stan Collymore asked the football club to show Dave some support.

He Tweeted: ‘Dear @LFC I have a little favour, if I may…. Dave Evans is a Red from Coventry. He has terminal cancer and is holding on, very poorly to see the Final at home. One message from one of the boys will energise him beyond words. Let him know he’ll never walk alone.’

Dave had made plans in the New Year to go to Madrid if Liverpool reached the final. 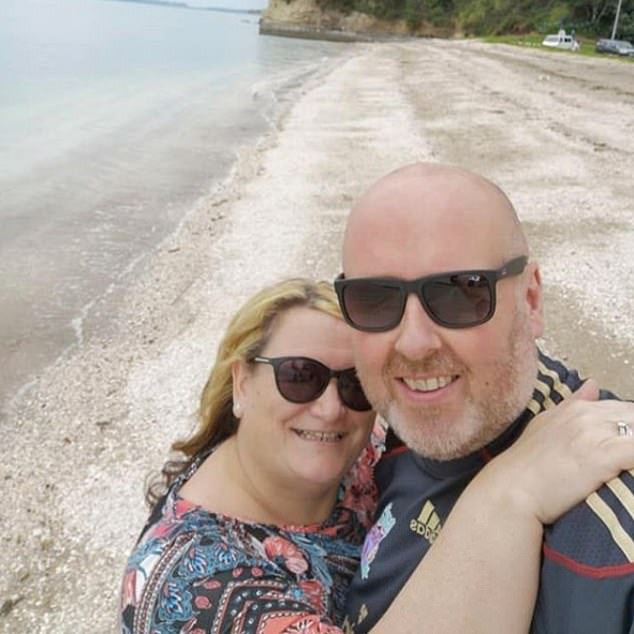 He booked the hotel and he and Liz saved for the trip, but now they just hope he makes it to watch the final on TV.

The couple had medicals before they arrived in New Zealand, but after Dave had a stomach ache that wouldn’t go away, he was sent for a number of scans.

After various tests, x-rays and scans, a 12cm tumour was found and was diagnosed with bile duct cancer (Cholangiocarcinoma).

When the tumour was found, the cancer was in its final stages, and only chemotherapy would prolong Dave’s life.

Within eight weeks of the diagnosis, the tumour had grown three times the size.

Just three weeks ago, Dave was given two weeks to live. He’s now fighting every day to stay alive to also see the match on Saturday.

Liz said: ‘It was total devastation. Me and Dave moved here for a healthier life, we had always been outdoors, we loved the beaches here and got a beautiful lifestyle.

‘Every test from there on in shown this tumour. Only chemo would prolong his life, but after two sessions his body couldn’t take it.

‘We were told he had two weeks to live, but that was three weeks ago. He’s in pain and fighting to stay alive to watch this game.’

Dave’s friend will also be cycling from Coventry to the New Zealand embassy in London to raise money for both Dave and Liz.

Soccer Aid: Robbie Williams reflects on first match in 2006 We use your sign-up to provide content in ways you’ve

Soccer Aid: Robbie Williams reflects on first match in 2006 We use your sign-up to provide content in ways you’ve