Home » Sport » Life Has Moved On, but Fans in Atlanta Mourn the All-Star Game

ATLANTA — In and around Truist Park in suburban Atlanta on Friday, there were scant clues that Major League Baseball’s 2021 All-Star Game, as of roughly a week ago, was supposed to be held here on July 13.

There were no leftover banners. There were no protests. Only a handful of people wore gear with the game’s logo. And the only booing heard on Friday night — when the Braves played their first home game following M.L.B.’s decision to yank the Midsummer Classic out of Georgia because of a contentious new voting law — was for the visiting Philadelphia Phillies and their outfielder Bryce Harper.

The atmosphere around Truist Park felt almost prepandemic. Two hours before the first pitch, the bars and restaurants in the surrounding streets swarmed with fans. The concession-stand lines during the Braves’ 8-1 win were long. The mandatory masks and social distancing appeared optional. The tomahawk chop, a chant widely viewed as racist, emerged at key junctures in the game.

As for a planned boycott of M.L.B. — as some conservative politicians and fans had threatened — “it doesn’t look like it, does it?” said John Swindler, as he and his soon-to-be-wife, Teri, both 48, surveyed the crowd outside the Braves’ publicly funded stadium.

There was sadness around the stadium over M.L.B. Commissioner Rob Manfred’s choice to move the All-Star Game and accompanying amateur draft to Coors Field in Denver. Many wanted to see the league’s marquee event, which changes its venue yearly, in person. But the key distinction among fans surveyed on Friday was whether or not they agreed with Manfred’s decision.

“I’m very disappointed, but I commend Major League Baseball for stepping up and actually taking it away,” said Swindler, who made a 100-mile trek for the weekend to take in a Braves game. 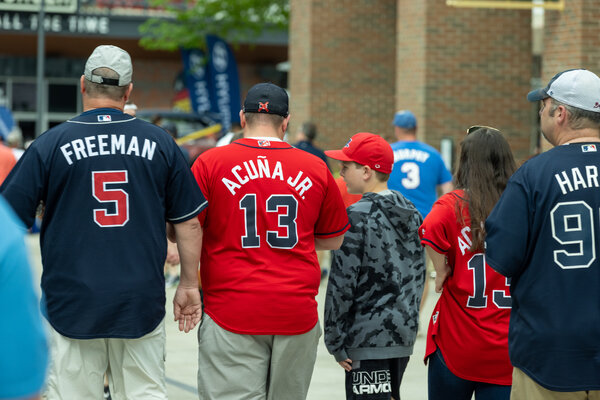 “I know people didn’t want to see it go but you have to stand up,” continued Swindler, who wore an Austin Riley jersey while his fiancée wore a Ronald Acuña Jr. one. “I’m not trying to make it a black-and-white situation, but voting laws are very touchy.”

On March 25, Georgia Gov. Brian Kemp, a Republican, signed a sweeping law to restrict voting access in the state, making it the first major battleground state to overhaul its election system since the turmoil of last year’s presidential contest. Civil rights groups and Democrats, including President Biden, have decried the law — and similar efforts in other Republican-controlled state legislatures — saying it would disproportionately suppress turnout among people of color. Georgia, which flipped Democratic in the presidential and U.S. Senate races, has a large Black population.

After a week of phone calls to owners, executives, and current and former players, Manfred announced on April 2 that pulling out of Georgia for the major events were “the best way to demonstrate our values as a sport.”

Although M.L.B. has been accused of being political for moving the game out of Georgia, the status quo would have been, too. If the game had remained in Georgia — the birthplace of Jackie Robinson and home of Hank Aaron, both deceased Hall of Famers and civil rights champions — M.L.B. players and coaches would have faced questions about whether they would take part or stay away to protest the voting law.

“It’s a hard call,” said Teri Swindler, who passed out snacks and water to voters in line during the last elections, an act now illegal in Georgia. “You’re not going to please everybody.” But once M.L.B. made its choice, she said, it spoke volumes.

Soon after Kemp signed the bill, Sean and Nicole Corona began reading more about the growing calls to move the All-Star Game and talked about it. The couple adopted the Braves when they moved from Los Angeles to Atlanta five years ago. They said they bought Braves’ 2021 season tickets solely because it gave them first dibs on All-Star Game tickets. They were looking forward to seeing it, the Home Run Derby and more.

“We don’t support the voter suppression bills, but honestly if it was any other game, I would’ve been like, ‘Yeah, move it!’” said Sean Corona, 41. But now, he muttered an expletive.

Nicole Corona, 35, said she and her husband don’t hold a grudge against M.L.B. over the game but they did against Georgia for passing the law. Echoing the sentiments of Atlanta’s Democratic mayor, Keisha Lance Bottoms, the Coronas bemoaned the impact on local businesses and the position the region was put in.

“The disappointing thing is not even the game, it’s that it’s reactionary,” Nicole Corona said. “This legislation, yes, it was rushed through. But M.L.B.’s reaction was too late. People, whether it’s Delta or Cola-Cola, coming out to speak about the legislation happened after it had already passed. There’s all this similar legislation that’s being pushed through Republican states across the country. Corporations, athletic organizations and anybody that has a say in those states needs to be proactive, and not reactive about it.”

There were only a few visible signs of anger toward M.L.B. and Manfred on Friday throughout Truist Park and the surrounding area, which is called The Battery Atlanta. A few fans said they spotted a sign in the left-field bleachers of Manfred’s face with a red clown nose. And then there was John and Colleen DeSantis, who both proudly showed off their new T-shirts that read, “We support the Braves not M.L.B.”

John DeSantis, 57, said a friend printed them just in time to wear to the game, and that he might start selling more over the weekend. He said around 1,000 people had asked them about the T-shirts already, and that was an hour before first pitch.

DeSantis said he believed M.L.B.’s reaction was kneejerk, that their view of the Georgia law was wrong and that M.L.B. should stick to baseball. He also cited an already-widespread estimate from a local tourism official that the area will lose out on $100 million in revenue — an unsubstantiated figure disputed by some economists.

DeSantis said he expected to be refunded for his All-Star Game tickets but didn’t want the money back. “I want Atlanta and Truist Park to enjoy the revenue that comes off it and all the hard work that goes into Atlanta,” he said.

He said the Braves’ statement about losing the game — that they were “deeply disappointed” and that businesses, employees and fans in Georgia were “victims” — was part of his motivation to make the T-shirts. He said he planned to keep backing the Braves, but called for hurting M.L.B.’s coffers, such as advertisers pulling their deals with the league or fans to stop using the league’s betting partners.

“M.L.B., enjoy yourself,” DeSantis said shortly before walking off with his wife.

Standing nearby was James Sims, 69, a lifelong Braves fan in a replica Aaron jersey from 1957, the year he won the National League Most Valuable Player Award and led the Milwaukee Braves to a World Series title.

Sims attended the last All-Star Game in Atlanta, in 2000 at Turner Field, and was heartbroken to lose out on what would have been the next, but he stood behind M.L.B.’s reasoning. “The good has to suffer with the bad,” he said.

Sims said Georgia’s Republican lawmakers were retaliating and making it harder to vote, which was discriminatory. Kemp has defended the law, saying it expands access to voting because of an extra required Saturday of early voting, and he denounced criticism as a political game by Democrats.

Among the many who didn’t want the game to leave Atlanta was Andy Ramos, 27, who was born in Puerto Rico but soon became a die-hard Braves fan after moving to Georgia as a child. In 2019, when fans were last allowed into stadiums at normal capacity, Ramos estimated he attended at least 30 Braves games.

Although Ramos didn’t have tickets to the All-Star Game, he wanted to at least experience the week of fan events leading up to the contest. He said he heard bits and pieces of Manfred’s statement about moving the game, but he felt that sports and politics should stay away from each other.

“Now I still have to wait,” Ramos said. The 2022 All-Star Game was already awarded to the Los Angeles Dodgers as makeup for the 2020 game that was canceled by the pandemic. It is unclear when Atlanta may host the game again.

One way to potentially wipe away his All-Star Game blues, Ramos said, and perhaps help replace some lost spending: if the Braves win their first World Series title since 1995 and host home playoff games throughout October.