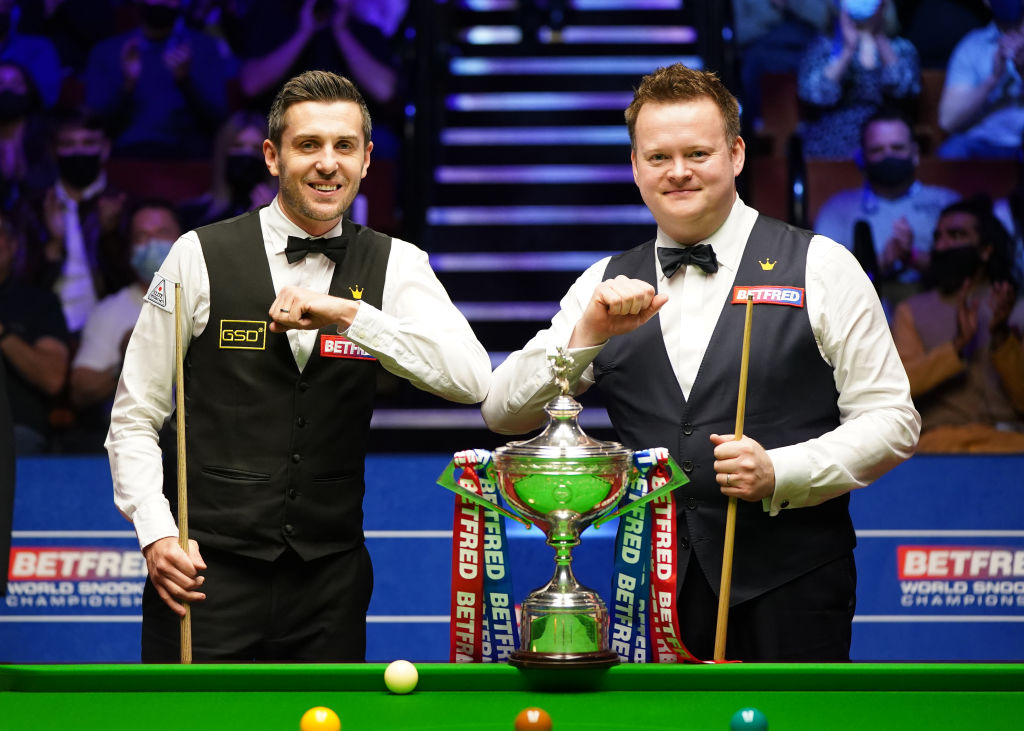 Mark Selby has won a fourth World Snooker Championship title, beating Shaun Murphy 18-15 in an immense display from both men over four sessions at the Crucible.

The Jester from Leicester joins John Higgins on four world titles, with only Stephen Hendry, Ronnie O’Sullivan and Steve Davis ahead of him in the modern era, as he cements himself among the greatest players in history.

The 37-year-old has now won four of the last eight World Championship titles after lifting his first in 2014 and climbs back to number two in the world, looking to hunt down Judd Trump at the top of the rankings.

Murphy competed well throughout the match and was ahead after the first session, but the master match-player got his claws into the Magician in the second session and scrapped his way to a 10-7 lead by the end of Friday with Shaun looking like he had been badly dragged into Swamp Selby.

From there it was very even but Selby never looked in serious danger of relinquishing the lead he had squeezed out of Murphy on Friday evening.

Murphy came into the final session of the contest in a sticky situation, 14-11 behind with Selby needing just four more frames for the title.

Things looked all the more perilous for the Magician when Selby took the opening frame of the session with a 66, but Shaun managed to claim a tight second frame of the evening.

Selby was just relentless, though, and secured the next with a 68 to go two from victory, before Murphy made 58 before the mid-session interval.

The break in play seemed to suit Selby, though, who produced an immense 30th frame, battling through a safety battle which he won and then made a superb break of 120 to go 17-13 ahead.

Things looked dire for the 2005 world champion but his form was yet to desert him as he made a fantastic break of 100 to stay alive in the next and followed it up with another century (103) to make things very interesting indeed.

What turned out to be the final frame of the match was a tense, see-saw affair with both men having chances and it looked like Murphy was going to pinch it before missing a tricky final red with the rest down the cushion.

In stepped Selby to mop up the chance, holding his nerves together and securing victory.

It was Murphy who had the better of the opening stages of the contest, ending the first session 5-3 ahead, but by the end of the second session on Sunday night, his lead had evaporated and it was never to return.

Selby won seven of the nine frames played on Friday night to finish the day 10-7 ahead thanks to some fiendishly tough match-play.

There were five half-centuries from the Jester, but it was more about his granite safety play which ground Murphy down and scrambled his brains, with the Magician forgetting how to cast spells entirely as he fell into Selby’s traps.

That three-frame lead proved enough for Selby to milk for the rest of the match, with Murphy scrapping just to stay in touch rather than look like a genuine contender to go back ahead of his opponent.

Selby was able to just do enough from there on in, sharing the third session 4-4, with both men making their first centuries of the contest as the Jester made 107 and the Magician 100.

Then came the final knockings, which were again quite tight, but Selby knew he was in control and stayed so calm to make his way over the winning line and get his hands on the trophy once again.