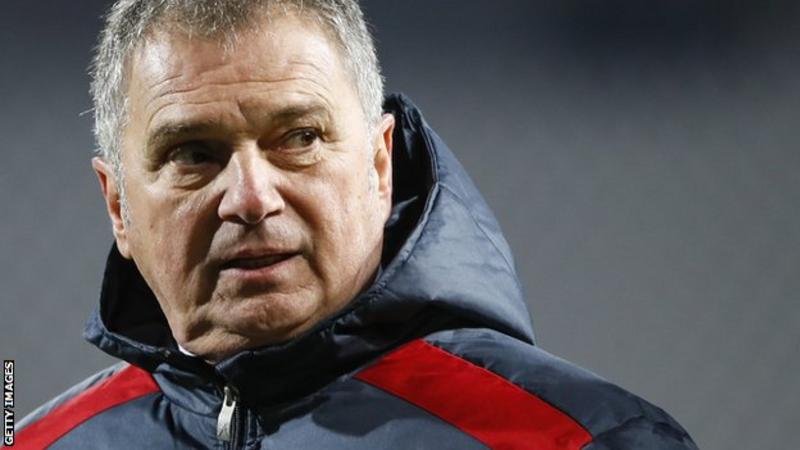 Montenegro have sacked their Serbian manager Ljubisa Tumbakovic for refusing to take charge of his side’s European Championship qualifier against Kosovo.

Tumbakovic, 66, had reportedly come under pressure from the Serbian authorities in Belgrade, which do not recognise the independence of Kosovo.

The Euro 2020 Group A match in Podgorica, which took place behind closed doors as punishment for fans’ racist chanting aimed at England players in March, ended 1-1.

Tumbakovic, who won six league title and three domestic cups over two spells with Partizan in his homeland, had been in charge of Montenegro since January 2016.

An FSCG statement added: “The executive board made a unanimous decision to relieve Tumbakovic of his duties after he decided not to be in charge of the national team for the match.

“Apart from being an unpleasant surprise, Tumbakovic’s move also constitutes a breach of his professional duties stipulated by his contract.”

The federation also said it “regrets” the decisions of Red Star Belgrade duo Stojkovic and Ivanic not to play, blaming “pressure from certain circles”.

“Things which have nothing to do with sports have defeated sports and football on this occasion,” added the FSCG statement.

Kosovo’s population is made up of 90% ethnic Albanians and it declared independence from Serbia in 2008.

It has been recognised by the United States and major European Union (EU) countries.

As well as Serbia, a group of countries including China, Russia and five EU members refuse to recognise Kosovo as an independent nation.

The European Championship qualifying tie against Kosovo was something of a hospital pass for the coach and Montenegro’s two Serbia-born players.

Kosovo and Serbia are kept apart in qualifying competitions.

But players – and coaches – from the respective diasporas represent national sides across Europe.