Is it already the most wonderful time of year again? With LeBron alley-ooping and referees demanding we be of good cheer? There’ll be dunks used for posting, Kawhi laughs for roasting and trash talking out in the snowwwww.

Yes, the N.B.A. season is upon us, beginning Tuesday, with a much different landscape from any other season. Most arenas won’t have fans in the stands because of the pandemic. At the same time, several top stars who missed most or all of last season will be returning, shifting the balance of power in the N.B.A.

And all eyes are on James Harden to see where he ends up, whether he has to stay in Houston for the season or gets sent to one of his preferred destinations, like Milwaukee, Philadelphia or Miami.

The Eastern Conference is wide open this year. Here’s a look at where it stands. 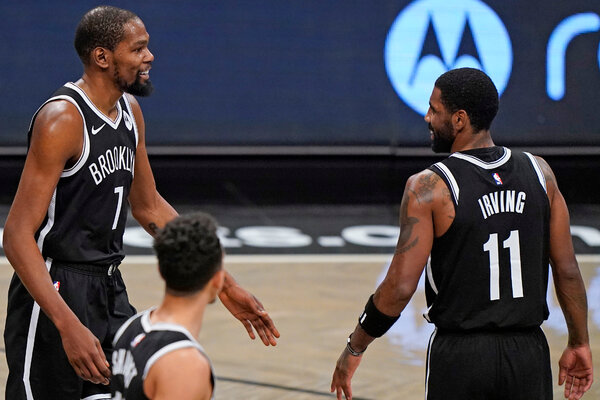 Outlook: On paper, this is the most talented team in the East, if not the league. The only new players this season are key reserves, but the real addition is Kevin Durant, who is ready to play after missing last season with an Achilles’ tendon injury. His friend and fellow perennial All-Star Kyrie Irving also will be returning, from a shoulder injury that limited him to 20 games last season. If they are close to the players they were before their injuries, this team is a threat to win the finals, especially considering its dynamic supporting cast.

The Nets have elite shooting in Shamet and Joe Harris; rebounding and shot-blocking in DeAndre Jordan and Jarrett Allen; quality playmakers in Caris LeVert and Spencer Dinwiddie; and bench sparkplugs like Green and Timothé Luwawu-Cabarrot.

Outlook: The Bucks enter the season without the cloud of whether Giannis Antetokounmpo will sign an extension hanging over Wisconsin. That’s a huge win in itself. But now the focus will be on whether this team will vie for a championship or disappear early in the playoffs again.

Trading for Holiday, a former All-Star, was a great start. Antetokounmpo, Khris Middleton and Holiday are a fearsome trio. The Bucks also revamped their bench, adding Augustin, a veteran who can shoot the ball, to make up for the loss of players like Matthews and Ilyasova. (Side note: Antetokounmpo has the opportunity to become the first player since Larry Bird in 1985-86 to win the Most Valuable Player Award for a third straight season.)

Outlook: After last year’s Cinderella run to the finals, the Heat enter this season with the same team more or less, led by Jimmy Butler, Bam Adebayo and Goran Dragic. You can expect Tyler Herro, who mostly came off the bench last season and delivered many strong performances in the playoffs, to have a bigger role. You do wonder whether Miami will be able to take teams by surprise again, with many teams in the East making significant moves to get better or having players return from injury.

Outlook: Daryl Morey, the new team president, already left his mark on the roster, shipping out the ill-fitting Horford for Green, who will provide Joel Embiid and Ben Simmons some much needed spacing, as will Curry. The team is better balanced than the disappointing one last season, but Embiid and Simmons still must elevate their play. (And let’s not forget: The Sixers are in play to trade for Houston’s James Harden.)

Outlook: This was a bad off-season for the Celtics, who lost Hayward, an All-Star talent, in a free-agency-related trade that netted Boston a record trade exception, which the franchise could use to acquire a solid rotation player. To contend, the Celtics will need Jayson Tatum and Jaylen Brown to make another leap, plus better-than-expected contributions from their stable of young players like Grant Williams, Robert Williams and Romeo Langford, especially given Kemba Walker’s knee troubles.

Outlook: The Hawks are a team primed to make The Leap. Aside from having an elite talent like Trae Young, the team signed several strong veterans to surround a dynamic core that includes John Collins, Clint Capela, Kevin Huerter and Cam Reddish. Melding so many new faces will be difficult, and this team will probably be poor defensively. But Atlanta will be a must-watch on League Pass.

Outlook: Both of the team’s stars — Bradley Beal and Westbrook — will be playing this season with chips on their shoulders: Beal, for being snubbed for All-N.B.A. teams despite his stellar last season and Westbrook for the narrative surrounding his campaign in Houston, despite making an All N.B.A. team. Look for Rui Hachimura to be in the conversation for the Most Improved Player Award after a strong rookie season.

Outlook: The biggest acquisition the Pacers made this off-season was a new coach, Nate Bjorkgren. Aside from that, they’ll have a healthy Victor Oladipo and Domantas Sabonis to build around, as well as Malcolm Brogdon and TJ Warren, who had a great run in the Florida bubble. Hard to see this team making any real noise as the season progresses, though.

Outlook: This might be the toughest team in the East to peg. Pascal Siakam’s stock took a dive after his performance in the playoffs, and replacing Ibaka with the combination of Baynes and Len might not be enough. Kyle Lowry turns 35 this season. Toronto was knocked out of the playoffs in the second round and didn’t upgrade much in talent. Even so, the Raptors are never to be counted out.

Outlook: The only reason to watch this team is to see what kind of player Anthony, drafted 15th over all last month, will be. Otherwise, the team is set up to be average again, especially with Jonathan Isaac likely to miss the year with a knee injury. It’s time for this franchise to start over. Building around Aaron Gordon and Evan Fournier is just not good enough.

Outlook: This team could challenge for the playoffs. Hayward had a great year in Boston last season, and Ball is showing himself to be a talented playmaker during the preseason. Devonte’ Graham (18.2 points a game in his sophomore N.B.A. campaign) is a solid young talent poised for a leap.

Outlook: The Bulls have a new coach, Billy Donovan, who has a penchant for squeezing production out of less-than-stellar rosters. Zach LaVine put up all All-Star numbers (25.5 points a game) last season, but will need more consistent playmaking to actually become one. If the Bulls want to be competitive, they’ll need Lauri Markkanen to recover from a down year.

Outlook: The Knicks, aside from hiring Tom Thibodeau as coach, didn’t make any major moves this off-season, which is fine. They sat out a weak free-agent class and kept their flexibility. Barring any major star trades, this is another development year for the franchise. It’s a chance to determine what exactly RJ Barrett, Kevin Knox and Mitchell Robinson can do. Separately, Toppin may be the most exciting Knicks draft pick in years.

Outlook: It was an odd off-season for Detroit, as the team stocked up on big men who can’t shoot, while trading away talented pieces like Kennard and Wood. But Blake Griffin is healthy, and the franchise is hoping Hayes is ready for big minutes. This is probably not a playoff team right now, but players like Hayes offer hope for the future. Will Griffin be on the team come season’s end?

Outlook: Collin Sexton, going into his third year, is one of the few guaranteed bright spots on the team. He’s a proven scorer. But Andre Drummond and Kevin Love on the frontline are … an interesting pairing. It wouldn’t be shocking to see Cleveland last in the conference again.