As he researched the game, he received a suggestion for his Spanish radio calls: incorporate the established sounds of soccer.

Terms familiar to Mexican soccer broadcasts and the unmistakable call of “gooooooool!” that pervades the sport had already graced the World Cup and just about every other cup competition that exists. The Stanley Cup has joined that list.

The N.H.L. and some of its franchises have made concerted efforts to reach out to Latino audiences. As part of the seven-year rights agreement the Walt Disney Company announced it had signed with the league this month to bring N.H.L. games back to ESPN starting next season, the network will have international media rights in Latin America and the Caribbean. A league spokeswoman said ESPN was expected to make N.H.L. content available on traditional TV as well as on digital and social medial platforms in the region, with more details to come.

Before the 2019-20 season, Alex Meruelo of the Arizona Coyotes, a Cuban-American, became the N.H.L.’s first Latino majority owner. Xavier A. Gutierrez of Mexico later became the league’s first Latino team president with Arizona. The N.H.L. also started a league website in Spanish last season, and three teams — Chicago, Los Angeles and Vegas — regularly broadcast games in Spanish on the radio.

In Los Angeles, the Kings have embarked on a novel partnership. Last year, they expanded the Junior Kings program into Mexico City after starting a Beijing program in 2018. The Kings’ aim is to develop players through high-level training, camps and competitions that seek to close the resources gap between Mexican players and their counterparts elsewhere in North America. 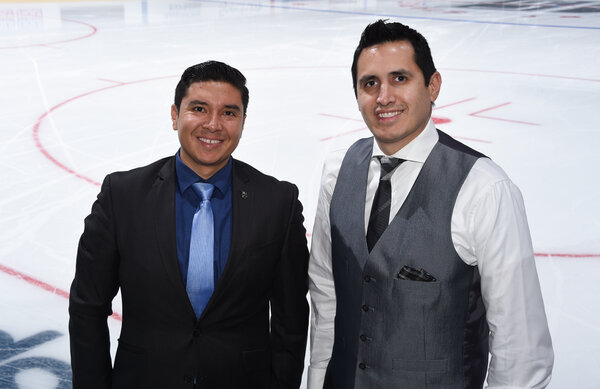 Francisco X. Rivera, a broadcaster from Mexico City who calls Kings games in Spanish, has been heavily involved with the program, which serves boys and girls ages 4 to 18. During the pandemic, he has hosted bilingual video calls with players who compete in a seven-team league with more than 100 participants. Derek Armstrong, a former Kings center who works in the team’s front office, offers instruction during the sessions.

“The ultimate goal would be finding that player, either Mexican-born or Mexican-American, who represents the country well,” Rivera said. “Imagine having that kid from Mexico who was that representative, if he came out of our program. That would be something that no one could take away from you.”

Though Rivera, with his broadcasting partner, Nano Cortés, a Colombian, did just 11 of the Kings’ 34 home games last season — and there will be at least 12 Spanish broadcasts next season — he fulfills numerous roles for the Kings. He has become an adviser to the Kings, as well as an ambassador to Latino communities and celebrities alike. On a given day, his work might include a youth ball hockey clinic or wooing prominent celebrities to appear at games.

This month, he expanded his responsibilities to include being part of the English-language broadcast crew for the Ontario (Calif.) Reign, the Kings’ American Hockey League affiliate, and on March 13 became the first Latino play-by-play announcer to call a professional hockey game in English.

Rivera, 39, who has had nephews who played with the Mexican national team, said that he hoped the Junior Kings’ initiative could further the sport in Mexico, where the national teams have enjoyed modest success at lower levels of international play and the women’s team may even have Olympic aspirations. It could also potentially produce a face for the N.H.L. in Mexico and the rest of Latin America.

The N.B.A. has had stars, such as Manu Ginobili of Argentina and Pau Gasol of Spain, who prospered in Latino-heavy markets like San Antonio and Los Angeles, where Kobe Bryant also took to communicating in Spanish regularly.

But the N.H.L. hasn’t yet featured that type of figure among its player ranks.

The league has had, though, several Hispanic players. Scott Gomez, an American of Mexican and Colombian descent, starred for the Devils in the 2000s. Bill Guerin, the former Devils wing and current Minnesota Wild general manager, is of Nicaraguan and Irish descent. The former Rangers goalie Al Montoya is a fluent Spanish speaker with Cuban heritage and frequently appeared on Spanish radio when he played for the Florida Panthers.

The league currently has players with Mexican roots like Vegas left wing Max Pacioretty, who played on the 2014 U.S. Olympic team, and Toronto Maple Leafs center Auston Matthews, a top goal-scorer selected No. 1 over all in 2016.

Despite several teams being in markets with significant Latino populations, there has been a hesitancy to commit fully to Spanish broadcasts.

In South Florida, the Panthers dabbled in Spanish broadcasts on the radio during their first three seasons starting in 1993, while they played in Miami, and again in the middle of the 2010s.

The Kings’ wading into Spanish broadcasting three years ago came on the heels of the ephemeral venture that was Spectrum Deportes, a mirror of the regional English-language cable network that carried the Lakers and the Dodgers before being canceled in 2018 after six years.

The Kings’ radio coverage is more limited in scope than it was on Spectrum Deportes, as well as its 1990s predecessor, La Cadena Deportiva, a network that carried the Lakers, San Diego Padres, Kings and Anaheim Ducks among its other sports telecasts in Spanish in the 1990s.

The Kings also had Spanish radio broadcasts that ended in the 1997-98 season.

“Some of them do it as a P.R. stunt, doing two games here or three games there. But it doesn’t really go anywhere because they don’t support it financially and don’t give it the time,” said Cesar Sutil, a producer for La Cadena Deportiva during its two seasons (1993-94 and 1994-95) broadcasting the entire home schedules for the Kings and Ducks.

Though the Kings did not use their success last decade to diversify their programming — they won championships in 2012 and 2014, but did not begin Spanish broadcasts until 2018 — the Chicago Blackhawks did. For the past six seasons, their presence in Spanish-language media and the Latino community has grown. They now broadcast all of their home games on Spanish radio.

Héctor Lozano, 52, a former Chicago play-by-play announcer, had also worked with other Chicago franchises, including the Bulls during the Michael Jordan era, and said that he had seen a major uptick in enthusiasm for hockey in Chicago’s Latino community.

Vegas had shown a commitment to reaching Spanish-speaking audiences from the outset, having had community outreach and radio broadcasts since its inaugural season in 2017-18. The Golden Knights now broadcast all home games and all playoff games on Spanish radio and provide the option to hear the Spanish audio feed on the English telecast via the S.A.P. function. They reach seven states, including many areas with significant Latino populations. They also feature separate Spanish accounts on Instagram and Twitter.

The team owner William P. Foley, who learned Spanish when he spent three years in Venezuela during his adolescence, said very early on that he wanted to integrate the Latino community into the organization and bring them hockey in Spanish.

Michael Nijjar, a minority owner of the team, competed for the Colombian national team. He said he would like to bring the LATAM Cup, an international tournament with teams from Latin America and the Caribbean, to Las Vegas, where they have striven to connect with Latino communities.

“I’ve had to get in some companies’ faces because of a lack of sincerity and trying to check a box; I just don’t play that game,” said Peter Guzman, the president of the Las Vegas Latin Chamber of Commerce. “I can tell you wholeheartedly that there has not been a moment like that.”

In 2018, the Golden Knights became the first team to broadcast Stanley Cup finals games in Spanish, with López on the call.

López, 52, who is from Guadalajara, Mexico, said it was difficult to find examples of hockey broadcasts in Spanish when he set out to develop his style. He found inspiration in a 1945 Disney animated short film called “Hockey Homicide.” He felt the narration captured the spirit of the sport and implemented it into his approach.

“Every sport has its soul, but the soul of hockey is different from anything else,” López said in Spanish. “It’s an artistic sport that can become extremely rough.”

López offers listeners descriptions of action in the “circle of dispute” (face-off circle) and his vivid characterization of slashing that translates to “he whipped him with his cane!”

Of course, all three play-by-play maestros use the indelible goal call in full throat.

“We’re always going to give our best because this has become like my child. I love him, I want to guide him and do something beautiful with his life,” López said in Spanish. “To bring something that pleases the people to my community has been an honor, a challenge. But a great honor.”