The injured Nets star Kevin Durant has been missing since mid-February, but his team got some good news on Monday with the return of James Harden, who had missed Brooklyn’s last two games with a hamstring injury.

When the injury flared up again, he asked to come out. That left the Nets in a serious bind against the Knicks at Barclays Center, their Big Three reduced to a lonely one.

James Harden, Nets say, is out for the rest of tonight’s game against the Knicks with right hamstring tightness.

Step forward, Kyrie Irving. The third member of the Nets’ star triumvirate poured in 40 points with a blend of speed, strength and deep 3-pointers, as the Nets — short-handed as they have been for much of the season — beat the Knicks, 114-112.

Irving shot 15 of 28 from the field, made five 3-pointers and also led his team with seven assists. Jeff Green added 23 points, tying his season high, but was merely a supporting player in Irving’s impressive performance.

Irving’s final basket was a long 3-pointer that extended the Nets’ lead to 5 points with a minute left.

After the Knicks rallied to tie the score at 112-112, Green drew a foul with three seconds left and hit both free throws. Julius Randle, who had a triple-double for the Knicks, missed a driving jumper to tie it as time expired.

“This is the Brooklyn way, also mixed with a little Jersey swag,” Irving said in an on-court interview after the game, to the cheers of the pandemic-limited crowd of 1,700. He went to high school in Elizabeth, N.J., before spending his only college season at Duke.

Harden had started the game but asked out early after pulling up in front of the scorer’s table and reaching for his hamstring. Coach Steve Nash quickly removed him.

His cameo ended without a point, bringing to an end his 450-game streak of scoring in double digits. (LeBron James continues to lead that category with more than 1,000.)

“Very similar to last time,” Nash said of Harden’s injury. “He has an awareness of something’s not right in his hammy. His scan was clean. His strength tests when he came back to the locker room were normal. It’s something where we have to protect him, we have to trust him. Very frustrating for James, but we can’t risk it, if we can afford not to.”

Nash held out hope that Monday was merely a brief delay in Harden’s recovery, and not something that could imperil the championship dreams of the first-place Nets (35-16).

“Who knows?” Nash said. This may linger or it may be all be behind us, like we thought it was before the game.” 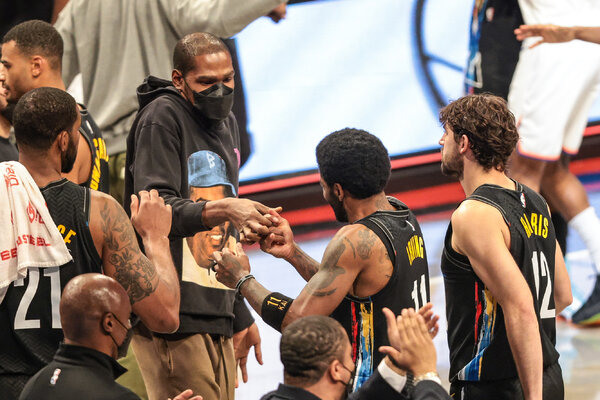 Harden remains a most valuable player candidate, scoring 25 points a game and leading the league in assists (10.9 per game) and minutes (37.1).

With a third straight win over the Knicks, the Nets completed a season sweep of their rivals for the first time since 2014-15.

Durant, who has his own hamstring injury, shot around before the game, and the Nets said they were hopeful he would return soon. Durant, Harden and Irving have played together only seven times since joining the Nets, making it all the more remarkable that the team leads the Eastern Conference.

Randle’s triple-double — 19 points, 15 rebounds, 12 assists — was his fourth of the season. The Knicks are hanging on to the eighth spot in the Eastern Conference, on track for their first playoff appearance since 2012-13.