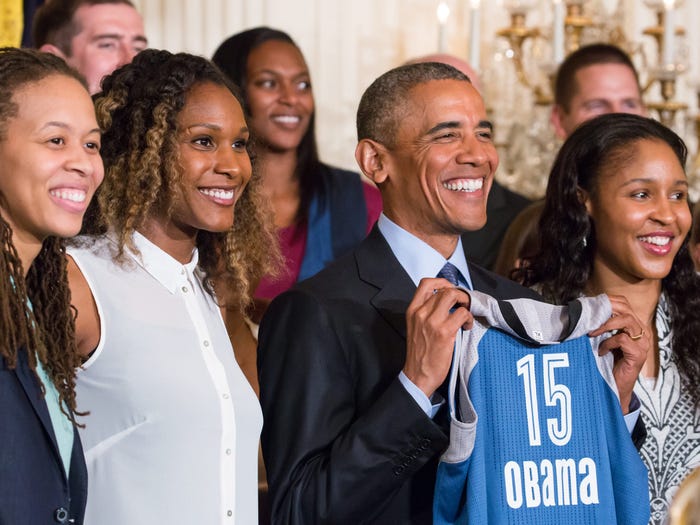 2020 was a remarkable year at the intersection of sports and activism, and women spearheaded the movement towards social justice.

And the 44th President of the United States "wasn't surprised" that female athletes led the way.

In a conversation with Bill Simmons and Bakari Sellers on a recent episode of "The Bill Simmons Podcast," former President Barack Obama said, "that women generally are superior to men, and women athletes are no different." It follows, then, that WNBA players have long been using their platforms to organize, inform, and exact impactful change.

"It was interesting — there was such a contrast when you had the men's teams, championship teams, come and then the women's teams come," Obama recalled from his years hosting champions at the White House. "The guys were all nice, but a lot of them would just kind of mumble, the same way that all of us probably did if we were 21 or 22 and showed up at the White House. And the women, they would be articulate and engaged and ask these policy questions."

Obama also lauded Maya Moore for her considerable work in the realms of social and racial justice. A four-time WNBA Champion and six-time All-Star, Moore stepped away from the game at the peak of her career to help free a prisoner who she believes was wrongfully convicted of burglary and assault.

Thanks in large part to Moore's efforts, a judge overturned Jonathan Irons' conviction, enabling the 40-year-old to walk free for the first time in 23 years in July. Obama acknowledged that Moore had paved the way for other athletes who are interested in social justice activism.

"Look at somebody like Maya Moore — who I've known for quite some time because my first year [as president] she came as a Connecticut champion," Obama said. "Her investment to the degree where she actually left basketball because she cared so deeply about it was impressive and not surprising."

"And it's an example of where a law really did make a difference."

That law, according to the two-term president, is Title IX.

"Title IX really changed the landscape for sports," he said. "And those of us who have daughters can see how valuable it is to have women have the same opportunities to compete and excel on the field or on the court, the confidence it gives them, and their ability to then translate that success later in life."

Obama admitted that he is "old enough to remember" the Battle of the Sexes between a 55-year-old Bobby Riggs tennis superstar Billie Jean King in her prime. He recalled that people were shocked by King's victory and said he's encouraged by the strides made in women's sports since then.

"The idea that an obviously superior female athlete would beat an old guy was somehow shocking to people," Obama said. "To see that change that's happened is all for the better."

You can listen to the full episode of "The Bill Simmons Podcast" below: