THE OPEN returns to Northern Ireland for the first time in almost 70 years – and all the game's best are desperate for glory.

Below, you can view the live leaderboard, watch video highlights and follow all the action in the rolling blog. To follow the live blog click on 'Live Text' below.

American Ryder Cup star JB Holmes led after the first round, with a 66.

Ireland’s Shane Lowry was a shot back, with a four-under-par 67.

This downhill hole can be just about reachable in one for the longest hitters if they get favourable conditions with the wind behind.

They will need a lucky bounce, though, with the many humps and bumps in the fairway prone to kicking the ball offline.

The rough is also particularly thick here, with the beach and sea over the back of the green all too eager to gobble up any approach hit slightly long. Be brave. But don't be stupid.

This typically plays as the hardest of all the par 3s and during the Irish Open in 2012 was the third toughest hole on the course.

The huge, pear-shaped green with mounds and swales galore demands pinpoint accuracy from the tee, especially if the hole is placed right at the back, where the putting surface sucks in dramatically.

There is not one bunker on this hole and players will be delighted to walk off with par on all four days.

Traditionally this hole is the toughest at Portrush and is a right to left dog-leg with the front of the green protected by a big mound on the left.

Interestingly, entry to the tee box will be via a newly constructed tunnel, which should create an electric atmosphere as players bid for the Claret Jug on Sunday.

Competitors will need to control their adrenaline as well as their shots if they want to walk off this hole – which used to be played as a par 5 – without suffering disaster. 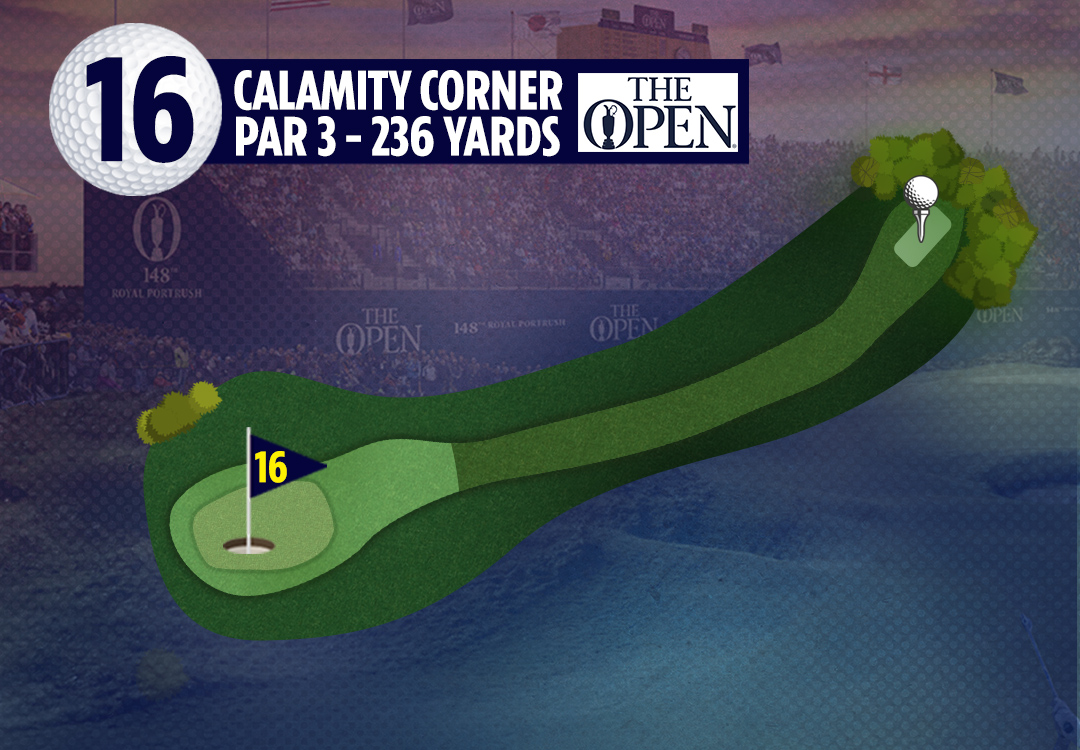 Picture the scene: you lead the Open by one shot with three holes to go. The game's top players are breathing down your neck. You pray for an easy finish… then you're greeted by this brute of a par 3.

The average score in 2012 was 3.19 even though the green itself is a massive target.

In 1951, when the Open was last played at Portrush, the legendary Bobby Locke purposely played short left of the green and chipped up each time, rather than going right and into certain danger.

He made par each time and, though unconventional, that could be the best way to tackle this hole.

With the approach and green surrounded by the massive grandstand, the 18th, which usually plays as one of the toughest holes on the course, provides a dramatic setting for what is sure to be a pressure-packed finish.

Go strong off the tee and you have a shorter iron left in – but you need to avoid the two bunkers and deep rough.

Protecting a lead? Then you can lay up further back to the wider landing area but be left with a long iron in which you more than likely will need to run up the severely undulating apron just short of the putting surface.

Five to watch at The Open

Victorious in the Irish Open just two weeks ago, the Spaniard has shown a real love for the links having won the same event in foul conditions two years before.

The 24-year-old Spaniard looks ready to finally add a Major to his collection and knows he has the game after taking down Masters champ Tiger Woods in the singles at last year's Ryder Cup.

It is now impossible to ignore the 25-year-old American with the weird name.

He is 11th in the world, always seems to fly in under the radar meaning decent odds and this year his worst finish in a Major is tied-16th at the USPGA. Oh, and he was runner-up at last year's Open.

American was recently told off by his grandmother for not paying a caddie his fair amount after a win… but Kooch is a money-making machine and always there or thereabout.

He shared the first-round lead with a 63 at last week's Scottish Open and has the game to contend on a links having finished runner-up to Jordan Spieth at Birkdale in 2017.

British hero has been desperate to live up to the billing in his home Open since he worse those Union Jack trousers.

But the truth is now, on a course which favours supreme distance control with the second shot and a fine touch around the greens, he may finally have met his match.

Don't feel guilty if you have never heard of this under-the-radar South African.

He is little known but has serious game, highlighted by a T14th finish last week (five shots off the lead) and T17th finish in this event last year before a T8 finish in May's USPGA. Decent each way claims.