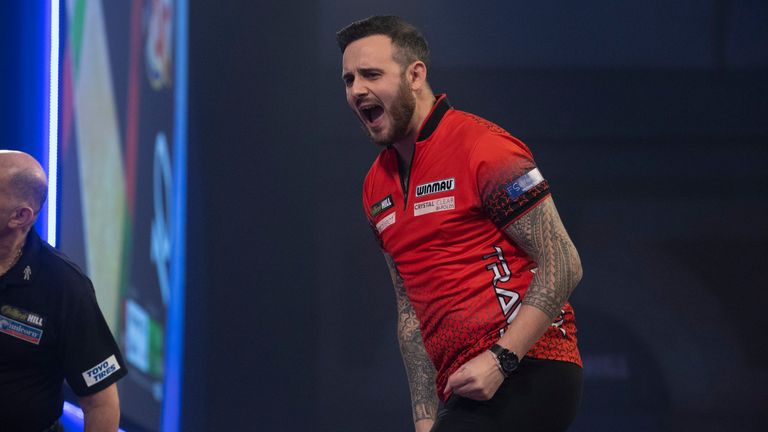 Joe Cullen overcame the in-form Jonny Clayton to pick up the first Players Championship title of 2021, defeating the recently-crowned Masters champion 8-7 in the final on Thursday.

The duo met on the oche for the first time since their World Championship showdown in December, when Cullen prevailed in a deciding leg.

Joe Cullen beats Jonny Clayton 8-7 in the final of Players Championship One to kick off the PDC Super Series!

Back-to-back for the Rockstar ✨ pic.twitter.com/Hpr3wjEMbg

In the interim, the Ferret had sealed the last Premier League spot, by virtue of his maiden major triumph. But it was the Rockstar who came out on top in the meeting of the two close friends. Cullen enjoyed an impressive day at the office, beating Ryan Meikle, Ryan Murray, Scott Waites, Chris Dobey, Gabriel Clemens and Nathan Aspinall.

The final went down to a deciding leg, but the Welshman failed to muster a significant challenge against the throw, as Cullen held to take the title. It was a day to forget for world number one Gerwyn Price, who was beaten 6-2 by Gary Anderson in a repeat of the World Championship final, at the second round stage.

Michael van Gerwen also failed to go deep into the tournament. The Green Machine enjoyed impressive victories over Matthew Edgar and Mark McGeeney, but fell to young Welshman Lewis Williams, who enjoyed a strong outing for his first competition as a PDC Tour Card holder.

Keane Barry was another player in his debut year as a full member of the Pro Tour to impress, as the Irishman beat Premier League champ Glen Durrant en route to the last 16.

A dream debut on the ProTour for Lewis Williams!

The young Welshman has beaten Michael van Gerwen 6-5 to reach the Last 16, in his first ever event as a Tour Card holder pic.twitter.com/PIq6qCayr0

The day started with a bang, with Michael Smith hitting a nine-darter in his first round win over Geert De Vos. José de Sousa and Dave Chisnall also laid down early markers, with averages of 110 and 108 respectively.

Michael Smith landed a nine-dart leg in his opening round 6-3 victory over Geert De Vos pic.twitter.com/cGeunYMTv6

Thursday’s action was the first of four consecutive days play as the new PDC gets underway in earnest following the successful conclusion of Qualifying School last year that confirmed the 128 Tour Card holder for the year.

The UK Open is scheduled to take place in Milton Keynes, starting on Thursday March 7, while the Premier League will begin with the first nine nights behind closed doors as the PDC hope to get the green light for fans to return to arenas later in the year.

Raymond van Barneveld’s return to the PDC was a difficult one, as he was drawn against Stephen Bunting in the first round. The Bullet raced into a 5-1 lead, picking right up from where he left off in the Alexandra Palace. However, the five-time world champ came roaring back to force a deciding leg.

Nonetheless, the St Helens thrower got over the line, with an impressive 12-dart hold in the final leg.

The Flying Scotsman will be pleased with his standards on the opening day. The two-time world champ enjoyed three impressive wins over Peter Jacque (averaging 99), Gerwyn Price (101) and Ryan Searle (110), before eventually succumbing to Rob Cross in the last 16.

Voltage, in turn, fell to Aspinall in the next game, but he will be encouraged heading into the coming days, having hit a 109 average in a 6-1 win over Daryl Gurney.

Watch live coverage of the 2021 Premier League on Sky Sports, the action gets underway on Monday April 5 with five consecutive nights of action from the Marshall Arena, Milton Keynes