Rob Cross joined Glen Durrant in being eliminated from this year’s Premier League Darts after defeat to Nathan Aspinall, while Michael van Gerwen fired an ominous warning that he might be about to return to his very best.

After reigning champion Duzza was eliminated on Tuesday night, Cross was left on the brink after his defeat to The Asp in the opening match of the night. And his elimination was confirmed when James Wade and Peter Wright picked up victories to leave Cross three points adrift with just one game to play.

While elimination was confirmed with a night to spare the battle at the top end of the table intensified with Van Gerwen and Dimitri Van den Bergh joining Aspinall in winning – MvG in particular serving up a thrilling display to beat Jose de Sousa.

Overall just four points separate eighth-placed Jonny Clayton from top of the table Van den Bergh while all four players outside the play-offs spots are just one point away from Wade in fourth spot.

Voltage drops out of Premier League

With his place in the second stage of the competition at stake, Rob Cross slipped to an agonising 7-5 defeat to Nathan Aspinall that left him relegated from the Premier League after events later in the evening.

Cross started fast, a classy 13-darter giving him the lead and the pair shared the next two as Voltage kept his nose in front. But from 2-1 down, Aspinall went through the gears to lead 6-2, a sparkling 146 giving him the advantage for the first time and he did not look back.

An 11-dart leg secured a point for Aspinall, but proved the catalyst for a Cross’ comeback which yielded three legs on the bounce before The Asp finally crossed the line to top the table until Van den Bergh’s victory.

Voltage was eliminated after the first stage last year and needed favours from the remainder of the fixtures but first Wade and then Wright got the results they needed to leave Cross too far adrift in the table. 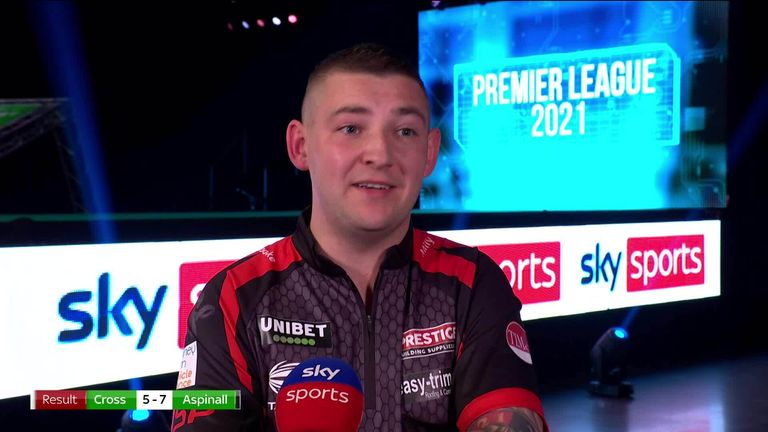 Michael van Gerwen was back to his trademark fist-pumping, high-scoring, roaring best as he beat Jose de Sousa 7-4 to move up to second in the Premier League table. 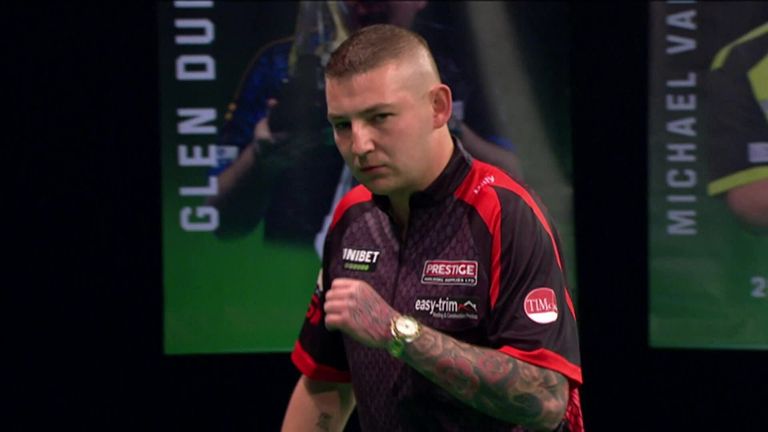 The Dutchman has been inconsistent across the first seven nights but is now unbeaten in four matches as he produced his best performance so far to average almost 105, fire in seven 180s and quell a considerable threat from The Special One.

There was little between the pair across the first five legs, as clinical finishing and maximum 180s peppered the early exchanges – MVG’s brilliant 125 finish on the bullseye the highlight of a blistering start. De Sousa matched the Dutchman throughout, underlining the form that has taken him to three successive wins but the match swung in the sixth leg when De Sousa missed three for a level match and MVG – needing all three darts – finally pinned double 11 for a 4-2 advantage.

An 11-dart leg took Van Gerwen to within one leg of a point and while De Sousa stopped the rot after MVG missed three for a draw, it only delayed the inevitable as the Dutchman won the ninth to ensure he would not be beaten.

Dimitri Van den Bergh maintained his position at the top of the table with a 7-5 victory over Gary Anderson, a match that featured an astonishing 46 missed darts at double. 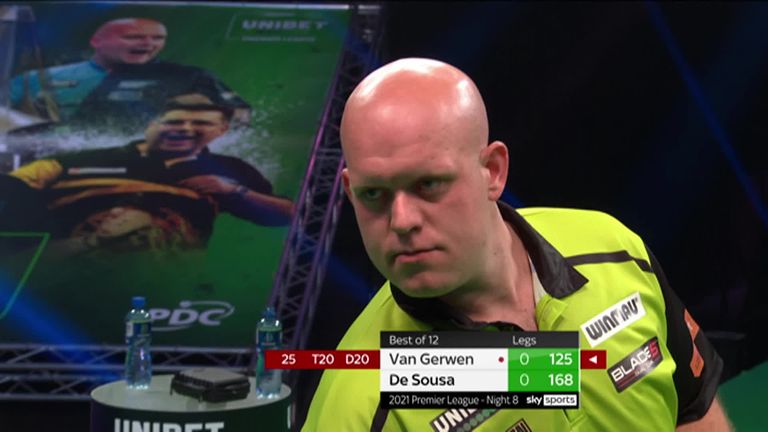 The drama of the latter stages, when both men were frittering away chances, looked a million miles away when Van den Bergh – already 3-1 in front, went eight darts of the way toward a perfect leg.

He missed double 18 for the nine-darter but pinned the same target to lead by three before double trouble struck. Anderson closed to within one when he mopped up 77 for the seventh leg, but Van den Bergh re-established his advantage when the Scot missed darts to level. But Anderson was not to be denied, as 14- and 12-dart legs did eventually draw him level.

With a point on the cards, both men managed to miss darts for the leg before Van den Bergh took advantage of Anderson five missed arrows at the outer ring to ensure he would not be beaten.

Anderson missed four more in the decider to take his tally to 22 missed doubles and hand Van den Bergh the opportunity for his third successive victory despite 26 missed darts at double himself.

James Wade jumped above Jonny Clayton and into the play-off places with a brilliant display to beat the Ferret 7-2. The Machine started with a 13-dart leg, and followed up with an 11-dart break of throw via a 42 finish that left Clayton, who started the second week of competition on top of the table, playing catch-up from the off.

The Welshman finally got on the board when he was 3-0 down, but Wade was doing enough to keep him at arm’s length as the pair shared the next four legs to leave The Machine just two legs away from the winning post.

Wade’s brilliant 101 finish secured his point and a superb 12-dart leg wrapped up a comprehensive victory that moves him into contention for a second Premier League title and Clayton without a win in three.

Peter Wright knew he needed a victory to avoid going into Judgement Night in a battle to avoid elimination, but he delivered a professional performance to beat Glen Durrant 7-1 in the final match of the night. 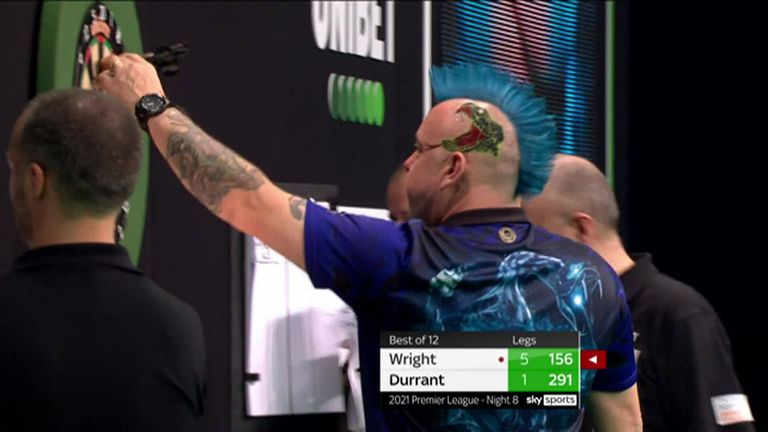 Duzza has endured a terrible defence of the title he won in Coventry last year, but there was little to cheer him bar a 121 finish that left him shocked given his own struggles. By that stage Snakebite had already opened up a 3-0 advantage and despite Durrant’s fine finish there was no further hint of heroics from the defending champion. 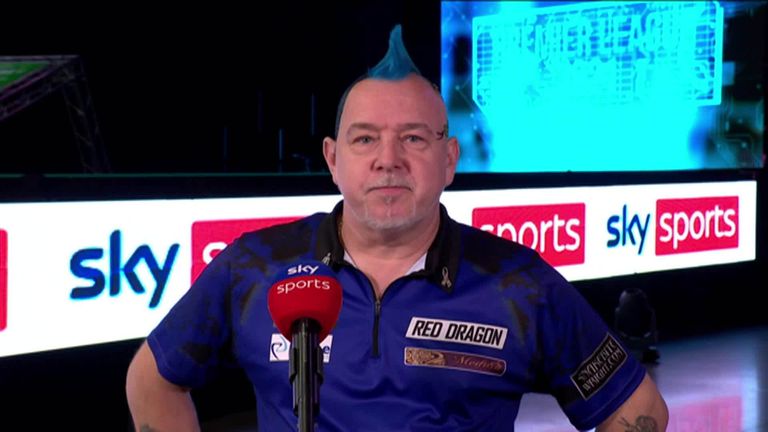 Wright claimed the two points he needed in clinical fashion, a brilliant 156 finish gave him a point and a 6-1 lead, and he claimed the maximum on offer when he pinned double top to ensure he was safe, Cross was relegated and Durrant suffered an eighth defeat from eight matches.

Don’t miss an arrow as Premier League Darts continues on Wednesday from 7pm on Sky Sports Action – and stick with us through the week for updates, interviews and reaction from the start of this year’s competition