Rashid Khan took 3-16 and Dawid Malan struck 52 as Trent Rockets defeated Manchester Originals by seven wickets to all but seal a place in The Hundred Eliminator.

STORY OF THE MATCH

Trent Rockets must have been bracing themselves to chase a stiff target after the Originals rattled up 70-1 from their first 40 deliveries, with Joe Clarke hitting 27 from 17 balls and Colin Munro 45 from 22.

But Rashid Khan turned the tide as he triggered a flood of middle-order wickets, finishing with figures of 3-16 from 20 balls to restrict the visitors to 135-8, a more modest total than anticipated.

Munro stood tall amid the collapse, hitting the third of his sixes before he chopped on to Marchant de Lange and it needed some late blows from Tom Hartley and Lockie Ferguson to ensure Manchester had something to bowl at.

The Rockets appeared to be cruising to their target as openers Dawid Malan (52 from 46) and Alex Hales put on 50, reaching that landmark when Hales slog-swept Matt Parkinson’s first ball to the boundary.

The next lured Hales out of his ground for Phil Salt to take off the bails and Parkinson, who registered figures of 2-21, gave the Originals renewed hope by having Steven Mullaney (17 from 10) caught in the deep.

But Malan looked assured throughout, timing the ball superbly as he notched his third Hundred half-century and shared a stand of exactly 50 with Samit Patel, who bludgeoned an unbeaten 35 off 23 to see the Rockets home with five deliveries unused.

Manchester Originals had been ticking along nicely – but Rashid Khan’s introduction immediately tilted momentum in the Rockets’ favour as he captured three wickets in the space of six deliveries.

Phil Salt obligingly swept the spinner’s first ball into the hands of backward square leg and his trickery then bamboozled both Colin Ackermann and Carlos Brathwaite as the visitors collapsed to 75-5 in the blink of an eye.

Rashid also underlined his worth in the field, running in to take catches to dismiss Tom Lammonby and Ferguson – the latter an absolute skier that took a full six seconds to come down.

There’s nothing like setting the right example as captain – and Lewis Gregory did just that with an astonishing direct hit to run out Dan Douthwaite and keep the Originals under the pump.

Douthwaite, making his Hundred debut, fancied his chances of scrambling a single to mid-off but he had reckoned without the Rockets skipper, diving forward before unleashing a pinpoint throw to take down the stumps and leave the batter stranded.

Munro deserves a mention for his clean strike to dispatch Marchant de Lange high over the long-on boundary, even though the bowler took his revenge by picking up the left-hander’s wicket with his very next delivery.

Target 136 to beat #ManchesterOriginals and qualify in #TheHundred

For timing and placement, however, it’s hard to look beyond Malan’s sweetly-struck cover drive off Ackermann, which bisected the fielders perfectly and ensured the ball would hurtle over the rope.

Tom Moores is evidently a brave man, keeping wicket to Rockets’ team-mate Marchant de Lange without so much as a helmet – and he took a painful blow for his troubles during the South African speedster’s first set.

Please use Chrome browser for a more accessible video player 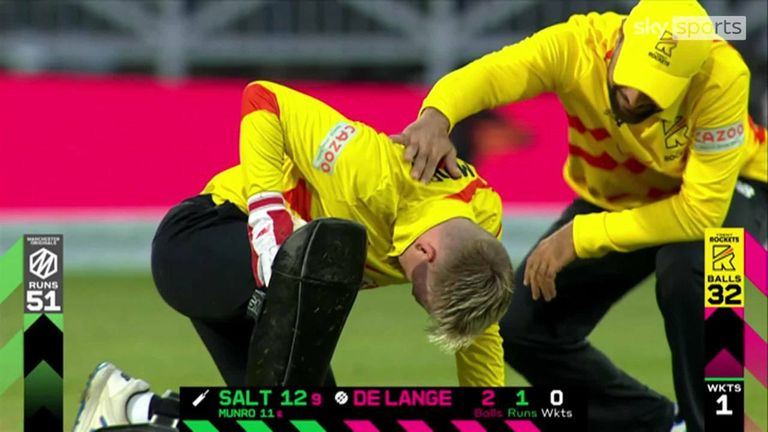 It wasn’t a bouncer that was responsible, though, quite the reverse. De Lange’s 90mph attempted yorker to Colin Munro whizzed along the ground and slammed into Moores’ exposed knee as he crouched to take the ball, prompting an audible yelp.

Plenty of wincing followed and it was little surprise when the keeper signalled for a helmet to be brought on shortly afterwards.

Southern Brave have already secured their place in the women’s final, while Oval Invincibles are desperate to join them – and a win in their final group clash at the Ageas Bowl would ensure a home tie in the Eliminator.

Either Brave or Invincibles will clinch an Eliminator spot with victory, starting at 7pm – on Sky Sports The Hundred and Main Event.

Watch The Hundred live on Sky Sports between now and August 21.