For more than a year, Dawn Staley, the women’s basketball coach at South Carolina, has had a hollowed-out plan for a familiar challenge. As always, she wanted to construct one of the country’s most dazzling rosters; as never before, she had to finish the wooing and scrutinizing of players mainly through texting and calling, FaceTiming and Zooming.

But this Tuesday, one of Staley’s favored strategies — the face-to-face meeting — will at last be available once more.

“I like sitting in front of people,” said Staley, whose dog, Champ, had sometimes seemed to wonder why she was home so often during the coronavirus pandemic. “I’m a look, sound, feel person.”

The resumption of meetings between coaches, prospects and parents — the sessions in homes, church pews, high school gyms and campus offices where sports dynasties can be born and sustained — will amount to one of the most far-reaching lurches toward normalcy in college sports since the coronavirus took hold in the United States. Although the N.C.A.A. and its member schools have gingerly staged thousands of games and practices, in-person recruiting has been forbidden in the name of public health since March 13, 2020, the day after the association canceled its men’s and women’s basketball tournaments and championship events in other sports. 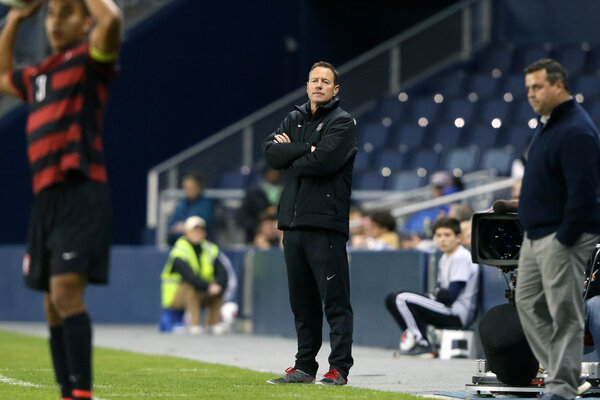 Coaches have been allowed to call and write to prospects and their parents during what is known in college sports circles as a “dead period,” but they have been barred from meeting with them, attending games or visiting high schools.

“For me, personally, and the recruits that we talk to, we’re desperate to be meeting face-to-face,” said Jeremy Gunn, Stanford’s men’s soccer coach, who has spent months calling potential players as he walked around the field. “You’re going to have an interaction with another person, and that person is going to want to assimilate into the world that you have created. That isn’t as possible via technology.”

Although normal recruiting calendars are resuming Tuesday, the landscape is vastly different from the one coaches abruptly retreated from last year in Division I, which includes the most prominent conferences in college athletics. Thousands of students are looking to use an additional year of athletic eligibility that the N.C.A.A. granted because of the pandemic. Transfer portals have exploded with players looking for different schools. New state laws — and, potentially, new N.C.A.A. rules — governing how players may profit off their fame are expected to take hold this summer. And the vibes of meetings and visits may quickly change.

“Sometimes, people come to campus and it’s like pulling teeth to get them to engage,” said Staley, who was among the coaches who said it had been easier to get recruits — bored, isolated, their schedules stripped down — to return calls while they were more restricted by the pandemic. “I think it will be the opposite where they’re going to engage, we’re going to engage, and it’s going to be shared time where we engage each other and it won’t be one-sided.”

Some prospects are poised to barnstorm schools once the dead period lifts, seemingly as determined as their suitors to make up for lost time. Players may sign for the 2021-22 school year in most sports until Aug. 1, and many recruits for future years are looking toward the early signing periods that have become increasingly popular and start as soon as November 2021.

Like coaches, players and their parents have said that trips to campuses are particularly crucial to settling their plans.

“They matter a lot because I won’t be narrowing any schools down or making a decision until I take my visits,” said Jazian Gortman, a point guard from South Carolina who is among the country’s most sought-after men's basketball players.

“I can see how the environment is, the campus, the locker rooms, the gym,” said Gortman, who expects to visit roughly a half-dozen schools in the coming weeks. “I can meet some of the trainers, I can get to know even more about the coaches and how they coach.”

Of course, some elements of pandemic-era recruiting, like video calls, will likely linger, particularly because this generation of prospects has grown up enveloped by technology. Dain Blanton, the beach volleyball coach at Southern California, said picking the right medium for a pitch might just be the newest challenge to “the art of the coach finding out as much information about the recruit as possible.”

Similarly, coaches, many of them eager to declare that they have been vaccinated, know they may face months of navigating a thicket of health rules imposed by their schools, as well as local governments, states and recruits’ families, even as the pandemic ebbs.

To Dennis, Tuesday is a marker in what she has taken to describing as “the semi-post pandemic,” a time when recruiting may involve more logistical hurdles than it has in the past, posing challenges for coaches racing to win over prospects. Coaches are also preparing for disruptions going forward if the country sees a surge in cases.

But in the meantime, many of them are most eager to see students compete live. “It’s much, much harder to evaluate the sport via video,” said Gunn, the Stanford men’s soccer coach.

Staley, with a trace of sadness, said simply, “We’ve been reduced to buying streaming services to see them play.”

But particularly in sports where summertime competitions are fixtures, the weeks ahead seem to promise a hint of familiarity — and perhaps, thanks to rejiggered schedules around state championships, more games than there’d usually be.

“Summers for us are huge,” said Cathy Reese, the women’s lacrosse coach at Maryland. “We’ll be able to go out and support our 2022s this summer, reset and watch the ’23s.”

It may take years, though, for the recruiting life cycles to excise the remnants of the pandemic. There are already some worries about how a health-related restriction in one place, like a prohibition on campus visitors, might give a different school in another location an advantage in its efforts to attract recruits.

“Kids are going to go where there’s opportunities to go and that kind of opens up the possibilities at different places,” said Reese, whose oldest son, a lacrosse standout, has been going though the college search process. (He has verbally committed to Maryland, where both of his parents played, and is expected to sign in November.)

But the reality that many students made choices with more limited information than usual could fuel, coaches predicted, an increased number of transfers in the next year or two. That movement could again reshuffle recruiting strategies.

At least then, coaches said with a mix of ruefulness and hopefulness, campus visits will be common for prospects.

“They want to experience the culture of the campus, of the community, and when they can’t do that, the only thing they have to go on is the coach,” Dennis said. “Kids don’t want to talk to coaches all the time.”