Home » Sport » Russell Westbrook reportedly wants a trade out of Houston, and the market looks bare 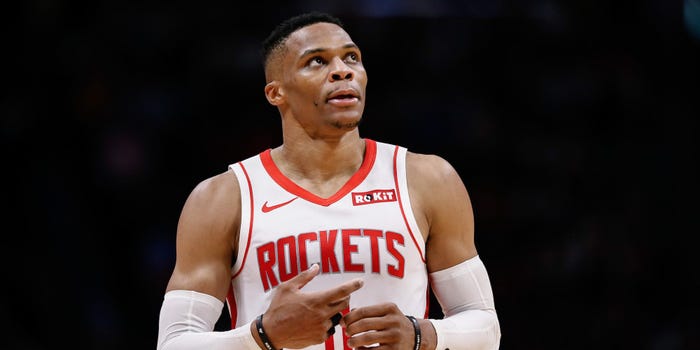 One year after landing Russell Westbrook in a trade with the Oklahoma City Thunder, the Houston Rockets are searching for new destinations for the star guard.

The Athletic's Shams Charania reported on Wednesday that Westbrook is unhappy in Houston and would like to be traded.

According to ESPN's Brian Windhorst, the Rockets can trade Westbrook — but they likely won't get much in return.

"A trade option for Westbrook is limited," Windhorst said on ESPN. "There is not much of a trade market for him for value. They could certainly trade him, but they may either have to incentivize trading him because of how much money he has left [on his contract] by adding pieces, or they may have to take back bad contracts for players who aren't as good."

Westbrook's contract and age are a problem

Westbrook signed a five-year, $206 million contract extension with the Oklahoma City Thunder in 2017 while coming off an MVP season. He has three years, $132 million remaining on that contract. The final year of that deal is a player option worth $47 million in the 2022-23 season.

Any team trading for Westbrook will have to brace for him to pick up that option, which will account about a third of their cap, when he is 34 years old.

This is the quandary teams face when signing franchise stars to new contracts: retaining the best player at a crippling cost.

The Thunder may have been wise to get off of Westbrook's contract when they did — one year after signing him. (Of course, he was involved in the process, agreeing it was time to move on after Paul George had requested a trade to the LA Clippers).

The Rockets-Thunder deal in the summer of 2019 was unique in its fit. The Rockets dealt Chris Paul, another aging point guard with a contract worth over $40 million per year), plus future draft picks for Westbrook in what amounted to a salary swap.

It won't be so easy for the Rockets to find a team willing to swap star players at similar costs this year.

As Windhorst noted, the Rockets might be lucky to get a young prospect and a future draft pick back in a deal. Or it might mean taking back an unsavory contract, such as (hypothetically) Nic Batum's $25.5 million salary for the 2021 season. If the trade market is truly bare, the Rockets might have to incentivize a team with future draft picks or another rotation player to take Westbrook.

Westbrook's contract and age further complicates the question of just how much he's worth for team contemplating acquiring him.

Westbrook's skillset makes him somewhat tough to build around. He's a ball-dominant player who doesn't space the floor or defend within a team system. Since 2014-15, he's the only player in the NBA to attempt over 2,000 three-point attempts and shoot less than 31% on those attempts, making him arguably the worst volume shooter in the league.

Over the past three seasons, his teams have defended better when he is off the court. Westbrook is good at forcing turnovers, but has a bad habit of gambling and leaving his assignments to try to create steals and deflections.

Last season, Westbrook had success off the ball while playing next to Harden. Harden would often isolate, drawn an extra defender, then kick the ball to Westbrook who could attack an unbalanced defense, getting to the rim or setting up a teammate with an open shot. He was more active off the ball than he had been in years. According to The Athletic, Westbrook wasn't thrilled with this secondary role and would like to go back to being a lead ball-handler.

Westbrook is also a triple-double threat every time he steps on the floor. He can score 30 points without a reliable three-pointer. He brings a certain amount of force and aggression that other teams can't match. His teams have all had a positive net rating when he's on the court.

The Thunder didn't get past the first round of the playoffs in Westbrook's three years without Durant. Last year's Rockets barely got by the Thunder in the first round, then lost to the Lakers in five games in the second round.

Westbrook's weaknesses are more glaring in the postseason, but it can also be said that his presence increases a team's chances of getting there in the first place.

There might not be a more complicated player in the NBA than Westbrook. Championship contenders must ask if Westbrook puts them over the edge and fits with other star players. Lottery teams must ask if Westbrook, even at a reduced trade cost, fits their timeline or does much more than get them to the eighth seed. It is difficult to find aa team that needs a lead guard, has the pieces that fit around Westbrook, and can justify paying his salary because he'll elevate them to another level.