JUST FRANK looked well up to this Listed level when running away with a big Newmarket sales race by more than five lengths. 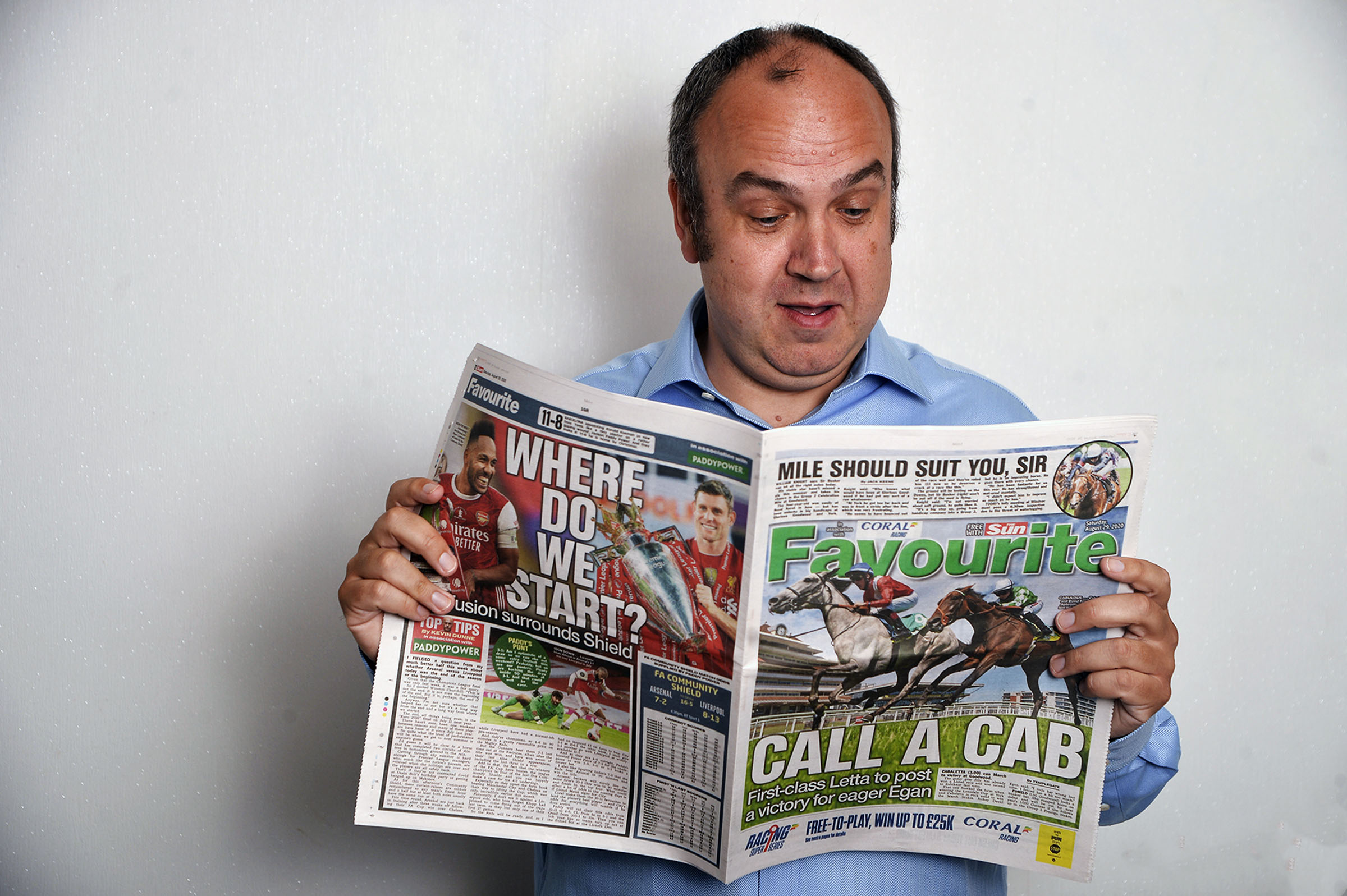 Bet £5 on 14.05 at Cheltenham Saturday, Get £5 Free Bet for all other Cheltenham races with Betfair

That was over this trip in testing conditions so he’ll have no problem with this ground. He looks the type to improve again for veteran trainer Les Eyre.

Zamaani was a close second in the Two-Year-Old Trophy at Redcar when relishing this distance. He goes from the front and William Buick’s mount could be hard to pass.

Lipizzaner isn’t one of the leading lights at Ballydoyle but he was a solid second in a Curragh Group 3 13 days ago and is respected under Ryan Moore.

Shark Two One deserves this step up in class after winning as he liked at Redcar last week. That was his second good victory of the season and he should be thereabouts.

ORVAR goes well at Doncaster and saves his best for softish ground like he’ll get today. He is just 2lb higher than when winning nicely at Chester earlier this season and the booking of William Buick is a major plus.

Mighty Spirit has been knocking on the door and went close in hot company at York 15 days ago. That run was all the better because he was slow away and had to make up a lot of late ground. He’s off the same mark and will make his presence felt.

Venturous looks very well weighted when you take his rider’s 5lb claim into account. He ran a belter when third at Chester before meeting traffic problems at Wolverhampton. A clear run would give him a massive chance.

Tanasoq has had a wind op since going down by less than two lengths at the St Leger meeting here. The handicapper has given him a chance and conditions should suit.

WEMBLEY has hit the crossbar in Group 1s on his past two starts and can get a deserved victory.

He looked to be crying out for this mile when finished well over a furlong shorter in the Dewhurst at Newmarket two Saturdays ago. Give in the ground is right up his street as it was soft when he went close in the National Stakes at The Curragh.

It could be an O’Brien battle as Joseph’s State Of Rest looked very smart when third behind Chindit in the Champagne Stakes at the Leger meeting here. The worry with him is the ground as it was fast last time.

One Ruler was impressive in taking the Group 3 Autumn Stakes at Newmarket earlier this month. He is already proven over this mile and trainer Charlie Appleby continues to fire in winners.

King Vega could improve plenty after going close in a Sandown Group 3 on just his second outing. He was running on strongly at the finish so stepping up in trip should help.

Jim Bolger wouldn’t send Mac Swiney over without a chance. He didn’t shine in the National Stakes but has a Group 2 win on his CV and likes it soft.

ALLMANKIND was an excellent third in the Triumph Hurdle on his last visit to Cheltenham and looks the one to beat.

He won the Grade 2 trial for that race in November so the track suits well. He’s having just his fifth run over timber here so should improve over an ideal trip.

Stratagem is interesting with Harry Cobden taking over from owner and usual amateur rider David Maxwell. He was on board when winning by miles at Kelso last time. This is a real hike in class but Paul Nicholls won this last year with another French import.

Anna Bunina has been running well in Ireland and could try to nick this from the front under Richard Johnson. She’ll have to improve but can’t be discounted.

Nordano is fit from the Flat and signed off last term with a 16-length handicap win at Ascot. He was fourth behind Allmankind here in November so needs to take a step forward from that.

Botox Has was second that Triumph trial and looks a bigger threat. He hasn’t been seen since winning well here in December but has won after a break before.

PILEON has been thrown into the deep end for this chase debut but, with questions about his rivals, he can make a winning start.

He went down in a photo for the Martin Pipe Hurdle at the Festival on just his fourth timber run. He saw out this distance well there and it’s telling that Philip Hobbs sends him quickly over the bigger obstacles.

Not That Fuisse clocked a personal best when winning at Perth on comeback last month. He jumps well and has plenty of talent but he’s failed to get up the hill on both runs here over this distance.

Southfield Stone was good enough to finish a close second in the Grade 2 Pendil Chase at Kempton when last seen in February. He has had a wind op since then and would be a big threat if handling this very different track.

Coole Cody was a solid hurdler who has done well with a win and second in his two chase outings at Newton Abbot. This is a much tougher ask but he doesn’t lack for stamina and should have more to offer at a track where he has winning form.

TOBEFAIR has a cracking record at Cheltenham including when winning this race last year. He returns from effectively 2lb lower in the weights when you include his excellent young rider’s claim.

He stepped up in class after taking this and finished with a good sixth in the Stayers’ Hurdle at the Festival and his stamina is an asset.

Ballon Onabudget was full of running when winning over further at Newton Abbot last month and will love this stamina test from a fair mark.

Neville’s Cross takes on tougher opposition here but had 20 lengths in hand when scoring at Hereford on top of a Uttoxeter success. There should be a lot more to come.

Flinck is climbing the weights but went well in the red-hot Silver Trophy at Chepstow and shapes as though this longer trip will be fine.

Lock’s Corner keeps on winning over fences and hurdles. He is up 10lb for a Bangor chase win but is clearly in great heart.

MANOFTHEMOUNTAIN looked a potential superstar when winning at Bangor on comeback and he can mix it with the big boys.

He jumped beautifully at the Welsh track and was value for a lot more than the one-length winning margin. He stays well and can improve again.

Cogry has won and placed in the past three runnings of this and is a fair 3lb higher than his Grade 3 Betvictor win here in December. He wasn’t right when pulled up in the Ultima at the Festival and rain would help his chances.

Frodon won the Ryanair here over 2m5f in 2019 but was hit and miss last season including when defending that title. He’s respected but will probably need this.

West Approach lost his way as last season progressed but he was second in this race before winning a Grade 3. He stays well and this is his time of year.

Bob Mahler is consistent and showed his liking for Cheltenham when third in the Kim Muir in March. He does nothing but stay and will be running on at the finish.

LANEQASH started his career in style with an easy Ascot maiden win before taking a big leap forward for a close second in Listed company here.

The winner and third from that contest have gone on to take Group contests so the form looks strong. The only concern is the much softer ground but he’s related to winners on it.

Fellow Hamdan horse Mujbar wasn’t disgraced in the Champagne Stakes at Donny last time and won his maiden with plenty of give underfoot.

Existent warrants respect from John Gosden after a heavy ground maiden win at Newmarket. This is much tougher but there’s a lot more to come.

Nastase relished testing conditions when coming late to win nicely at York over six furlongs. He should appreciate going up in distance and run well.

Saint Lawrence was a Listed winner over this trip in sticky going before a modest effort on Town Moor. This track clearly suits and he’s down in grade too.

NATURAL HISTORY loves bottomless ground and has done little wrong with a pair of good wins since coming back from two years off. He struck at Chester before an easy Goodwood success in the mud.

This is a hike in grade but trainer Andrew Balding is in good form and conditions are ideal.

Raymond Tusk is interesting coming back from a long break. He’s a thorough stayer who was fourth in the Ebor last season so has enough class to figure if fit enough.

Euchen Glen has really found his form and landed the Group 3 Cumberland Lodge ahead of Logician at York last time. He stays all day and will be powering on at the finish.

Alounak hasn’t won for a while but he’s been keeping decent company and was caught out by a muddling pace when sixth at Windsor. His best form would give him a chance.