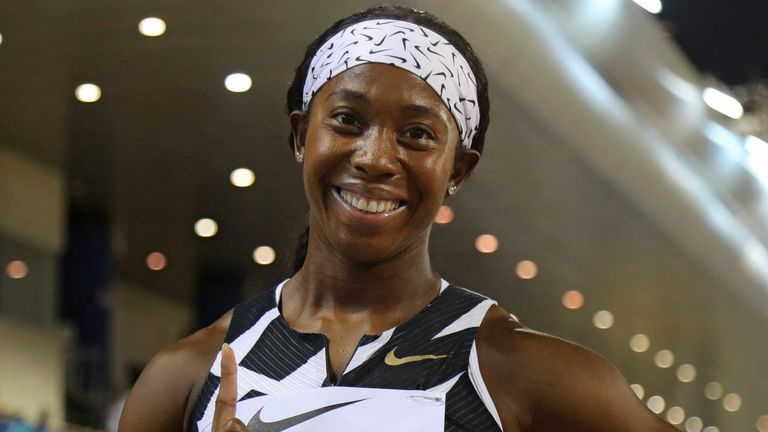 Jamaican sprinter Shelly-Ann Fraser-Pryce became the second-fastest woman of all time behind 100 metres world record holder Florence Griffith-Joyner when she clocked 10.63 seconds at a meeting in Kingston on Saturday.

Double Olympic champion Fraser-Pryce, who laid down a marker ahead of next month’s Tokyo Olympics with her searing sprint, said her speed had taken ever her by surprise.

“Honestly no, I never expected I would run 10.6 and think it’s a good thing because there was no pressure,” said Fraser-Pryce.

“I just wanted to get one run in before the (June 24-27) national championships and that’s what I was really looking forward to.”

But Fraser-Pryce shaved 0.01 seconds off Carmelita Jeter’s 10.64 set in 2009 to climb behind Griffith-Joyner on the all-time list.

Running in an empty stadium in Kingston at the JOA/JAAA’s Destiny Series, she decimated the field in the first of three heats from a rocket start, to finish ahead of former world championship finalist Natasha Morrison.

Fraser-Pryce, the reigning world champion after winning gold in Doha in 2019, said she had already set her sights on her next target.

“I’m lost for words because 10.6 has been a dream, a goal, I’ve been working so hard, being so patient to see it finally unfold. I’m so ecstatic,” added the 34-year-old, who set her previous personal best of 10.70 seconds nine years ago.

“If I’m able to run 10.6 now… I’m just looking forward to what the process will bring. I’m continuing the work because I did say that this year I wanted nothing more than to break the 10.7 barrier and I did it.

“But now the focus is on making the national team then taking it from there. This is just one part of the puzzle, so you can’t get too complacent and comfortable.”