In the N.C.A.A. women’s basketball tournament, the only sure thing is that there are no sure things. There will be upsets. Few people will see them coming. And they will ruin some brackets.

Upsets are also fun, surprising and lend the games intrigue.

When predicting potential upsets, there are many factors to consider, like matchups and strength of schedule. Sometimes, it’s just a gut feeling.

Here are six upsets we could see in San Antonio:

Here’s a wacky pick, because we can’t just pick No. 9 seeds over No. 8 seeds. The Bengals went 22-3 this season, including a whopping 84-49 win over Idaho in the Big Sky championship.

They allow just 59.2 points per game, and keeping that number around there would be key; Kentucky — which averages 79 points — did not lose a game this season where it scored at least 59 points.

Kentucky (17-8) gives up 65.8 points per game and Idaho State averages 71.4, a closer gap. There’s always the strength-of-schedule factor to consider, which this year is tougher to interpret: More teams stayed in-conference and played locally because of coronavirus restrictions, so some teams haven’t been challenged as much.

That makes predicting upsets even trickier. Pulling one off still takes catching a higher-seeded team off guard.

Rhyne Howard makes up much of the Kentucky offense. Shutting her down is easier said than done, but Idaho State has more of an ensemble cast to work with. Estefania Ors is a tremendous shot who made four consecutive 3-pointers in the Big Sky title game.

The Bengals’ field-goal percentage defense of 35 percent is the 14th best in the nation. They could slow down the Wildcats.

But like most upset possibilities in this tournament, this one is a long shot.

No. 10 Marquette Over No. 7 Virginia Tech

The 14-9 Hokies finished seventh in the A.C.C., and this is their first at-large N.C.A.A. tournament bid in 15 years.

It could be a high-scoring affair; Marquette is 18-2 in games where it scores at least 65 points. Virginia Tech averages 61.4, but still has six losses when reaching that total.

Selena Lott, a senior guard for the Golden Eagles, is a tremendous scorer, and if they make a run, she’ll be the one making headlines. Marquette’s 1.27 assist-to-turnover ratio is the 17th best in the nation.

The Golden Eagles (19-6) could also have a chip on their shoulder after losing the Big East title game to UConn by 34 points.

They match up well with the Hokies, and if it becomes a high-scoring game, that will play in their favor.

All right, this one might seem a little wacky, too. Lehigh has an impressive 3-point defense, the 19th best in the nation at 26.2 percent allowed. If the Mountain Hawks shut down West Virginia early and go on a run, that could be enough to put them on top.

The Mountain Hawks have been playing for their lives for a while. They upset top-seeded Bucknell in the Patriot League tournament before controlling the conference championship game with second-seeded Boston University throughout. 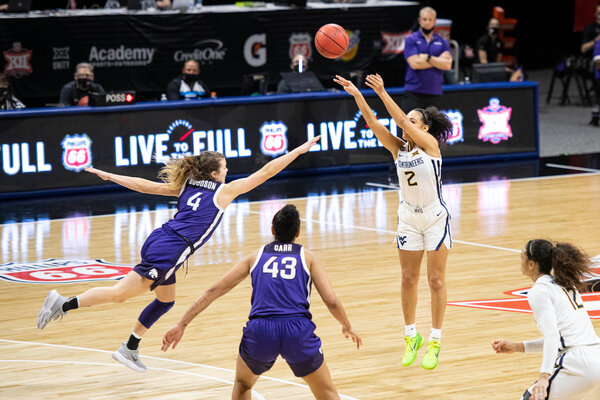 They didn’t start their season until January and still played 15 games. That they led the league in scoring was impressive in its own right.

A solid 1.32 assist-to-turnover ratio, for 11th best in the nation, also stands out. Lehigh is a sneaky squad.

No. 10 Florida Gulf Coast Over No. 7 Michigan

Florida Gulf Coast (26-2) is the best 3-point shooting team in the nation.

Once Kierstan Bell, a transfer from Ohio State, joined the Eagles, they didn’t lose a game. It took until November for her to become eligible as a transfer, but she has paced their tremendous season.

Michigan (14-5) is headed in the wrong direction. The Wolverines scored just 49 points in a loss to Northwestern in the Big Ten tournament. Naz Hillmon is a star and netted 50 points herself on Feb. 21. It’s unlikely that she’ll repeat that kind of performance, but the Eagles will still have to shut her down.

The Eagles’ 23.6-point scoring margin, fifth best in the country, stands out as well. Given the Wolverines’ struggles, it seems the Eagles’ best chance would be to jump out ahead early and keep playing the dominant style they’ve found success with already.

The Spartans (15-8) had a nice run to the Big Ten tournament semifinals in one of the most competitive conferences in the nation.

Nia Clouden is going wildly overlooked. Perhaps it’s because the Big Ten is so deep with superstars. A couple of solid games in San Antonio and she won’t be overlooked for long.

Two Iowa State freshmen, Lexi Donarski and Emily Ryan, have led the shooting for the Cyclones (16-10). They’ve defeated squads like West Virginia and Baylor this year.

The Spartans have been impressive dealing with injuries and still making a strong run in their own conference.

The two teams have a common opponent in Iowa, whom they both lost to, but Michigan State also has a December victory over the Hawkeyes.

Stephen F. Austin has won 19 games in a row. The Ladyjacks’ defense is tremendous, and they have a well-distributed offense.

Georgia Tech has gone seven consecutive contests without reaching 70 points. The Yellow Jackets’ defense is stellar, but at times they struggle to put up points.

Stephen F. Austin leads the nation in steals and forced turnovers. It’s conceivable that if the Yellow Jackets never get going on offense and their defense is worn down by extra Ladyjacks possessions, they could fall into a hole and never recover.

Stephen F. Austin’s 50.9 points per game allowed is the fifth lowest in the nation. Their 1.51 assist-to-turnover ratio is the third best. There’s no such thing as an easy upset pick, but this one stands out more than the rest.