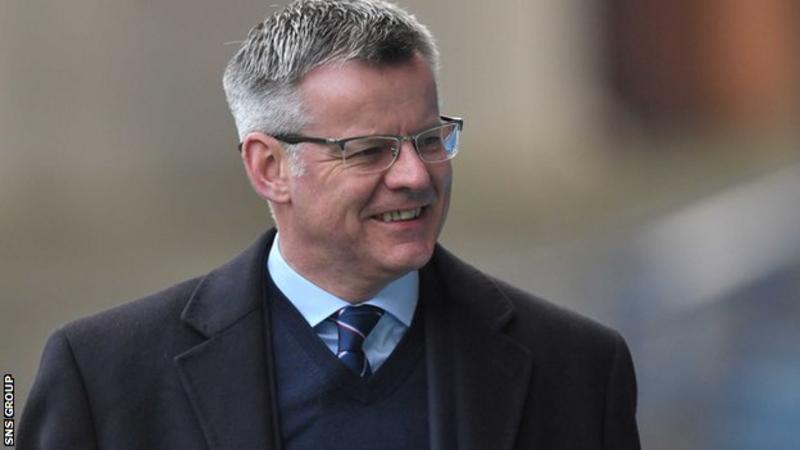 Rangers claim clubs were not informed of a potential £10m liability and “substantial problems” with league reconstruction before they voted to end the season.

The Ibrox club say the information was omitted from the briefing paper sent to clubs before the vote and was not approved by the SPFL board.

Rangers circulated a dossier to the other 41 clubs on Thursday.

The SPFL says there is no evidence to support claims of bullying or coercion.

Clubs are examining the documents, with a vote on the need for an independent investigation set for 12 May.

“Since Rangers publicly demanded the suspension of the SPFL’s chief executive and legal counsel, everyone in Scottish football has waited patiently for them to present their case,” an SPFL statement added.

“However, an initial examination of their ‘dossier’ has failed to identify a single shred of evidence to support Rangers’ vociferous claims of corruption, bullying and coercion by SPFL staff.

“If Rangers have any good reason for Neil Doncaster and Rod McKenzie to be suspended, we have yet to see it.”

The vote to finish the season – which also gave the SPFL the authority to end the Scottish Premiership – was passed when Dundee belatedly changed their initial vote against the proposal to a yes.

After it was passed, the league set up a taskforce of 15 representatives from clubs, chaired by Ann Budge of Hearts and Les Gray of Hamilton Academical, to examine league reconstruction to potentially prevent clubs from suffering the effects of relegation.

The SPFL commissioned auditors Deloitte to review the circumstances surrounding Dundee’s ballot, which found no wrongdoing on the part of the league’s staff.

But Rangers criticised the “narrow scope” of that inquiry, and want the whole process examined having previously called for the suspension of SPFL chief executive Neil Doncaster and its legal advisor Rod McKenzie.

The EGM set for next week was forced by Rangers – backed by Hearts and Stranraer – who need the support of 32 clubs for an inquiry to take place.

An SPFL board meeting is scheduled for 14:00 BST on Thursday.

A meeting of the 12 Premiership clubs – and Championship winners Dundee United – has been delayed until Friday as they digest the contents of Rangers’ evidence.