But long after the single-game scoring outburst and this year’s playoff race are forgotten, the night will be remembered as the one where Curry passed Wilt Chamberlain as the Warriors’ career scoring leader. His postgame total of 17,818 surpassed Chamberlain’s 17,783. Rick Barry, Paul Arizin and Chris Mullin trail them.

“Any time you hear his name,” he said of Chamberlain after the game, “it’s kind of daunting, because you know his records are so hard to — some of them are even impossible to eclipse.”

Though surpassing Chamberlain in anything is momentous, team scoring records are something of a quirky statistic. They reward great talent, naturally, but they also reward longevity at a single franchise.

The Sacramento Kings’ career scoring leader is Oscar Robertson. If you don’t remember the Big O lacing them up in Sacramento, that’s because he played for the Cincinnati Royals, who didn’t arrive in California until the 1985-86, after a stop in Kansas City. Still, the record is his.

The all-time leader of all-time franchise leaders is Karl Malone, who scored 36,374 of his 36,928 points during his 18 seasons with the Utah Jazz. (The other 554 points were added in a late-career cameo with the Lakers at age 40.) 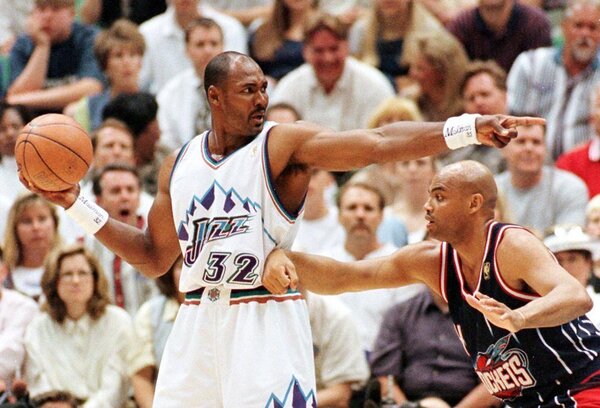 No one has scored more N.B.A. points than Kareem Abdul-Jabbar, who has 38,387. He ranks first on the Milwaukee Bucks’ career list despite leaving after six seasons (with Giannis Antetokounmpo in hot pursuit). Abdul-Jabbar is also in good company on the Lakers list, behind only Kobe Bryant and Jerry West, who spent their entire careers in Los Angeles.

The only players in the overall scoring top 10 not to lead a team are Shaquille O’Neal, whose prime years were divided among the Magic, Lakers and Heat, and Moses Malone, who played for seven N.B.A. teams (and two in the A.B.A.).

Even though O’Neal, Malone, and now Chamberlain are not among them, the roster of franchise scoring leaders are virtually all great players. Only two of those who are eligible are not yet in the Hall of Fame. And one of those, Walter Davis of the Suns, who made six All-Star teams and tallied 19,521 total points, maybe should be.

Perhaps the most forgotten team leader (could it be because of his common name?) is Randy Smith, who poured in 12,735 points for the Clippers franchise, mostly when they were the Buffalo Braves. Just a seventh-round draft choice, he wound up being known as the Iron Man for playing in 906 consecutive games (a record later broken by A.C. Green).

At the bottom of the team leaders chart are the Nets, who have suffered from not keeping their superstars around. Buck Williams left after eight seasons, Vince Carter after four and a half. Julius Erving remains the most famous Net for many, though he played with them for just three seasons, all in the A.B.A. Nevertheless, he’s seventh on their career scoring list.

At the top of that list is Brook Lopez, whose 10,444 points for the Nets were 4 more than Williams. Lopez won’t be adding to that total, as he was traded away in 2017.